August 26 – September 3 2011
Once again the wind only played the game for a couple of hours with a sea breeze through the middle of the day so the rest of our passage to the planned overnight anchorage at the little uninhabitated island of Gilli Bodo was another uneventful case of motor-sailing across very calm, crystal clear waters. We were joined by a pod of dolphins for some bow wave surfing for a while which provided great entertainment for them and us.
﻿
﻿
﻿
We arrived at Gilli Bodo at about 1.00pm which would normally be perfect conditions for seeing the fringing reefs but unfortunately the sky had greyed over with a thin combination of cloud and tradewinds haze which made visibility difficult. With Milin on the helm, Rob stationed on the bowspit, Karen on the port side and Marc on the starboard we slowly picked our way through the extensive coral and into the fairly narrow channel to the island’s anchorage. We did get close once but fortunately avoided any little love taps with the bottom.
We were rewarded however with a fantastic place to spend the afternoon and evening. Anchored in almost 20 metres of water we could see the sandy bottom and the reefs provided absolutely protection from every inch of ocean swell. We crew skipped lunch, had the dingy launched complete with snorkelling gear and were exploring the golden sand beaches and fantastic coral reefs almost before the engine was switched off. The snorkelling set a new standard with very little damaged coral seen. Instead it was alive with colour, big beautiful clams and loads of fish. Karen and Rob had great fun playing peekaboos with a big flowery cod that was hiding under a large plate coral. When Rob dove down near it, the fish would try to slink out the other side of its hidey hole only to find Karen waiting there for a closer look. It would then shoot out the other way almost running into Rob’s mask before doing a quick u-turn back to safety. The little clownfish on the other had charge out of their holes in the coral at you putting on a big show. We’re sure the Fishspeak – English translation goes something “ Bugger off. This is my spot.” There were also rumoured to be plentiful crayfish in the area but despite spending about three hours in the water they managed to evade our gaze and thereby also avoided our cooking pot. Gilli Bodo did set a new standard for snorkelling so far on the trip though. 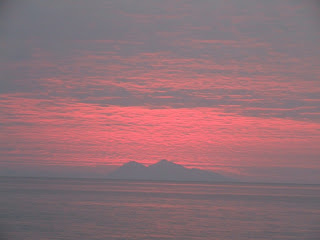 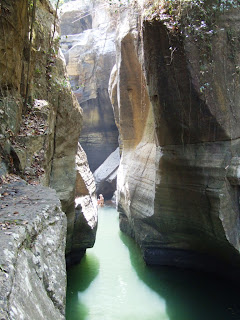 Our guide was able convey the message that to see the falls you swam up through the two meter wide, sheer walled ravine. After surviving both the drive and jungle descent, none of us were going to miss actually eyeballing the falls. Rob was first in and lead we five intrepid adventurers against the current brushing away the spider webs spun across the ravine as he went. We were well rewarded with the sight of fresh mountain water cascading not down a rock face but actually through a huge hole in the smooth granite that had been warn away by thousands of years of constant flow. Unfortunately none of us had a waterproof camera so sorry – image not supplied. Besides, if you want to see this wonder of nature you too should have the excitement of the lunatic loose behind the wheel and the mountain goat trek through the jungle.
We really did enjoy a great swim for a couple of hours while we recovered and prepared for the climb back. The good news about our early departure was that we had the falls to ourselves with the first other tourist arriving as we were preparing to leave. The bad news was that we were climbing out at Noon, the hottest and, more significantly, the most humid part of the day.
﻿
﻿
﻿ Onboard the boat we have both been reading Peter Fitzsimons’ fantastic account of the battle for Kokoda Track and very early in our climb back out from the valley floor our thoughts quickly went to how tough those diggers must have been doing it in far more atrocious conditions, lugging weapons, ammunition and supplies while all we carried was a light back pack with the added advantage of not having anyone shooting at us.
With no breeze penetrating the thick rain forest and the humidity at 100%+ the air was so thick you could almost cut it with a knife. Unfortunately it was this factor that was to be Karen’s undoing. The trail was exceptionally steep in the lower part. In many areas we needed to use tree roots and whatever was available as hand holds to haul ourselves up. About 20 minutes into the climb, Karen’s chest began to tighten with asthma, a problem that hasn’t surfaced at any stage during our Indonesian adventures. Fortunately she always carries her inhaler with her as a precautionary measure. So with a few good puffs and many rest stops we eventually emerged back into the sunshine of the village and our four wheeled dash down the mountains with Lunatic. 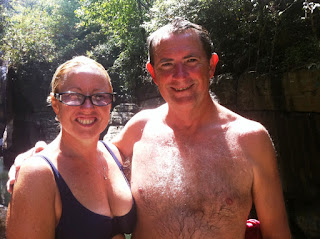 Fortunately our visit to the limestone caves just outside Labuan Bajo itself proved less athletic with only some crouching and a little crawling through low spots involved to experience a truly wonderful piece of geology complete with fossilised fish and turtles in the cave walls proving the area had at some point been part of the ocean floor.
We enjoyed some well deserved cold drinks and another great meal that night, this time at the Tree Tops Restaurant. Rob had a huge feed of big local king prawns for the equivalent of $5.00 Australian while Karen enjoyed a very tasty Indonesian Chicken dish with a big serve of Gado Gado vegetables.
﻿
﻿
Unfortunately when Friday dawned Karen was still feeling just a little tight in the chest from the previous day’s exertions so, despite her insistence that all would be fine, Rob erred on the side of safety and after all the previous struggles to get on a dive trip, reluctantly headed ashore to cancel our booking.
We have now spent a week on the doorstep to the world’s best dive sites and have not been in the water. Even worse, later today we are going to sail straight past them, and numerous other boats from the Rally anchored there and not stop. We really have to get our own boat.
To stay right up to date with what we’re up to these days and see lots more photos check out and 'like' our Dreamtime Sail Facebook page at Dreamtime Sail on Facebook