5 -10 September 2011
When we upped anchor and left Labuan Bajo the plan had been to sail straight through to Medana Beach on North Lombok with the trip planned to take two and a bit days including two nights. We headed straight out to sea well clear of the islands of the Komodo National Park to avoid the tricky currents that are common around the three major straights in the area that connect the Pacific and Indian Oceans. The water here is extremely deep but there are a number of huge under sea mountains, so when the water rushes through from one ocean to the other with the tides these underwater obstructions generate some really weird eddies and back currents.
﻿
﻿
As it turned out we ended up with a strong current pushing us along and surprisingly a 15 knots wind kicked in so we made a lot better progress than anticipated. For the first night, luck of the draw saw Rob with the midnight to three am watch with Karen following on from there so we headed to bed early to try to get some rest before hand but with the boat getting pretty rollie in a partially beam sea it was pretty much a forlorn hope. More so when all of a sudden about 9.30pm the wind unexpectedly whipped up to 25-30 knots in an instant and caught us totally overpowered with full main and headsail out. We were quickly on deck to help get things reefed down and back under control.
Taking over at midnight Rob enjoyed a pretty good sail for almost all of his watch and then the wind disappeared almost as quickly as it had arrived. So much so that he furled away the headsail completely and started motoring just before Karen took over for three hours of chug chug. Even so when dawn broke we were far further along than planned which provided its own dilemma. If we kept going for Lombok we’d arrive at our anchorage at Medana Beach Marina in the early hours of the following day and have to negotiate our way in through the reefs in the dark. Not a good idea so Milin came up with plan B and just after lunch we anchor up in the lee of the delightful little island of Palua Madang in an extremely remote area just off the north coast of Sumbawa. 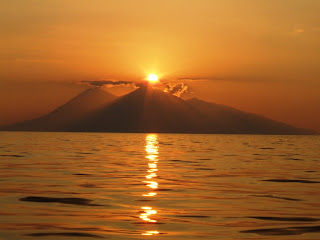 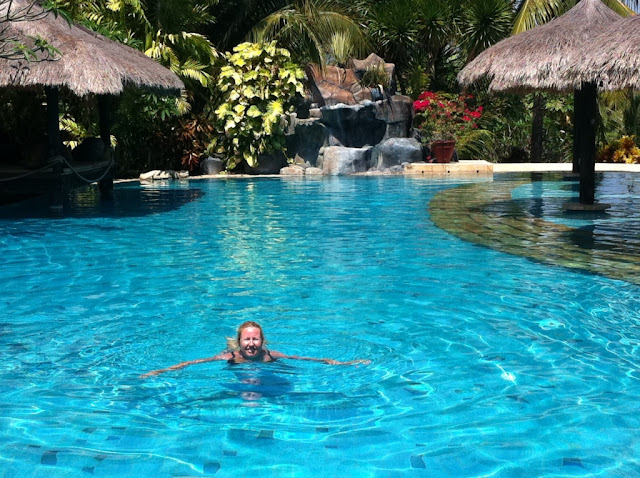 Lombok is a large island we have been very much looking forward to exploring so on Wednesday morning we headed up to the ATM in the nearby township by the local pony and cart taxi service to top up the cash reserves before heading off. The six kilometre round trip took about an hour and cost less than $3 each. It was a real experience as trucks, cars and untold motor scooters wound their way around our trotting pony and little cart on the main coastal road.
The population here is predominantly Muslim and while not as hectic and crowded as Bali, the island has certainly embraced the tourist dollar with a lot of development over the last decade or so. It’s becoming increasing popular though with much of their marketing describing Lombok as “like Bali 20 years ago.” The catch 22 is that if they’re successful with their campaigns, Lombok may soon be “just like Bali now.”
﻿
﻿
﻿
﻿
Just nearby to our anchorage are the three perfect coral islands, fringed with white sand and swaying palm trees laying in sparkling clear waters off the north west coast. Over recent years the Gilis have been come very popular with western backpackers and visitors looking for something beyond the Bali experience. Gili simply means small island but these three are a bit special and have become known collectively as the Gilis. There are no cars or motorbikes on the island and other than walking the only form of transport is by pony and cart known locally as cidomo. (ch-id-o-mo)
All three islands have developed separately and have their own character and style. Gili Air is the closest to the mainland and has the largest population of local people. It also has a good anchorage and many of the Rally boats chose to stop here rather than at Medana Beach. With good restaurants, great snorkelling, diving and even a good surf break why not.
Gili Trawangan is the largest and furthest away but most famous of the three with a reputation as a party island. Popular with the younger crowd there is no shortage of bars, clubs, watersports of all varieties and accommodations options ranging from cheap home-stays to up market 5 star resorts. 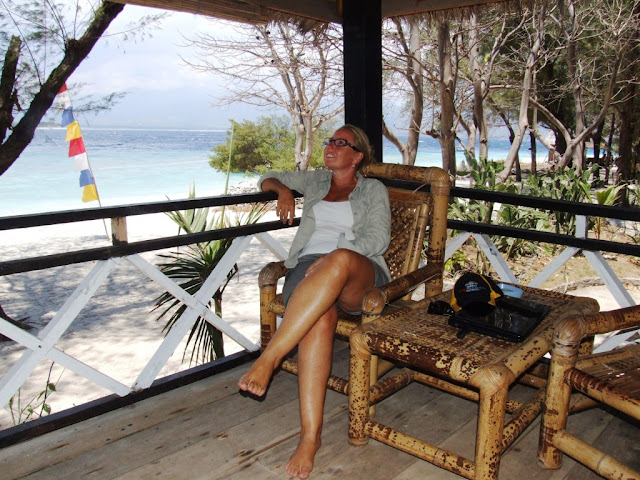 In the middle, Gili Meno is the smallest, with lowest population and least developed. This is where we decided to spend a few relaxing days getting away from it all before heading off for some exploring on the main island and what a good choice it was. The island has a laid back, castaway feel with small restaurant bars and beach hut accommodation. We stayed at the “Malias Child” in a nice little hut literally on the beach and only five metres from the high water mark for the equivalent of $45 a night including breakfast. This was actually one of the dearest places on the island but we couldn’t go past the location. Their restaurant also featured private bamboo pavilions built over the beach in which we were served a great range of Indonesian or western style food while we reclined with a cool drink on plush cushions gazing on the unbelievable scenery and, much to Rob’s delight, a never ending parade of skimpy, bikini clad backpackers passing by. (Not that Karen wasn’t also enjoying the equivalent stream of fit, young six pack equipped travellers)
﻿﻿
﻿
Forty metres down the beach was another similarly laid out resto which has the most amazing seafood bbq at night. Take your choice of big, whole fish, hige prawns, fresh squid or an array of fish steaks and fillets. Karen chose a huge marlin steak while Rob went for a very big, whole squid which were both beautifully bbq’d on the spot and served with a baked potato, whole bbq’d corn cob plus salad. Throw in a few drinks and the bill was $19.
We needed the two and half walk circumnavigating the island next morning to wear some of our excesses off. We were really pleased to find out Gili Meno is a sea turtle sanctuary with an active program where turtle nests are guarded by locals and when the hatchlings dig their way to the surface from deep in the sand they are taken and raised in protection to a larger size more likely to survive before they are released to the wild.
﻿
﻿
As recently as 2007 there was a problem with Chinese poachers who reportedly took over 150 mature turtles and an estimated 10,000 eggs from the area. As Karen’s favourite sea creature is the leatherback turtle she was delighted to be able to get up close and personal as one group of little turtles went through bath time with each shell lightly scrubbed with a brush before their pond was thoroughly cleaned and filled with fresh sea water.
Life is good on Gili Meno.We’re supposed to head off exploring more of Lombok tomorrow but it may be hard to leave our latest piece of paradise. Whatever happens, we need to be back on Nae Hassle on the 14th to head for Bali. Time, and the next episode of our blog, will tell.
﻿
﻿
To stay right up to date with what we’re up to these days and see lots more photos check out and 'like' our Dreamtime Sail Facebook page at Dreamtime Sail on Facebook

If you have only recently discovered our blog and would like to read how it all started, or work through our previous adventures, click the link to go back to our first blog entry. Stuff it. Let's just go sailing anyway.  We hope you enjoy reading the previous posts to catch up on our story.
﻿
﻿