Lizard Island to the top

Saturday 25 – Sunday 26 June.
Even sheltered in Watson’s Bay at Lizard Island we have been experiencing 15 to 25 knots of wind constantly so have left the anchor firmly dug in while we laze around, catch fish and get to know each other a bit more. Each morning and afternoon we tune in to Cairns Volunteer Marine Rescue for the latest weather up date. By now we feel like we are suspended in some sort of groundhog day joke as every broadcast has been identical,  strong wind warning – 25 to 30 knots from Torres Straight to Cardwell for the foreseeable future with the additional reminder that wind gusts of up to 40% stronger could occur.
We actually have a deadline to get to Darwin because not only are we supposed to be there by July 9th to allow two clear weeks to arrange our visas and cruising permit with the Indonesian consulate, but also as Colin and Milin have arranged for a new forestay to be fitted in Darwin before we head into Asia. The forestay is 14mm stainless steel cable which not only holds the Genoa (front sail ) on but also holds the mast up so it’s a fairly important part of the boat. With three days already being lost sitting at Lizard Island we are all getting a bit anxious. We know every day at anchor probably means an extra night under sail on the way around the top.
During the course of Sunday afternoon two yachts and a two catamarans arrived from the south and told us that while the winds were strong they were fairly steady and they’d had no problems, hence the decision was made to up anchor first thing in the morning and head Nae Hassle north again.
Monday 27 – Wednesday 29 June
By 7am we had everything secured away and set just a reefed mainsail for the run back towards the mainland and up the coast.  With 20 to 25 knots behind us we were quickly rocking and rolling along. 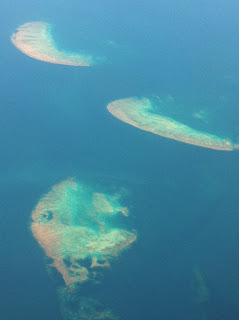 Because of the days lost at Lizard Island we have now put a line through overnight stops at a couple of anchorages on the way up the coast and are pushing on straight through to Mt Adolphous Island just north of the tip of Cape York, a trip of 340 nautical miles. The target is to reach it Wednesday afternoon for a night at anchor before leaving early the next morning. This will ensure we have a favourable tide for the run through Torres Straight where currents are really strong.
North of Cairns the Great Barrier Reef gets closer and closer to the coast.  Not only do we weave in and out making our way around the masses of coral reefs but for most of the trip we share the main shipping channel with tankers, bulk carriers and container ships doing the same thing. During daylight hours you quickly realise A. How big they are and how insignificant they make even a 57 foot yacht like Nae Hassle feel, B. How fast they get from the horizon to right on you, C. How much you hope they are keeping as good a lookout as you are, and D. How easy it would be to do a Jessica Watson and get run over.
At night it’s plain scary at times. While we do all we can to skirt along the edges of the shipping lanes wherever we can, winds etc don’t always make this possible.  Some ships will call you up on the radio to make sure you’re both aware of each other’s plans, others will make an ever so slight course change just to make their intentions clear while some will just steam on ahead, not answering any radio hails and showing no sign of whether they know you’re there or not. One large container ship passed us port to port about 80 metres away on one of Karen’s night watches. They probably knew  we were there but you could never be sure. Forget the old power gives way to sail bit. We just do all we can to stay the hell out of the way.
We pass by some amazing scenery with numerous small islands, what appears to us to be thousands of reefs and a coastline of contrasting lowlands and ranges. The boulders of Cape Melville in particular are a remarkable feature and we had the added drama of squalls passing through as we sailed by in the late afternoon which formed a dramatic backdrop to this Cape. Karen has definitely marked it down as an oil painting waiting to happen. Cape Melville and the hills to the south are comprised of massive, smooth granite boulders piled on top of each other.  Our photographs don’t do the size of these huge marbles justice. Those who wish to climb the rocks are warned in the cruising guide that they are a lot bigger than first impression and of the large number of snakes that inhabit the area.
We’re continuing to keep the freezer topped up with fish. It certainly gets everyone excited when there’s a good one on the line. Our fellow crew guy, Marc, is a Londoner who had never seen fish as big as we’ve been getting let alone caught one. Karen on the other hand was raised with a filleting knife in her hand growing up in the Whitsundays.  We caught a good size spotted mackeral not long after leaving Lizard Island (outside the habitat protection zone of course) but by late on the second day heading up the coast we’d had no luck. I was on the helm with Marc and Karen sitting in the cockpit.  Karen decided to head below to get some sleep before her watch and was disappearing down the companion way when Marc commented to her “I was hoping we’d get a fish before you went to sleep so you could show me how to kill it.” At that point I looked behind the boat and said to Marc, “Well why don’t you just pull that one in.” Sure enough, a very good sized tuna had just taken the lure and Marc got his lesson in killing, bleeding, cleaning and turning a big fish into pan ready steaks. Henceforth he has been dubbed “Marc the be-header” by all on board.
Next afternoon we lost a metre long spainish mackerel trying to lift it onto the boat. We don’t have a gaff and had no hope of getting it in the landing net. Half an hour later Rob was pulling in another nice spotted mackerel when a shark decided to make it his dinner and only left us with the head. BUGGER!
After experiencing  motoring with no wind to 30+ knots and everything in between we passed by the tip of Cape York and reached Mt Adolphous Island right on schedule at 5.30pm on Wednesday afternoon, just in time to get the anchor down in Blackwood Bay and settle in for sundowner drinks. 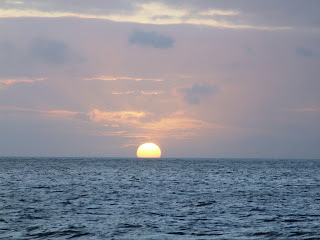 Sundowners are of course the obligatory  refreshment taken while you sit back and enjoy the sunset. We have not been disappointed with the marvels of the setting sun. As Queenslanders we don’t get to see the sun set over water and the colours the sun turns the sky and water on her way down are mesmerizing .
On the subject of sundowners, we observe a strict no alcohol policy while underway but once the anchor is down or mooring ropes on, there’s nothing better than ending a day with great food, a couple of drinks and good conversation.
Lizard Island to Mt Adolphous Island -340.5 nautical miles – 59.16 hours – 5.75 knot average speed with reefed mainsail only – One tuna – Two Mackerel  ( Two more got away)