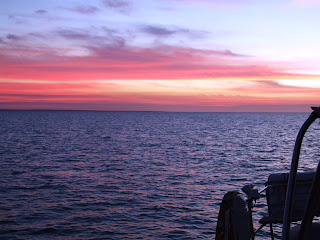 We capped off a fantastic day’s sailing and frivolity with an amazing meal of fresh Tuna steaks in ginger sauce that Milin created. It was without doubt the nicest tuna dish we have ever tasted and was duely washed down with some fine wine while sitting in the cockpit with an absolutely stunning Northern Territory sunset as the backdrop.  Life is good on Nae Hassle.
Oxley Island to Port Essington – 48.3 nautical miles – 8.16 hours – average speed 5.91 knots – 1 Queenfish + shark entertainment.