Like most of the world’s third most populace country, Kupang is a bustling place with over 700,000 people living in the city and surrounding countryside. It has an interesting history with both a Portugese and Dutch heritage and was one of the very first western settlements in the region. Through the early European missionary influence, the population is predominantly Catholic with only 5% being Muslim, however we are still greeted at 4.00am every day by the local Muftis representing the two competing franchises of Islam on shore trying to sing over the top of each other calling the faithful to morning prayers over a very, very loud PA systems.

﻿
﻿
The creek that our beachside bar haunt sits beside is the very spot that Captain William Bligh came ashore after being set adrift in the Bounty’s longboat after the famous mutiny. In an astounding piece of seamanship, Bligh navigated the overcrowded 23 foot (7m) open boat 3,618 nautical miles in 41 days from the mid Pacific, through the Torres Straight to Kupang with no charts or compass and only a sextant and a pocket watch.

Being part of the Sail Indonesia Rally has many distinct advantages for sailing cruisers with many aspects of officialdom streamlined for participants. The organisers even had representatives of Telkomsel, the Indonesian phone company, on site at the bar for four days selling local phone sim cards and wireless internet modems. I was able to get three months unlimited internet download, and a truckload of sms and talk time for my i-phone for the equivalent of $11.50Aus a month. No wonder Telstra and Optus are making so much money at home.

﻿
﻿
The downside of being part of the Rally is that with all of us in town at once the businesses and “fixers” make hay while the sun shines and all the prices go up. Talking to some of the locals we were able to get an idea of the differences. A car and driver for the day more than doubles to $50. Funny thing is it seems if you’re Australian it’s $50Aus, American it’s $50US, New Zealander it’s $50 Kiwi, so on that basis us Aussies are, for the first time in decades, the losers in the currency wars. Diesel that sells locally at 4,500 rupiah (50c Aus)per litre is suddenly 7,500 for the visiting yachts. Even the Bintangs have been hiked to 30,000 rupiah ($3.20Aus) for a 750ml bottle at the bar. With a main meal at the beach bar costing us a whopping 25,000 rupiah $2.65Aus – Oh woe is us.


Karen celebrated her birthday on the 28th so we marked the occasion by hiring a car and driver and toured around the region. Highlights included a visit to a village where the people earn their meagre living by extracting palm sugar from high up in the trees twice a day and boiling it up to produce a very sweet brown toffee like product they sell at the markets. We then went to see traditional musical instruments being made and played. Consisting of musical strings of different tuned length arranged around a round piece of wood with a shell like fan of dried sugar palm leaves to amplify the sound, these unique instruments produce an incredible volume of very melodious sound. We were even treated to a rendition of Waltzing Matilda by the musicians. At just $3 to purchase a small example we were very tempted but stuck to our guns of not buying “stuff” because we need to travel as light as possible.

A trip to the regional museum was particularly underwhelming. It was very, very run down and a great example of how many things in Indonesia are often established very well but then receive no upkeep thereafter. We escaped from there pretty quickly and headed to the mountains for a refreshing swim at an incredible series of waterfalls. Standing under the cascading water of the largest fall was absolutely fantastic after many days of very quick splash and dash showers to conserve water on board. Karen was very difficult to extract from the water but eventually emerged prune like but happy. 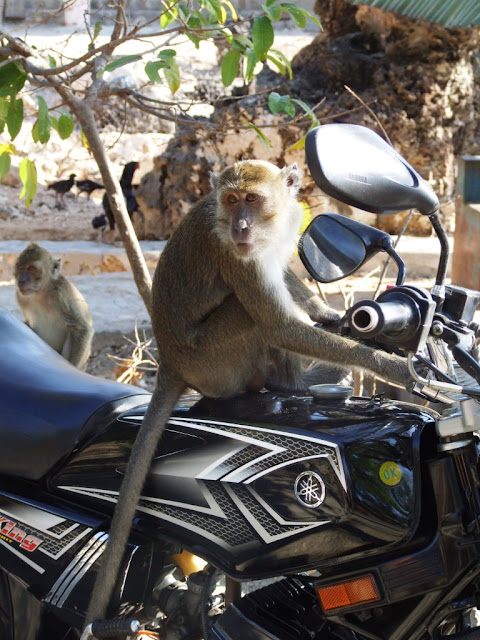 The way back to the harbour was a drive along the sea front road with a stop at an area of caves inhabited by hundreds of monkeys. As soon as we pulled up on the side of the road they swarmed down from the trees and rocks looking for a free feed of peanuts. In other places we have visited such as the monkey forest in Bali, the monkeys have been quite aggressive in the pursuit of a handout, climbing all over you and fighting each other. These we were very polite monkeys who waited to be offered food and would happily take it from your hand. Combined with the playfulness of the young ones, this made it a very, very enjoyable monkey experience.

That night we lashed out for a slap up dinner, $6 meals instead of $2 ones, and Bintangs again at the beach bar so by the time Karen collapsed in our bunk back on the boat she’d enjoyed a particularly memorable birthday.


With over 70 boats at anchor in the bay, the beach area in the centre of town is a hive of activity with dingys coming and going all day and night. For the locals it’s the perfect opportunity for commerce. First there’s the valet parking. When you arrive in at the beach, a group of likely lads descend on your dingy, hold it while you alight and then physically lift the thing shoulder high and walk it up the beach. In exchange for 35,000 rupiah (a bit under $4.00Aus) you’re handed a ticket which covers you for as many coming and goings as you like that day. When you want to go back out to your boat they simply relaunch the dingy and give you a shove on your way. If you have brought your rubbish ashore they take that off you as part of the service. We’re not too sure about their disposal arrangements though because we’re sure we’ve seen some of our refuse float back past the boat next morning. The boat boys can even arrange to have your laundry done, $15 for a large bag washed, pressed and returned to the beach for collection. If you want a taxi, hire motorcycle, tour, buy beer or just about anything else, there’s people on the beach competing for your business, all at inflated prices of course.

Local public transport is provided by thousands of mini van Bemos with bench seats in the back arranged along the sides instead of across so more people fit. Every Bemo seems to have its own musical horn tune, used almost continuously, and is brightly decorated with huge stickers and signs, many of which keep us shaking our heads in disbelief. You’ll have the “ Jesus is Master” Bemo decorated in a last supper theme driving down the road followed closely by the “Love Sucks – Sex is Good” Bemo plastered with Playboy stickers and images of half naked girls. They certainly provide constant entertainment while walking the streets.

Friday night saw the first of two official welcome dinners for the Rally participants. Held open air by the beach, this one was hosted by the Governor, who was obviously a busy man and didn’t actually turn up but had his official speech read by a local tourism official. Read first in Indonesian it went for what seemed like twenty minutes. The MC then read it in English which lasted all of three so we feel something may have been lost in translation somewhere. Speeches were followed by some traditional Timorese dancing which is very different to other parts of Indonesia we’ve been to. Once again the local food provided was very, very good but the biggest surprise was the after dinner entertainment. First off, the absolutely beautiful lead female dancer in full traditional dress walked up to the microphone and started belting out western rock and roll numbers. When she took a break she was replaced by a lovely girl in Muslim headscarf who launched into pop and country rock songs. If there was ever a case of the image reaching the eyes not matching up with the sound in the ears this entertainment program was it. By the time the beach bar owner joined in the vocals with a Beatles melody the place was really rocking on with the cruisers up and partying big time with the locals.

Having survived the Governor’s welcome dinner we then backed up the following night for the Mayor’s welcome dinner. Like the Governor, he is obviously also a very busy man and didn’t actually turn up either. However all us yachties gladly devoured the free feed he so generously provided on behalf of the city and were again treated to an eclectic program of entertainment.

Sunday was spent topping up the boat’s fruit and vegetable provisions from the local market, picking up our laundry from the beach boys, haggling with the local money changer about the exchange rate and generally getting ready to go back to sea tomorrow. That evening, we attended Trish's (Brittish cruiser from the yacht Curious) birthday party held on Further( one of the very few motor boats on the rally) and then in the morning headed for our next stop on Alore Island off the eastern end of Flores.