The Lines are cast off 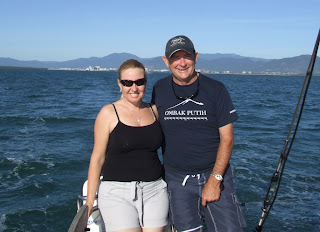 23 June 2011
The journey proper has begun. We threw off the lines from Marlin Marina in Cairns at 8.30 yesterday morning and took Nae Hassle out through the leads of Trinity Inlet headed for Lizard Island. The wind was a very gentle 10 to 15 knots from the South South West for most of the morning however the forecast had things strengthening to 20 to 25 later in the day.
The first order of business was to rig and deploy the mackerel rig we bought in Cairns. One evening in the Marina well into sundowners, Karen had assured the rest of the crew they would be well provided for with plenty of fish on the voyage and it only took 20 minutes for them to start reminding us of our boast and ask for some results. The standing joke became “Any fish yet? Asked by one of the trio at least three or four times an hour. 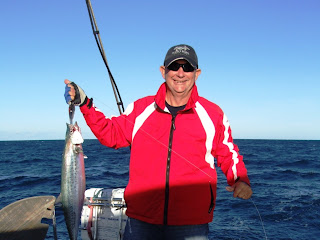 We enjoyed a steady sail north as I took the first three hour watch overseen by Colin and Milin with Karen taking over for the Noon to 3pm shift. The strengthening wind pushed us nicely on towards Low Isle at around six and a half knots under reefed main and no headsail. Shortly after Karen was relieved at the helm by Marc I spotted a strike on our lure trolling behind the boat and pulled in a very nice spotted mackerel which Karen quickly converted into mackerel steaks all nicely bagged and away for tomorrow’s dinner. And so ended the ribbing from Colin, Milin and Marc about the fish supplies.
The passage from Cairns is about 145 nautical miles so our departure had been timed to provide an arrival shortly after sun up. Karen, Mark and I rotated through 3 hour watches through the night while Colin and Milin alternated being with us as we learned the ropes. There was plenty of large commercial shipping about along with trawlers working near the coast so we were kept on our toes. The wind began to pick up in earnest during my 6-9 stint and by the time I handed over to Karen it was blowing a steady 20 knot south easterly. Karen saw this strengthen to 25 to 30 knots during her watch where it has stayed ever since.
Nae Hassle is a sturdy 57 footer and with reefed main alone produced a very handy 7.5 to 8.5 knots through the night and handled the moderate seas very confidently. However being on the stern quarter made things very rollie and not the most comfortable. I had my first experience of sleeping in a bunk with a lee cloth rigged to stop you from falling out of bed onto the deck. Very different to our four poster at home I must say. 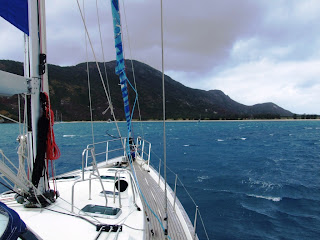 On cue we duely arrived at Lizard Island just after dawn and were anchored up by 8.20am giving us a passage time of just ten minutes over the 23 hour mark for the 144.6 nautical mile journey.
The rest of the day was spent catching up on sleep, tidying the boat up and, finally, devouring our mackerel steaks for dinner, beautifully done by Karen with a mint salsa.
The theory was to head on to Flinders Island tomorrow but the wind has continued to blow with gusts over 30 and never dropping under 20knots. The forecast is also not that encouraging with these winds predicted to last for days. In Cairns we found a few strands of stainless wire unravelling in the forestay which is never a good thing. Unfortunately replacement stainless cable was not available locally so Colin elected to order a new forestay for delivery to Darwin and we have sailed with two spare halyards moved forward to help backup the weakened forestay. Seeing this is what keeps the mast up we're not too keen to head out in gusts of 30+ wind at the moment.
24 June 2011
I was lucky enough to visit Lizard Island over twenty years ago and have always told Karen I wanted to bring her here one day as I consider it one of the most amazing places in Australia. I often spoke of snorkelling in the crystal clear waters rich in brightly coloured soft and hard corals teeming with more fish life than I have seen anywhere on earth. The many bays feature golden sand beaches rather than crushed coral and the tallest point on the island is the very spot Captain James Cook climbed to survey a path out through the reefs that had so nearly claimed his Endeavour. The islands history also includes the tragic story of Mrs Watson who fled her stone cottage with her infant when attacked by aboriginals from the mainland while her husband was away collecting sea cucumbers. She successfully escaped to sea during the night using a large cooking vat as a boat only to perish from thirst on a nearby islet.
We are currently anchored in Watson’s Bay near the ruins of Mrs Watsons cottage and unfortunately the island is not living up to the glowing image I had conveyed to Karen as the wind has continued to blow 25 to 30 knots with grey skies and passing showers since we arrived. We are boat bound as in these winds we wouldn’t dare launch our Avon inflatable dingy of the stern deck. I’m sure if we tried it would be us that would be launched, parasail style. 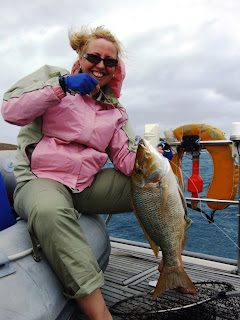 So there’s been plenty of time to read, chat and just to prove our fishing was no fluke, Karen and I decided to try our luck with a bit of bottom fishing off the swim platform at the stern. Ten minutes later Karen had landed a beautiful big sweetlip for tonight’s dinner. The funny thing is that our fridge and freezer are full to the brim with provisions to last us to Darwin. As a result we can only catch what we can eat because there’s no room to put it anywhere. The skipper is now joking that if we keep this up the meat we bought will still be in the freezer when we get to Singapore. As he’s a Scotsman this is very appealing to his sense of thrift.