We negotiated the narrow channels to exit Pancake Creek in the pre-dawn light by closely following our own GPS track. If we didn’t run aground coming in we were not likely to hit bottom going out exactly the same way.


The full moon was yet to set in the West as the sun made an appearance over the opposite horizon as we cleared the rocks of Clews Point and pointed our bow North East. Our destination was an anchorage inside a coral lagoon at Fitzroy Reef, 35 Nautical Miles off the coast. 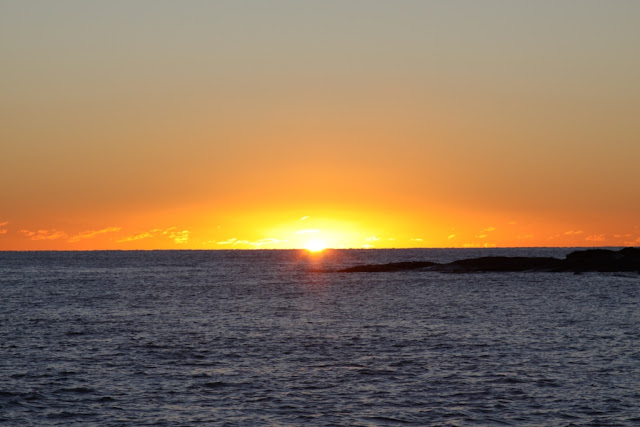 Once we were well clear of the hazardous rocks that stretch seaward from Bustard Head we silenced the motor and let our sails push us along at a comfortable five and a half to six knots. The ten knot wind was square on the beam while the swell was reasonably mild and the sun was shining. What more could anyone ask?


It was a very pleasant sail through the morning only interrupted by a mackerel-tuna having a bite at our lure and reluctantly coming aboard. These fish actually taste awful but as we were out of bait for our crab pots, Karen sliced and diced it into freezer bags for just that purpose.


About an hour and a half before reaching Fitzroy Reef we received a radio call from Gary and Anne on the catamaran Chances. They were a few miles behind us also on their way to the reef and were now asking if we’d been through the narrow entrance in the coral that must be negotiated to enter the lagoon. We explained we had never been here before but had downloaded Google Earth imagery and overlaid it on our charts and were planning on entering using these for additional guidance. They then asked if we could slow to let them catch up and follow us in.


It was a simple request to agree to. If we had it right why not let them follow the leader. If we got it wrong at least there would be another boat standing by to help. We furled away the headsail and bobbed along while they closed the distance from behind.


The entrance to the lagoon is very narrow and curves through the very menacing coral coming up near vertical and protruding above water level except at high tide.  We timed our arrival for just after midday so the sun would be high in the sky providing the clearest view of the coral below the water. We didn’t mind entering a little later as that would put us closer to the low tide slack water and reduce the amount of current that can race in and out of the narrow gap.


Just after 13.00 hours Karen positioned herself on the bow for our passage through. With one of our small radios she was able to communicate exactly what she was seeing directly back to Rob on the helm as he followed the electronic chart. Once the boat was actually into the entrance itself the coral walls lining the edges were very clearly visible in the sunlight making steering through a lot easier. We imagine an overcast day would be much more nerve wracking.


With Chances following closely astern we cleared our way through never seeing less than six metres on the depth gauge and entered the expansive lagoon’s totally calm waters. Right on cue, what remained of the morning’s breeze dropped out to leave dead still air. We edged our way around a couple of bombies (coral outcrops that rise from the seabed) into a wide, clear area of sand in seven metres of water and dropped our anchor.  The water was so clear, we could see every link of the chain laying on the lagoon floor. This place was simply amazing.


No sooner had we zipped up the sail covers and tidied up the boat than another yacht arrived at the lagoon entrance. It was friends we’d made last year in Bundaberg Marina on their boat Sea Whiskers from Eden on the NSW South Coast.  While sailing over from Pancake Creek we had spotted Chris and Sally on our AIS heading north from Lady Musgrave Island and guessed they may also be planning on spending the night at Fitzroy and were delighted to see them motoring over to anchor beside us. It’s always great to catch up with cruising buddies. They are on their way North again and we were very pleasantly surprised to learn they too are bound for the Louisiade Islands.

By now the water inside the lagoon had totally glassed out and in very short order each boat’s crew was heading off to different areas of the reef in their dinghy to snorkel. Sadly much of the coral was suffering from the bleaching that huge areas of the Great Barrier Reef is experiencing that has been very widely reported in the media. However the fish life was abundant and we were still able to find colourful examples of different corals dotted along the reef section we snorkelled.


We came up with so many great photos it was difficult to choose what to include here in the blog. 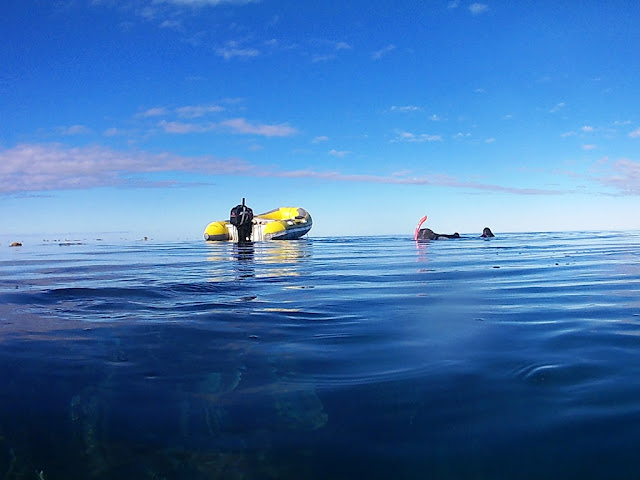 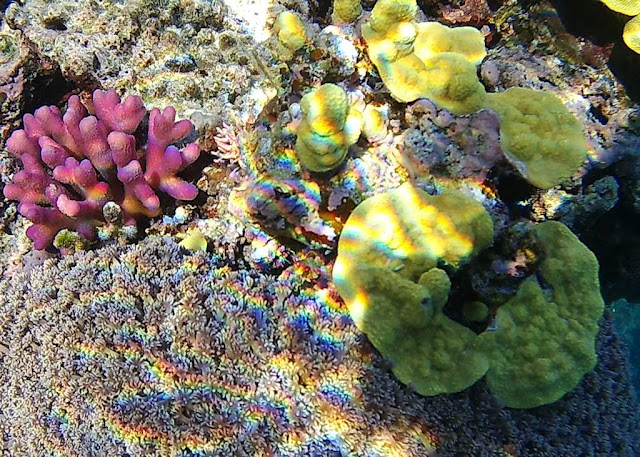 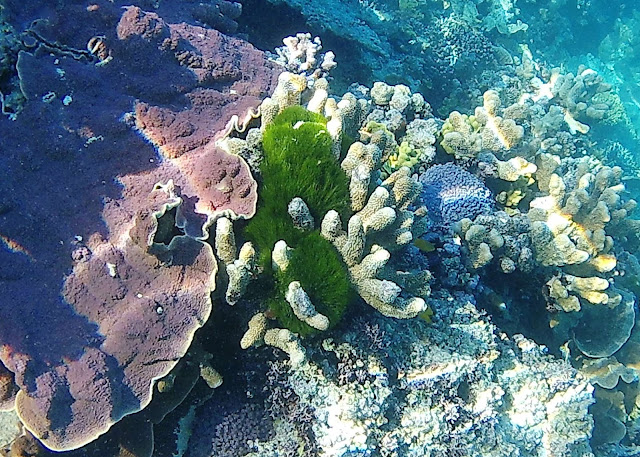 Please ignore the date on the video. We haven't worked out how to set it on the new camera yet. Technology is wonderful.

That evening we experienced one of THE most amazing sunsets we have ever seen. It seemed to last for an hour with the sky altering its spectacular display constantly.

Once the sun’s glow disappeared completely, the clear but moonless sky turned ink black apart from the billions of stars glimmering above. The still water inside the lagoon was so glassy that the heavenly constellations were perfectly reflected on its surface. We had extinguished all lights below decks and now even turned off our anchor light for a short time to take in nature’s incredible treat. It became impossible to discern an horizon as the universe above merged with its reflection below. In every direction we looked, the star filled sky appeared to reach from high all the way to the waterline of our ketch. It was as if we were floating in a star filled sphere. We were in such awe we could only speak in whispers for fear of disturbing the moment. It was one of the most incredible experiences we had ever shared in our lives.

This all changed in the early evening when a bright red globe arose slowly from the Pacific Ocean before gaining height and taking on its normal white hues. What a night to be treated with a full moon. Unfortunately it was all impossible to photograph from a floating boat.


Australia’s Great Barrier Reef is an incredible gift of nature that we are looking forward to seeing a lot more off. 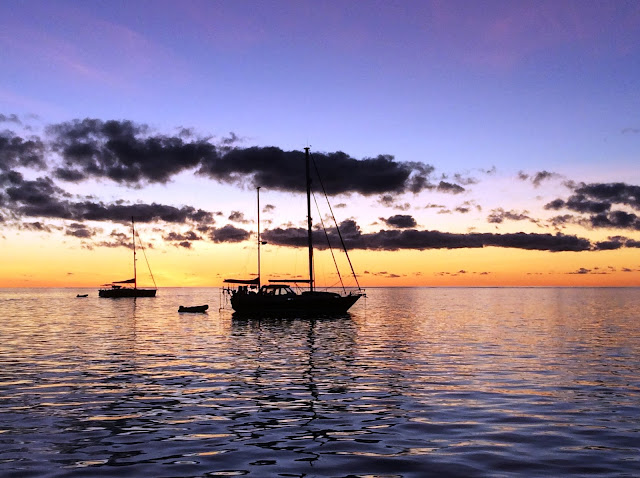