Fraser Island to Bundaberg & into the Boatyard

The weather forecast for Sunday indicated a reasonable chance of being able to sail from Fraser Island across Hervey Bay to the Burnett River where we were booked into the boatyard at the Port of Bundaberg Marina. We’ve been very impressed with both the marina and trades services available here on past visits so had decided this was the place to clean Our Dreamtime’s backside and get a few other small jobs done.

With over sixty nautical miles to travel in the day, we were up and away just as the pre-dawn light began to appear over the hills of Fraser. We motored north along the island’s west coast in dead calm conditions with mist wafting across the boat. As beautiful as it was, we really hoped the predicted South Westerly breeze would appear with the sun or soon after.

Unfortunately we didn’t find any useful wind until we exited the channel north of Big Woody Island and were finally able to sail. From there our run across the bay proved very relaxed and uneventful. Rather than make straight for the leads marking the channel for entry into the Burnett River we elected to steer closer inshore and run along the coast past Bargarra and the beautiful Mon Repos beach. We anchored in the river just before 16.00.


The following morning we moved into the marina on an inside berth adjacent to the fuel dock which proved very convenient as we were able to top up our fuel and water tanks without moving from our pen. Then it was a busy time making final arrangements with the boatyard to be lifted out first thing in the morning near the slack tide, confirming with tradesman what tasks we required them to do and making a shopping trip to the chandlery to make sure we had everything required for the jobs we were doing ourselves.

Early that evening the boatyard manager called and asked if we would mind being the second lift for the day as a trawler had come in that was taking on water and they really wanted to get it out as soon as possible.  Of course we readily agreed thinking an hour’s delay wouldn’t be a problem for us.

Unfortunately getting the trawler out, pressure washed and chocked proved a bigger issue than we thought and it was after lunch before we got the call to head for the travel lift. Here’s where Rob puts his hand up and says he seriously cocked up.  Our Dreamtime has a full length keel giving her reversing characteristics akin to a rudderless barge in a gale. We’d originally planned to be manoeuvring out of our pen and into the travel lift slings near slack tide early in the morning before the wind got up.

Now many hours later, I totally underestimated the force of the incoming tidal current when combined with the moderate breeze blowing and before we knew it the stern of the boat was forced back hard on a pylon. Our dinghy hanging in its davits acted as a huge fender but before we could power off we heard a very loud ‘Pop’ like a bursting balloon and instantly knew no good could come of this. We then made it successfully into the slings and were lifted out with a very sad looking RIB drooping off the stern. BUGGER!!!
The boys from R&B Marine were at the boat as soon as she was secured in her cradle getting organised to tackle their jobs of applying Propspeed to our prop and repacking the rudder stock stuffing box which had a slow weep.

Meanwhile, we spent the next two days anti-fouling and polishing the hull, freeing up a seized seacock and working on resurrecting our dinghy. We have a distinct soft spot for our Yellow Sweetlip after giving her a complete makeover last year. See the story at Breathing new life into our sagging dinghy. The thought of having to give her last rights and buy a new one saddened us and also had our bank account quaking in fear.

We can report that after three goes at patching and sealing her up – the jury is still out. She split seams against the metal hull which are proving troublesome to fix. We think we get her airtight only for her to start weezing again. She is usable but the air pump is now called ‘Amex’ because we never leave home without it. Time will tell whether the patient makes a full recovery before we need to head offshore or succumbs to her grievous injuries.

Despite the late start on Tuesday, we had all our work completed by Thursday lunchtime. Our Dreamtime looked absolutely fantastic and well ready for her travels ahead. We had planned to put her back in the water on Friday before leaving her for ten days while we made a quick trip back to Ipswich to surprise Karen’s mother at her 70th birthday party and for Rob to head up the commentary team at one of Australia’s biggest motor racing events, the Winternationals at Willowbank Raceway
.
One look at the weather forecast predicting a major East Coast Low in the coming days convinced us to leave the boat secure in her cradle on the hard, In the last few years, the Burnett River has experienced two major floods with scores of boats lost so we were taking no chances.

(As it turned out, Bundaberg was to be spared all but a small part of the bad weather which was concentrated further south bringing heavy rains and monstrous seas which destroyed marinas in Coffs Harbour and Sydney along with seeing a number of boats lost or driven aground.)

We made good use of the marina’s free shuttle bus service which dropped us right to the Bundaberg station for our Friday train ride down to Ipswich. At around seven hours, the trip was long but quite enjoyable watching the Australian bush slide by from the Club Car as we enjoyed a wine or two. It's actually a very civilised way to travel.

We stayed with our daughter Yasmin, her husband Rob and our youngest grandkids, Lyla and Harry who it’s safe to say were quite happy to have Nanny and Poppy drop in for a few days. Walking in unannounced to Karen’s mum’s party worked at treat with Joy tearing up on the spot thrilled that her little girl had come to celebrate her big Seven Oh. It was also great to catch up with a lot of family and friends again.

Karen enjoyed a lot of Nanny duty into the following week while Rob packed five days of long hours and solid work at the Raceway but couldn’t have been happier being back in his high horsepower element.

In some ways it seemed all too soon that we were boarding the train for our return trip to Bundaberg  as we were going to miss our family but we were also itching to get back on the boat and underway North. Once again the rail trip was effortless, well, other than lugging 55 kgs of extra clothing donations for the Louisiade Islanders we were given while in Ipswich. Lucky we weren't flying. The excess luggage bill would be scary.

We relaunched early on Wednesday morning, thankfully without and dramas this time. We then spent the day cleaning the normal boatyard grime off the decks, tidying everything away and making a shopping trip to the local supermarket stock up on fresh fruit and vegies.

We celebrated that night with one of the awesome seafood platters the Marina provides free to SICYC members (Shaggers) who stay a week. How good is that deal? (If you're not staying that long Shaggers do get 10% discount on the nightly berth rate.) 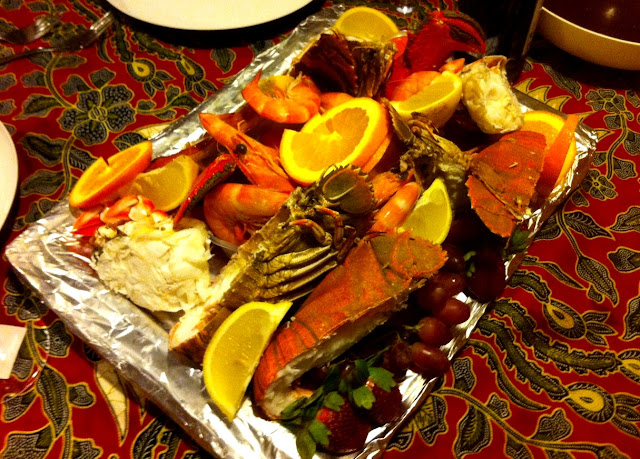 Then it was early to bed before another pre-dawn start to be on our way to Pancake Creek, the next step on our journey to Papua New Guinea's Louisiade Archipelago.