Who to believe when the charts and pilot guides don't agree.


Rising to the alarm before dawn is not easy sometimes and getting the Our Dreamtime crew up and operational this particular morning after a very social evening was a challenge. We’d had a late night in the Percy Hilton with other cruisers enjoying wild goat stew and the odd bottle of red wine so no one was keen to leave their bunk but we had a fifty nautical mile passage to Island Head Creek ahead of us.


Once we’d all downed a good, strong coffee our productivity improved dramatically and we soon had the boat prepped  for sea and the anchor up. We slipped out of Middle Percy Island’s West Bay as the eastern sky began to lighten. Breakfast was despatched underway and we had left the island well astern even before the sun appeared over the horizon.


We’d raised the main and mizzen sails in anticipation of a predicted gentle north easterly breeze but relied on the engine for propulsion for the first couple hours of the trip. As the breeze began to fill in a little we were able to get our asymmetric spinnaker up and flying. It’s always a great feeling when the motor is turned off and we’re able to ghost along downwind in near silence.


The new friends we’d met over goat stew the night before, David and Nerida from the catamaran Seabreeze and Rick on Howzat had weighed anchor soon after we had so it was nice to have some company around us. With the benefit of a huge screecher, Howzat had no trouble overtaking us once our engine went off and disappeared into the distance but we were able to keep Seabreeze to our stern right through the long day. You know the story, two boats or more in sight means there is a race on, particularly on a light winds days when nothing much else is happening to keep you occupied. 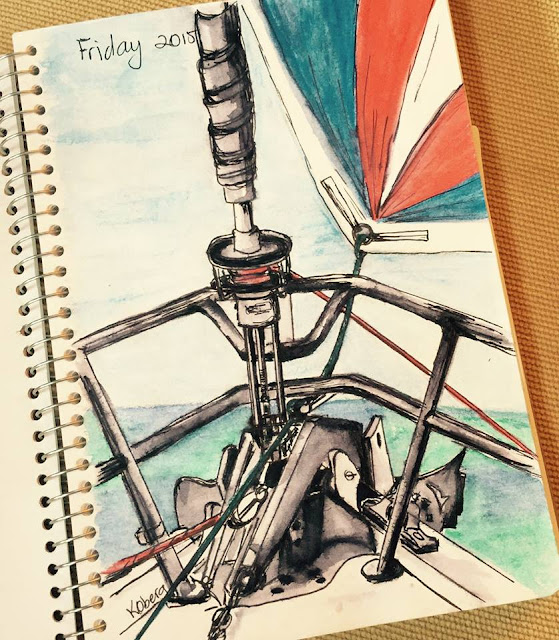 The wind did strengthen into the low teens in the afternoon seeing us get up over seven knots for a while but overall it was a fairly uneventful trip until we approached the mouth of Island Head Creek. The tidal run around the point here causes quite confused seas and we found waves standing up steeply despite the moderate winds. This made the time spent on the foredeck dropping the spinnaker in its snuffer and getting it stowed away a little more lively an exercise than normal. The mizzen was also dropped and main furled away before we motored in towards the river mouth.


Both pilot guide books* we had on board indicated there was a wide shallow bank mid stream in the creek mouth with narrow channels each side. Both recommended steering very close to the rocky cliffs on the north side. In direct contrast, our Navionics chart showed the deepest water smack bang in the middle. It was near low tide so we were a bit worried about which may or may not be correct. To further confuse the issue, the Navionics was also showing a set of cruiser contributed waypoints for entry that seemed to align with what the pilot guides suggested rather than the contours shown on the electronic chart.  After some discussion, we decided to go with the pilot guide advice and hugged the northern shore. We found ourselves in a narrow channel with over 15 metres of water under us which eased our nerves about the steep cliffs only metres off our starboard side.


As we cleared the rocks and had nothing but sand around us we began to relax - until the bottom shelved almost instantly. Rob threw the wheel hard over to port, hit reverse and slowed the boat down to a couple of knots as the depth gauge dipped to 1.8 metres. We have a fairly modest draft at 1.5 metres but any depths as shallow as we were now in scare the pants off us, particularly if unexpected.


Edging back towards centre stream the gauge slowly climbed to three metres,  four, then five and we began to breathe again. We proceeded very carefully well up stream to the area we’d chosen to anchor. Seeing a couple of boats, including Howzat already there made us feel a little more comfortable about our choice. However, we still found it quite shallow and eventually dropped anchor in just a bit over two metres satisfied that the evening’s incoming tide would provide a more comfortable depth.

This part of the coast was ground zero when extreme Cyclone Marcia made landfall early this year as evidenced by the many trees still with only a thin amount of foliage showing. The area also experienced massive flooding so we can only assume that the creek mouth may have experienced some silting with banks and channels moving since last charted. David and Nerida on Seabreeze entered the creek shortly after us and, after facing the same dilemma as we did, elected to take the Navionics option and steer their Lagoon Catamaran straight down the middle. They reported depths of over three metres most of the way but also crossed a very shallow sandbar just when they thought they were through and safe.


Whatever, we would recommend using extreme caution to anyone navigating  the Island Head Creek mouth, particularly if entering or exiting anytime other than on the high tide.


Our post passage beers tasted extremely good once all was secured and we could truly relax. Karen was very pleased to free up some more room in our backup fridge by producing another awesome meal from our declining stocks of Wahoo which we enjoyed on the stern as the sun set.


It was a very peaceful night on the hook well protected from all directions. We slept soundly in the knowledge that the tide would be a little higher when we left in the morning and if we followed our own track back out through the creek mouth we would have enough water to be safe all the way.

*The pilot guides we had on board were Alan Lucas' Cruising the Coral Coast and Noel Patrick's Curtis Coast.