With the wind predicted to hold from the North East for the next few days we were keen to keep moving South but there was one stop we were not going to bypass, the boatie Mecca of Middle Percy Island. In the conditions, we could have sailed much further than the 20 nautical miles it lay from our overnight anchorage at Digby Island but, having sailed straight by on the way North, it was a must do visit for us now.


West Bay at Middle Percy Island has long been a popular stopover for sailors heading up and down the Queensland coast, largely because upon obtaining the lease to the island in 1964, Englishman Andy Martin, welcomed yachties with open arms, offering fresh produce like honey, fruit, vegetables and goat meat for sale or in exchange for help on the island.


Karen first visited Middle Percy on her parents game fishing boat ‘Wahoo’ on their way north in the late 1970s and was fortunate enough to spend time with Andy. In those days there were far fewer boats travelling the coast. It’s a far cry from the hundreds if not thousands of boats that now make their way up and down Queensland each winter. During the time they stayed in West Bay only one other boat came in, a family circumnavigating on a small yacht. Karen has fond memories of playing with the children off that boat and Andy’s kindness to them all.


In one article the online cruising publication, The Coastal Passage, said of Andy, The "A frame" started construction around 1979/80. ….. With help from a variety of sources, the beach at West Bay became a welcoming wonderland for visiting boaty's, and an outlet for the produce of the island. Andy produced honey, excellent jams, bread, homebrew mead and beer and welcomed visitors to the homestead for meals at modest cost. In these areas, he excelled. Andy was at his best when it came to management of the natural resources of the island and producing food from them.


As the years went on, more boats were making their way along the coast at the same time that other island agricultural leases were being relinquished and often replaced with resorts that were not always friendly to passing boaties. The legend then of Middle Percy was firmly established, and for good reason. It took the strange combination of an eccentric (Andy hated the term applied to him but…..) Englishman, an island paradise and a regular fleet of passing boats to make it all happen. It could be concluded that the whole thing was less an act of altruism, than a flawed attempt at commerce…… But who cares about that. It's the result that matters. In the end, in spite of, or because of Andy's unusual nature and his circumstances, he is remembered with fondness by most. He was complex and flawed and certainly, remembered.

In recent times the island has been subject to a great deal of controversy and a protracted legal battle after the elderly and ailing Andy was conned out of his lease for just $10 before he passed away. The island's facilities were left to deteriorate, animals died, and yachties were no longer welcome. Thankfully in 2008 courts awarded the island back to the family of the original leaseholder. His cousin, Cathryn, has returned the island to its former glory as a wonderful, welcoming place for sailors to meet, socialise and enjoy their own little slice of paradise. 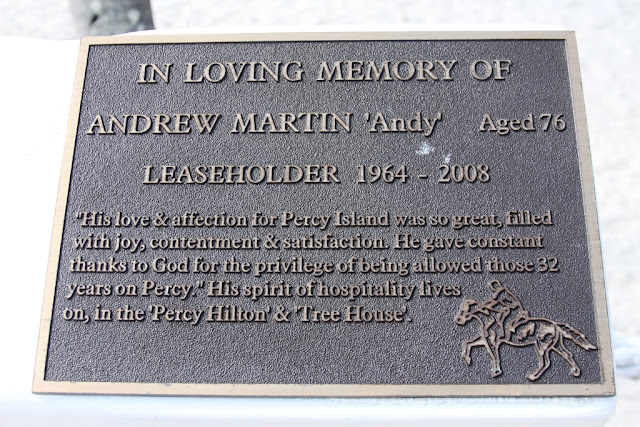 There’s a great article about the island, Andy Martin and what went on available here,  http://www.smh.com.au/national/the-possibility-of-an-island-20121218-2bl9b.html

We enjoyed a straight forward sail across to Middle Percy and, like our experience at Digby Island, we found the much maligned anchorage in West Bay flat as a tack and unbelievably beautiful. The bay is lined by a pristine, white sand beach backed with coconut palms and presents as the idyllic island paradise. At the north end is a narrow entrance into a lagoon which is navigable at high tide but as the whole lagoon dries at low it is only useful to catamarans or monohulls that can be careened against the small jetty.


We anchored in clear sand making sure we had ample water under us to allow for the seven metre (20ft+) tidal range. After a couple of traditional post passage beers and lunch of homemade pizzas baked in the bbq’ very little time was  spared before we were treading squeakily across the fine sand to explore some of the many wonders of Middle Percy Island.


The centre piece of West Bay for cruisers is now the A-Frame structure dubbed the Percy Hilton which has become both a shrine and social hub for sailors. The now well established tradition of leaving behind some memento of your boat’s visit to the island has led to the structure being decorated in the most unimaginable, eclectic range of memorabilia. 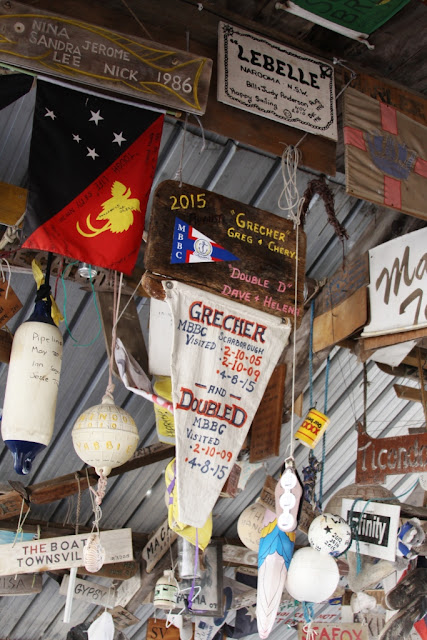 We spent a considerable amount of time examining the various treasures left by cruisers to mark their passing by and delighted in discovering the mementos of boats we knew. We also met other cruisers off the two catamarans in the bay, Seabreeze and Howzat. While we were chatting one of the local residents, Ernst, arrived down from the homestead and welcomed us to the island. He also invited us all to return to shore that evening for a meal of Middle Percy’s well renowned specialty, goat stew. Understandably this was universally accepted with great enthusiasm.

We spent the rest of the afternoon wandering further afield. The A-Frame hadn’t existed when Karen last walked this beach. Instead the focal point of Andy’s hospitality back then had been a small shed further up the beach which she was delighted to find still standing. It too still housed mementos from visiting boats but of much older vintage than the newer and grander Percy Hilton. 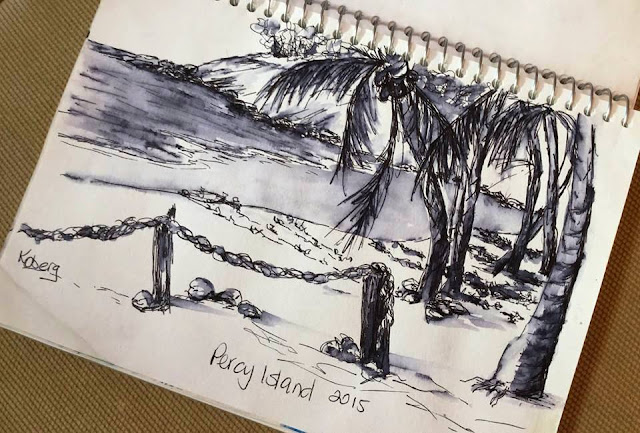 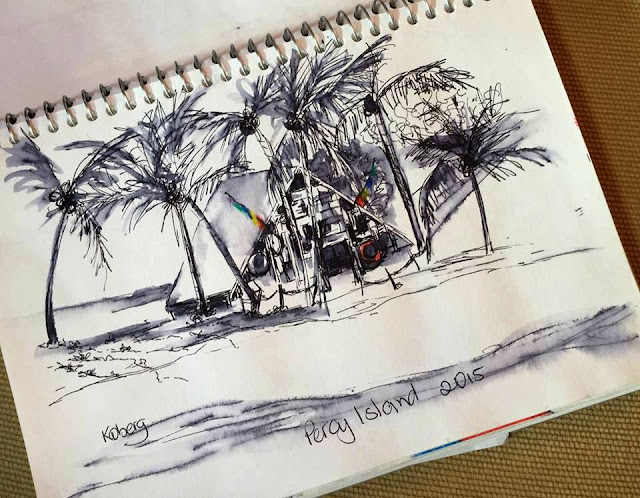 When we returned ashore after dressing for dinner, ie: getting out of our wet swimmers and changing our t-shirts, Ernst had a good fire burning down to coals in the firepit behind the Percy Hilton. A good sized, cast iron pot hung above ready and waiting. To supplement the generous provision of the goat meat, all the cruisers supplied a range of vegetables for the stew which Ernst cooked with red wine. Some of it even went in the stew. After much communal chopping and dicing, all the ingredients went into the pot which was stirred with great regularity.


Amongst the distraction of vigorous conversation, Ernst suddenly realised he’d forgotten one essential ingredient of the recipe. He quickly darted down to the beach with a short piece of rope which he tied to his ankles and used to shimmy up one of the many coconut palms.  With a healthy amount of coconut milk added to the pot sundowner drinks and conversation were duly recommenced.


Being a very citified Londoner, Marc was revelling in this form of ‘having people over for dinner’ that was so far removed from his normal world. ‘Chaps, if I invite someone for dinner a trip to the supermarket for produce may be required before I place it in the oven, here it involves killing a goat, chopping wood, lighting a fire and climbing palm trees for ingredients.’ It may have been in that this point of his OZ adventure was akin to Dorothy discovering she was no longer in Kansas.


The goat stew served was incredibly rich in flavour, the meat tender and the meal extremely filling, all in all earning a Gold Star rating.  Thank you Ernst. Your hospitality was outstanding. We can only imagine how many London dinner conversations Marc will be able to star in regaling the time he ate a wild animal cooked over an open fire under the stars and a full moon on a tropical island in the Coral Sea. It’s a story worth telling.


We are so pleased we did not sail on past Middle Percy Island this time. We can see how the anchorage in West Bay could get rolly in the wrong weather but our experience there was nothing short of superb. We will be back.