Exploring Vibo and Pizzo - Our last stop on mainlaind Italy

After the previous days rubbish weather, we were so happy for a resumption of the brilliant, summer conditions we had grown accustomed to when we stepped off the boat to do a bit of exploring.

The marina manager strongly recommended that we check out the Medieval town of Pizzo, situated high on the headland overlooking Vibo Marina. She even called a taxi for us. We were a little surprised when the ‘taxi’ proved to be a three wheeled contraption with handlebars instead of a steering wheel. Oh well, when in Pizzo do as the Pizzonians do.

﻿
Our first stop was the little Church of Piedigrotta The church dates back to the seventeenth century and is a cave dug out of a soft rock in a bank facing right out to sea. It was originally created in gratitude by shipwrecked sailors who'd been saved from a storm. The interior is ornamented with statues carved enthusiastically from the rock by a local family in the nineteenth and twentieth centuries. There is a small charge to enter and it is a little hard to decide whether the groto is a devoutly kitsch curiosity or a just a tourist trap. Still, it is definitely worth seeing if you are in Pizzo.

﻿
The centre of Pizzo is a picturesque network of narrow lanes, historic but bustling with everyday Calabrian life. The heart of the town is the Piazza della Repubblica, where we enjoyed a gelato at one of the two dozen or more gelatarias that line the square. Close to the piazza is a very picturesque castle, known as the Castello Murat. It was built in the fifteenth century but is most celebrated for being the place where Napoleon's brother-in-law, Joachim Murat, was executed. The castle is open to the public, and features a number of excellent historic displays. Below. in the shadow of the castle, is Pizzo's small harbour, with a very pleasant seaside promenade. 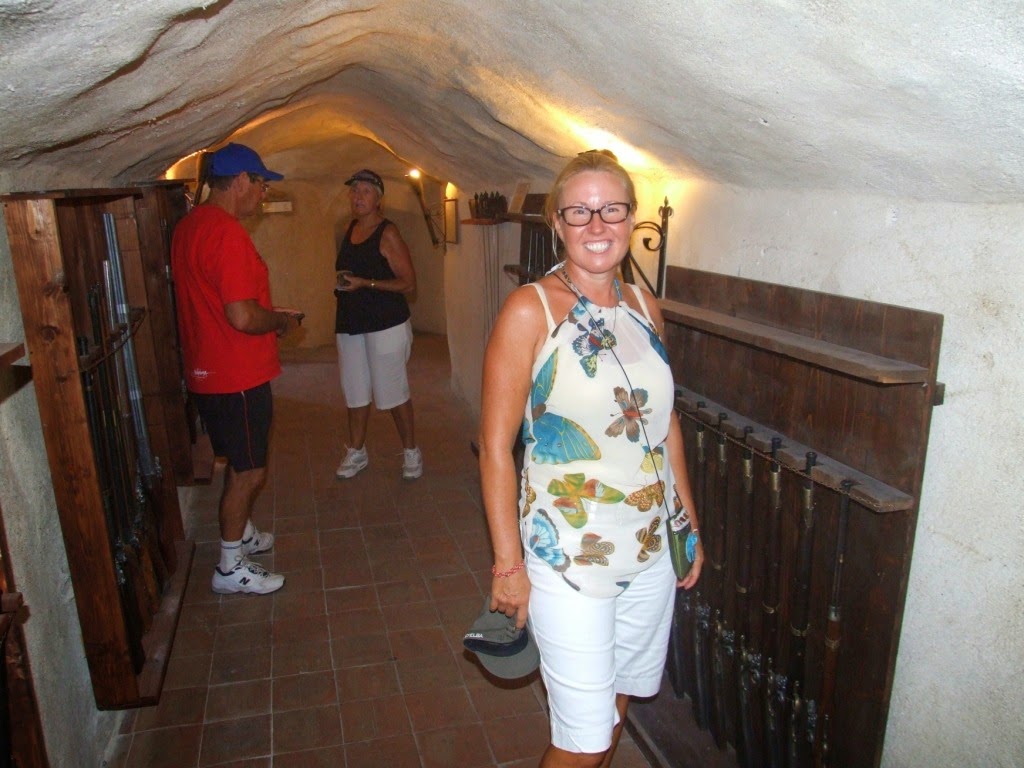 After wandering the streets we settled in at one of the open air cafes in the Piazza for a bite to eat. We have found that rather than studiously trying to decipher the menu, simply asking the waiter for a recommendation often produces far better results.  This place proved to be a prime example with the suggested Piatto di pesce (seafood plate) being amongst the best  9 Euro ($12) we’d ever spent. Complete with a mackerel steak, baby octopus, two squid, a whole fish and huge prawns, accompanied by fresh crusty bread it was a VERY filling feast and a great way to see out our day’s exploration. The fine local vino bianco (white wine) certainly contributed to the merriment.

﻿
The next morning was spent reprovisioning the boat for the next leg of our adventures. This was the last day that Karen’s parents, Trevor and Joy, would be with us, however we had great friends Tony and Lyn arriving from England that afternoon to spend some time with us on Alcheringa.

We discovered all the necessaries such as a well stocked supermarket close by the marina and loaded up on fresh fruit and vegies at a small street market. None of the vendors could speak any English and while we’ve grown reasonably adept at making our needs understood via hand signals and the VERY limited Italian vocabulary we have acquired during our three months or so in the country, Karen’s father, Trevor, hadn’t really caught on at all. On seeing a vegetable plant he was not familiar with, Trevor points to it and asks ‘What’s that called mate?’ generating a reply of ‘Quanti?’ (How many) as the trader on the other side of the bench naturally assumes we wanted to buy some.  ‘Karen what’s this quanti? Have you tried it before? Do you want any?’, Trev asks. Karen replies ‘No Dad. It’s not called quanti. He’s asking how much of it you want.’ Prompting Trevor to turn back to the vendor and ask again, ‘What is it?’. The increasingly confused Italian comes back with, ‘Mi scusi’ (Excuse me). Trevor follows up, this time asking slowly ‘ What vegetable is this?’ which only generates an even more confused look on the poor local’s face.  Trevor is not one to give up easily. Undeterred, he tries again speaking very, very slowly, ‘What   -  is  -  this  -  called?’. Rob couldn’t hold back any longer chiming in with ‘Trev, if he spoke to you very slowly in Italian would you understand him? No? Then why the hell do you think he’ll understand you, no matter how slow you speak?’ We said our ‘Scusati’ (sorry) and payed the poor bloke a few meagre Euros for our purchases and moved on before Trev tried just one more time.

Rob walked up to the station to meet Tony and Lyn after lunch and sat and waited, and waited, and waited. A text message from Tony informed him they were sitting in the stationary electric train, about fifteen kilometres away. They had been stopped for a grass fire along the tracks ahead. It was out now but they were waiting someone to turn the power back on. Another case of TII (This IS Italy)

They eventually arrived a meagre three hours late, dehydrated and starving. After dropping their bags on the boat and making the relevant introductions, we quickly decided a return to our seafood mecca we’d discovered at Pizzo’s piazza would provide a ready cure to both problems and away we went. This time the six of us were spread across two of the wondrous three wheeled chariots which proved to be the only form of Taxi available in the area. It was a fantastic afternoon/evening which continued on later than it probably should have when we returned to Alcheringa but what the hell.

Since returning to Australia at the end of last European summer’s wanderings around the Med, we have been extremely busy, catching up with friends and family, finishing and publishing our first book, ‘Stuff it. Let’s go sailing anyway’, mounting a very successful exhibition of Karen’s artwork and buying a new boat to sail the western Pacific and South East Asia.  We’re now working at finalising the story of our adventures in the Med in this blog and getting it all back to current so keep checking back for new instalments.