Don’t turn your back on the weather gods. They bite!

As much as we loved our time relaxing around Isla di Dino we dragged ourselves out of our bunks, raised anchor and continued on our way south. Down this next section of the Italian coast there are  no protected anchorages and very few harbours. We were heading for a marina at Cetraro which was listed in the pilot guide as being the last refuge for a boat of our size before our final destination on the Italian mainland at Vibo Valentia some fifty odd nautical miles further south.


It was another beautiful, sun filled day as we rounded the island and pointed our bow directly into a slight headwind. We were burning diesel instead of sailing yet again but at least it was very relaxing cruising along taking in the views of beachfront towns, hilltop villages and massive road bridges spanning the numerous ravines. 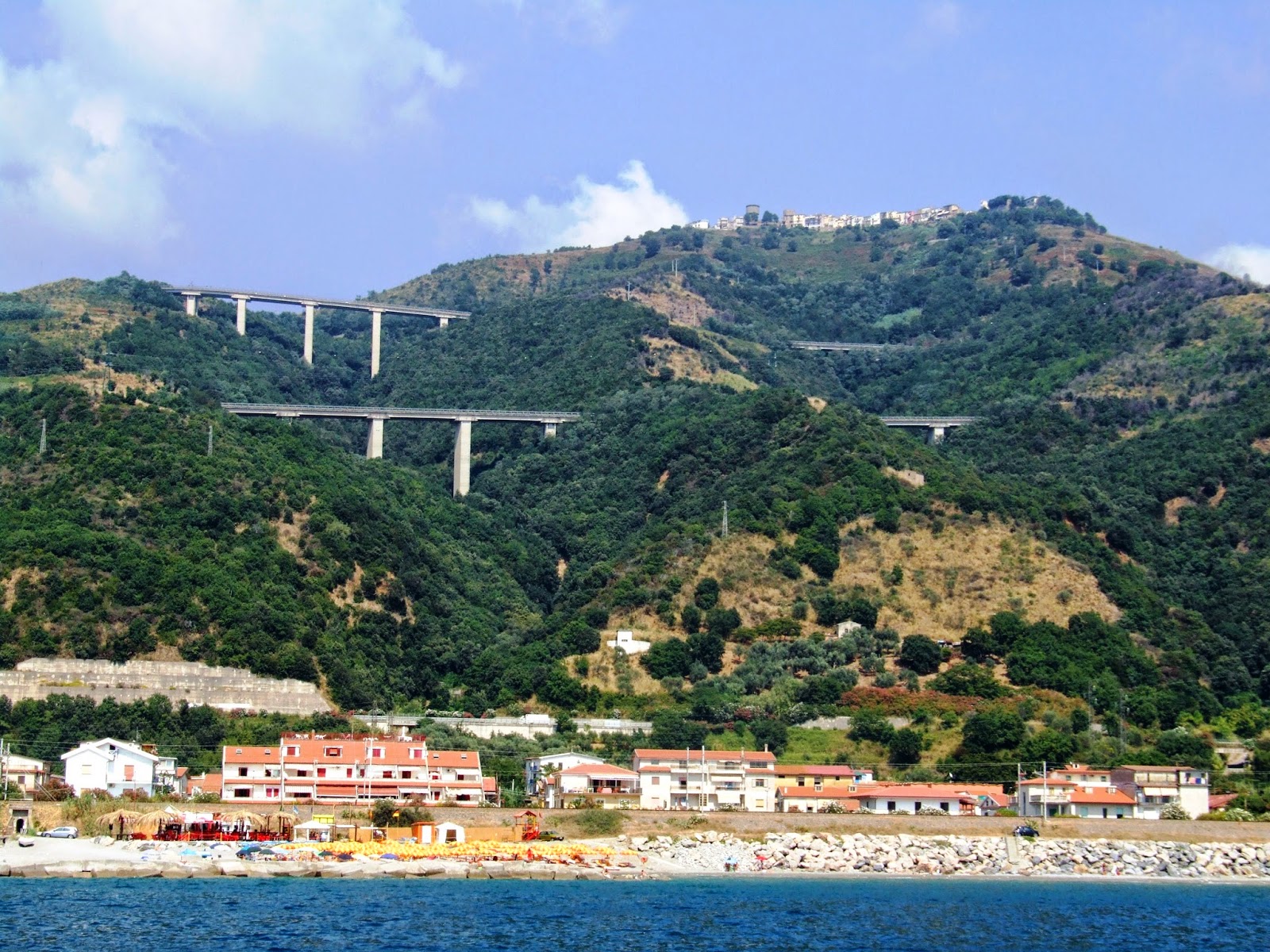 The wind strengthened a little mid morning but stayed right on the nose. We looked with serious envy at the lone yacht we passed headed north which was ghosting along nicely under spinnaker alone.


By the time we reached Cetraro around lunch time the breeze had disappeared completely. As we neared the harbour we began debating whether to go into the marina or simply anchor in the calm water outside the breakwater. As neither the appearance of the town from offshore or the brief description contained in the pilot guide proved very attractive and in light of the very benign conditions, we eventually elected to continue on southwards for a few more hours to save the expense of the marina fees and reduce the distance we would need to cover the next day. The forecast was showing that the windless weather we’d been experiencing for the past week or more was set to continue so anchoring off a beach somewhere should be no problem.


We ate a relaxed lunch on deck in the sunshine as we chugged along hugging the shoreline to get the best views of the towns dotted along the way. In the late afternoon we found ourselves off the town of Paolo which was fringed with attractive white sand beaches. This looked as good as anywhere to spend the night along this long, straight coastline so we tucked in close and dropped anchor.

We all enjoyed another swim and were settling in for sundowners when a small Gardia Costiera (Coast Guard) boat approached. We were concerned they may think we were anchored too close to the beach as the regulations in Italy seem to vary greatly from place to place. One of the young officers on board had some basic English skills and was very pleasant and courteous. After a perfunctory check of our ships papers, Rob’s ICC (skipper’s certificate) and passport he wished us a Buona Sera (Good evening) and they were on their way much to our relief. By this stage of the summer, we had seriously over stayed our Schengen Zone visas. To be honest the Italians never ever raised the issue with us and other cruisers had told us they don’t really care as long as you’re spending money in their country and don’t get into any trouble but we were always a little nervy dealing with any arm of the law. We didn't really fancy having 'DEPORTED' stamped on our passports.


We were still working on catching up on the sleep we lost at Isla di Dino and all turned in early for a nice, peaceful night . At least it was peaceful until we were woken by the sound of thunder just before midnight. Rob went on deck and was greeted by the sight of lightening out to sea stretching both north and south as far as the eye could see. A quick check of the radar showed three separate lines of thunder storms heading our way. So much for the fine weather forecast. We laid out an extra 15 metres of anchor chain giving us a total of 40 metres down in just over six metres of water and waited.


Within 15 minutes the sleepy shore and calm water we’d anchored in were transformed into a raging surf beach as 20-30 knot gusts drove in from the sea. Heavy rain stung any exposed skin and made visibility extremely limited. The quite sizable waves were breaking just 10 metres or so from our stern and the strong wind had the boat trying to sail at anchor, continually stretching out on her chain from side to side. For the next four hours we stayed in the cockpit being bounced around and pelted with stinging rain keeping a close watch on the distance between us and the now dangerous beach. There was nothing Joy and Trevor could do to help so they kept out of the way by staying in their bunk but suffered an extremely rough night in their forward cabin. Rob was by the wheel the whole time with the engine running, ready to power away from the maelstrom behind us the moment we felt the anchor lose its grip. If we were pushed back into the breakers the sand churned up off the bottom could quickly clog the filters on our motor’s water intake with an inevitable outcome of the engine failing and Alcheringa being washed aground and pounded by waves. Certainly not the way we wanted to end our Mediterranean cruising.


By about 4.30am the lines of storms had passed although the swells continued to pound the beach and the wind was still reasonably strong. Thankfully the additional chain we’d put out did its job and the anchor held firm despite the wind and sea’s best efforts. As soon as the eastern sky began to lighten in the predawn, we upped anchor to head for the safety of open water. We had no intention of waiting for sunrise and set course for the security of the marina at Vibo Valentia almost 40 nautical miles away. We could feel the tension flow out of our bodies as the autopilot went on and we finally swallowed down the mugs of very welcome hot coffee we'd longed for all night. After the excitement of the early morning, it was a fairly miserable eight and a half hour slog south into a fifteen knot headwind and sloppy seas under sodden overcast skies. Not fun.


In incredible contrast to what we’d experienced the rest of the day, as we approached our destination the sky cleared, the wind dropped out and the seas abated providing a fantastic welcome into the harbour at Vibo Valentia.  The staff guided us to our well sheltered berth, we found the marina is managed by a very friendly Canadian woman who was extremely helpful and we discovered it has very nice facilities including laundry and even its own café/bar. We were in no doubt we were going to enjoy our few days in Vibo Valentia and the storm dramas were all but forgotten. Life is still good on Alcheringa.


Since returning to Australia at the end of last European summer’s wanderings around the Med, we have been extremely busy, catching up with friends and family, finishing and publishing our first book, ‘Stuff it. Let’s go sailing anyway’, mounting a very successful exhibition of Karen’s artwork and buying a new boat to sail the western Pacific and South East Asia.  We’re now working at finalising the story of our adventures in the Med in this blog and getting it all back to current so keep checking back for new instalments.