Karen’s parents, Trevor and Joy, stepped off the boat at Vibo soon after dawn and made their way to the station for their train trip up the Italian south coast to Rome. From there they would continue their European adventure via a luxury coach tour all the way to the United Kingdom. It had been fantastic having them on board to share so many highlights such as Isla di Capri and Amalfi and we’d all enjoyed the long overdue time together.


After our farewell’s we got stuck into preparing Alcheringa for sea and had the ropes off within the hour for our passage across to the Aeolian Islands. First stop, Stromboli. It was a beautiful Mediterranean summer’s day but unfortunately the wind was having a sleep in so initially we were left to motor along the coast over smooth seas before heading offshore. Breakfast underway in the cockpit was certainly a pleasant introduction to cruising on Alcheringa for our friends Tony and Lynne.

Rob had met Tony while completing his Royal Yachting Association Skipper’s qualifications sailing on Moreton Bay at home in Australia. He and Lynne chase the sun, escaping British winter living in Australia for that part of each year but return to their lovely home in Buckinghamshire for the northern summer. They have a trailer sailor in Oz and have got into a boat share plan in the UK spending a few weeks sailing the south coast when they’re home. We had enjoyed a great couple of weeks staying with them in Buckinghamshire the previous year and were very pleased to be able to return the hospitality.

Fortunately the wind picked up a little during the day and we were able to get the sails up pushing westward towards the home of one of Europe’s most active volcanos. A small pod of dolphins joined us for some fun and games around the bow shortly before the tip of Stromboli’s smoking volcanic cone came into view on the horizon. A quick look at the chart plotter revealed we were sailing in 2,400 metres of water which may have accounted for the brilliant colour and clarity of the sea around us.

The volcanic island of Stromboli rises over 900 metres above sea level straight up out of these deep waters and much of its coastline is vertical cliff face. Just fifty metres from most of the shoreline depths already reach thirty or forty metres and in some spot well over a hundred, all much to deep to anchor in.

We arrived at our planned anchorage off the north eastern corner end of the island where there is an area of shallower water about 5.30pm but were totally unprepared for the scene that greeted us. There were literally hundreds of yachts and large motor cruisers squeezed into the relatively small patch and we could see many more coming. We decided it was time to ignore the Italian law which requires boats to anchor 100 metres from a beach and take advantage of Alcheringa’s shallow  draft of just 1.6 metres. We edged our way through the crowd and went inside them all, close to the black sand beach , where we dropped anchor in a bit less than 2.5 metres. There was not a lot of room for error but at least we had the benefit of very good holding in the sand as we saw many boat have a lot of trouble getting hooked in further out. As it got tighter and  tighter for room it wasn’t long before any boat with a shallow enough draft and game enough skipper was joining  us in close to the beach


Stromboli has been in almost continuous eruption for the past 2,000 years. A pattern of eruption is maintained in which explosions occur at the summit craters, with mild to moderate eruptions of incandescent volcanic bombs, at intervals ranging from minutes to hours. Eruptions typically result in short, mild, but energetic bursts, ranging up to a few hundred meters in height, containing ash, incandescent lava fragments and stone blocks. Stromboli's activity is almost exclusively explosive, but lava flows do occur at times when volcanic activity is high. An effusive eruption occurred in 2002, the first in 17 years, and then again in 2003, 2007, and 2013.


It was a little surreal enjoying post passage beers with the rumbling eruptions of the active volcano to one side of us and a massive fleet of holiday makers on the other. Sundowners that evening were truly memorable but given the crowded nature of the anchorage we abandoned the idea of a night circumnavigation of Stromboli to witness the fire and lava show visible from the north-western side. It would have simply been a nightmare trying to get a spot to anchor when we got back.


Instead we set off around the northern points mid-morning the next day after most of the bareboat charterers had gone on their merry ways. It was truly awe inspiring watching explosive releases of volcanic gases hurl massive fireballs of rock and lava high above the peak of the crater at surprisingly regular intervals. With some of these smoking boulders splashing into the sea below, it was easy to see why our charts showed a safety exclusion zone stretching  .2 of a nautical mile (380 metres) from the shore. Skirting along the edge of this prohibited area Alcheringa was very quickly coated in a thick layer of very, very fine volcanic ash.

In search of cleaner air to breath, we left Stromboli in our wake and headed south.  We planned to anchor off the town of San Pietro on Isla Panarea but along the way sailed past a spectacular small rock islet called Basiluzzo. There were a number of boats anchored close into the cliffs of its northern side but we spotted what looked like just enough room for us to drop anchor in the seclusion of a very small indent on the southern side. As it would provide protection from the mild north westerlies predicted overnight we jumped at the chance to get away from the summer hordes for a while. Shortly after we got nicely hooked in at the first attempt another yacht did anchor in our little inlet for a couple of hours but we didn’t let them spoil our relaxing afternoon swimming, enjoying the sunshine, some fine Italian vino and great conversation. Life is good on Alcheringa. 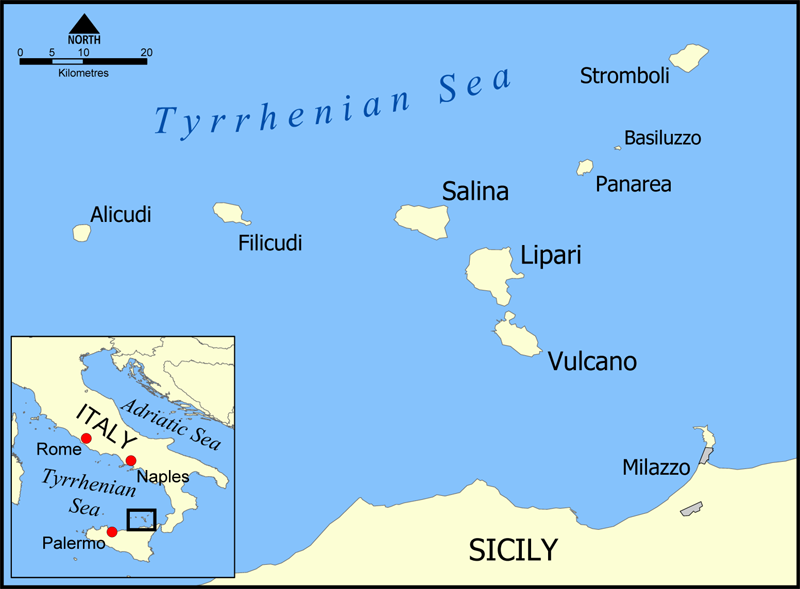 We had obviously picked the right side of the islet as late that night a very large motor cruiser moved around from the northern side looking for calmer waters for their high dollar charterers to sleep in and took about an hour and four or five goes at anchoring in the deeper water outside us before finally deciding they were secure enough. It provided us with some entertainment while we downed our final night caps before hitting the bunks and sleeping like babes.


Since returning to Australia at the end of last European summer’s wanderings around the Med, we have been extremely busy, catching up with friends and family, finishing and publishing our first book, ‘Stuff it. Let’s go sailing anyway’, mounting a very successful exhibition of Karen’s artwork and buying a new boat to sail the western Pacific and South East Asia.  We’re now working at finalising the story of our adventures in the Med in this blog and getting it all back to current so keep checking back for new instalments.