13 -18 November
Up early, all packed, back on a bus and time to move on again. We were headed further north up the Malay peninsula to Penang via Ipoh and Butterworth.  The bus trip itself was relatively uneventful but the drive down the range did feature fantastic scenery and the excitement of a number of locals on big sports motorcycles and a range of performance cars including Porsches, Ferraris and even a couple of Lambos playing Sunday morning boy racers up the wide, smooth, mountain roads. From our spot in the front seats it was amazing to watch how wide a speeding rider or driver’s eyes got when confronted with the front of a bus halfway around a tight mountain turn. No doubt ours were just as wide a couple of times when we thought head on contact was inevitable but all managed to avoid us through either immense skill , outright luck or a combination of both.

We arrived in Penang mid afternoon and headed for our budget motel where we had arranged to rendezvous with crew mate, Marc, fresh out of hospital after 10 days on an IV drip. We’d chosen a place close to the city centre with the interesting name of the Mingood Hotel. As usual we’d booked it over the internet and weren’t sure whether the name was short for minimum good but didn’t really care as long as it didn’t turn out to be maximum bad.  In the end it was actually all good, with very helpful staff, a nice air-con room, free WFI, cable TV and breakfast for what we’d pay for the meal alone in Australia. To see where the hotel was click on the link http://www.findmespot.com/mylocation/?id=6VDVX
It was great to catch up with Marc and we enjoyed a good meal and drinks that night very happy to see Meerkat back on his feet and looking OK. After dinner we headed up on to the hotel’s roof terrace with a bottle of wine chatted late catching up with all that had happened with him on Rogue and in the hospital as well as what we’d been up to on our travels since Singapore. (OK it was more than one bottle of wine) 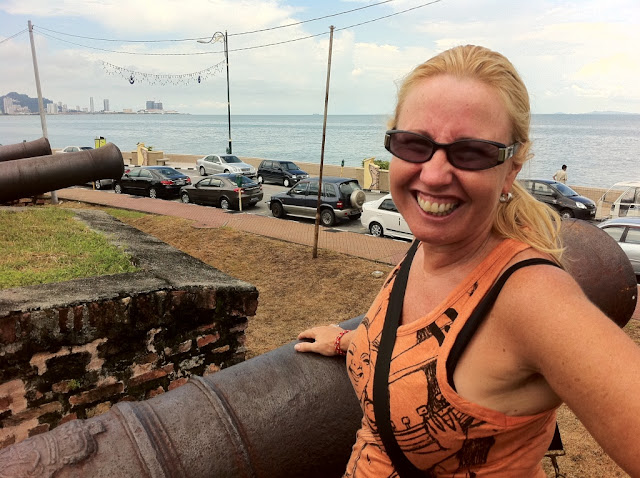 Next morning the three of us started our days of exploring the rich heritage of Penang. The history of modern Penang, originally part of the Malay Sultanate of Kedah, began when the island was leased to Captain Francis Light, an English trader-adventurer  working for the East India Company, in exchange for military protection from Siamese and Burmese armies who were threatening Kedah. For Light, Penang was a convenient location for trade and an ideal location to curtail French expansion in Indochina and Dutch foothold in Sumatra. Light landed on Penang in 1786 at what was later called Fort Cornwallis and took formal possession of the island in the name of His Britannic Majesty, King George III. In Malaysian history, the occasion marked the beginning of more than a century of British mismanagement  in Malaya.
Unfortunately for the Sultan, the EAC's new governor-general Charles Cornwallis made it clear that he could not be party to the Sultan's disputes with the other Malay princes, or promise to protect him from the Siamese or Burmese. Unbeknownst to Sultan Abdullah, Light had decided to conceal the facts of the agreement from both parties. When Light reneged on his promise of protection, the Sultan tried unsuccessfully to recapture the island in 1790, and the Sultan was forced to cede the island to the company for an honorarium of 6,000 Spanish dollars per annum.

﻿﻿Light established Penang as a free port to entice traders away from nearby Dutch trading posts. He also encouraged immigrants by promising them as much land as they could clear and by reportedly firing silver dollars from his ship's cannons deep into the jungle. A considerable Chinese population joined with the various Malays and growing smattering of westerners to see Penang grow into a powerhouse trading port but it was to eventually be overshadowed by the rise of Singapore. Many early settlers, including Light himself, succumbed to malaria, earning early Penang the epithet "the white man's grave".
During the First World War, in the Battle of Penang, the German cruiser SMS Emden surreptitiously sailed to Penang and sank two Allied warships off its coast.  During World War II, Penang, then a British island garrison, suffered devastating aerial bombardments and finally fell to invading Japanese forces in December 1941. Penang under Japanese occupation was marked by widespread fear, hunger, and massacres which targeted the local Chinese population. 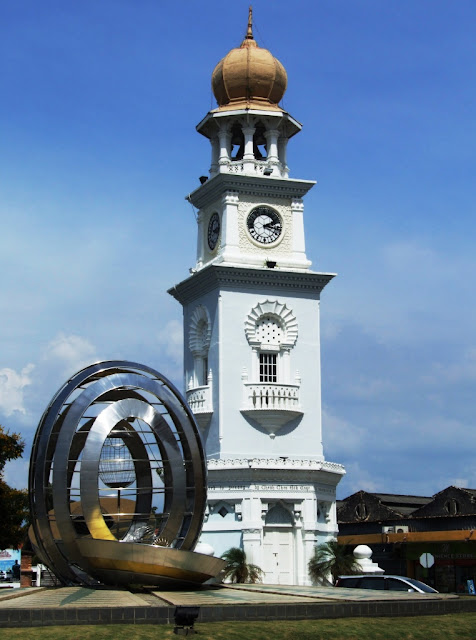 Post war development sparked concerns of the continued existence of heritage buildings and Penang's collection of pre-War houses (southeast Asia's largest), leading to more vigorous conservation efforts. This was paid handsomely when on 7 July 2008, George Town, the historic capital of Penang, was formally inscribed as a UNESCO World Heritage Site, alongside Malacca. It is officially recognised as having "a unique architectural and cultural townscape without parallel anywhere in East and Southeast Asia".
It was this heritage that had put Penang on our Malaysian must do list and we were keen to see how it compared to Melaka which we’d really enjoyed. Our hotel was on the edge of the protected zone so we were able to do most of our touring on foot, wandering through street after street of original buildings. One stop was Fort Cornwallis on the seafront. It was great to see the facility so well preserved and well worth the small admission price to stroll around the fortifications amongst the large number of centuries old canon, ammunition magazine and chapel.

George Town’s British roots are very obvious with many government departments housed in heritage buildings of clearly English architecture and even a very ornate clock tower built in honour of Queen Victoria’s reign dominating the wharf area. The Chinese influence is also everywhere and spreads much further afield than just the obligatory Chinatown precinct. The Khoo Khongsi Chinese temple was simply stunning. The intricate detail of every piece of the building and copious amounts of gold leaf embossing was almost too much to absorb. Strangely enough it was used as a set for the recent remake of “The King and I” starring Jodie Foster when the movie makers were banned from Thailand.


﻿ The Indian precinct is full of restaurants interspersed with clothing and fabric shops packed with brilliantly coloured saris and the like. Blaring Indian music and rich odours of spice filled cooking dominate the streets making walking through the area a real experience for the senses. Our lunch in one of these establishments was so good we returned two days later for an encore performance.
After day’s exploring in the heat we also made a great discovery just up the street from our hotel, a bar that has been a favourite watering hole of Royal Australian Air Force personel from nearby RAAF Base Butterworth for over forty years. Every wall was decorated with photos, RAAF insignia and even a souvenir tea towel from our home town of Ipswich and a number of serving personnel were enjoying a day off with a few cold ones. Given the temperature outside it was an easy decision to join them for a while. 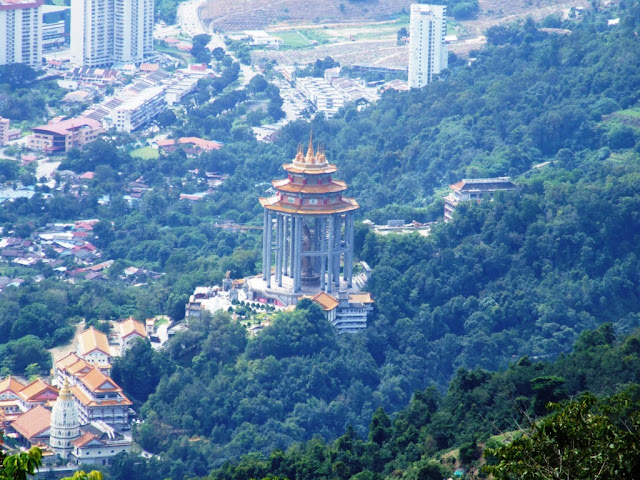 A real highlight of our time on the island was a visit to Penang Hill. Located a short drive from George Town. The hill is accessed by a very impressive, high speed cable car ride up the incredibly steep hillside.  At the foot of the hill there is a huge Temple under construction that houses a 30 metre  high bronze statue of Buddha. The statue is so big it was clearly visible from the roof of our hotel seven kilometres away.
We took the 30RM ($9.00 Aus) ride up the hill late morning . At the top the views are nothing less than breathtaking. There’s also a very ornate and interesting Hindu temple which the public is welcome to wander through, after removing footwear of course. 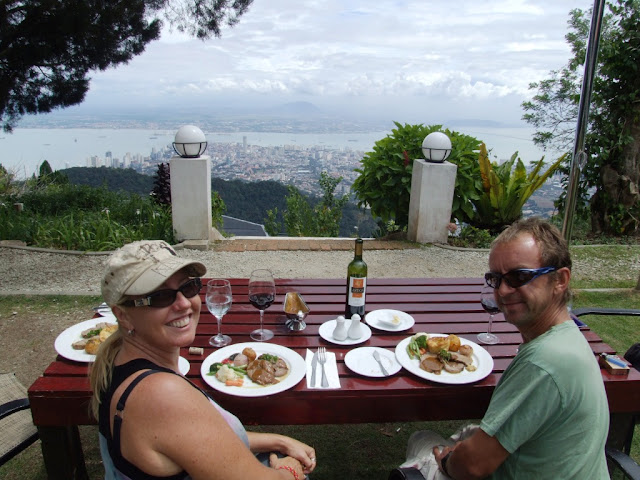 After taking in all the sights, we were debating whether we would grab a bite of lunch from the small food stalls on the hill or head back to George Town when we spotted a sign leading up to David Brown’s Restaurant and Tea Gardens.  It looked a bit upmarket for us but we decided to have a sticky beak anyway. What a find, a very impressive colonial building surrounded by beautifully landscaped grounds and even better views than the public areas.  We quickly decided to sit at the table right at the front of the garden so we could just order a coffee and thereby buy some time to enjoy the view for a while. Then the menu arrived.

﻿
﻿Four hours, three bottles of wine, two roast beef with Yorkshire pudding , a rack of lamb plus deserts later, three days food budget was blown and we didn’t care one bit. Sitting there chatting and looking down on the world, it was one of the most enjoyable long lunches we have ever experienced. As tempting as it was to stay for dinner to also enjoy the view of the city lights, we headed back to down to reality before the whole week’s budget was gone. By western standards the prices were actually cheap but, compared to $4 Aus main courses at the local restos, it was absolutely decadent.  If you ever go to Penang, David Brown’s Restaurant and Tea Gardens is a MUST DO in capital letters.
George Town, Penang Island was yet another stop in our Malaysian wanderings that we enjoyed greatly, particularly given that we had been rejoined by Marc,  however it too had failed to displace Tioman Island from its spot on top. Without taking too much away from George Town which was very good, we also felt Melaka had done an even better job of preserving and now presenting its heritage to the world. 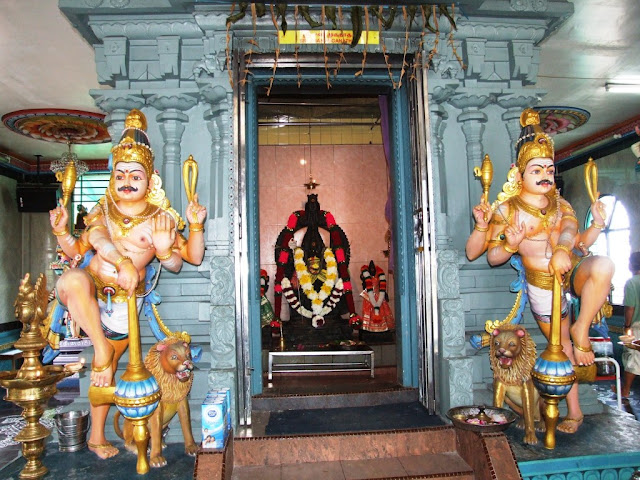