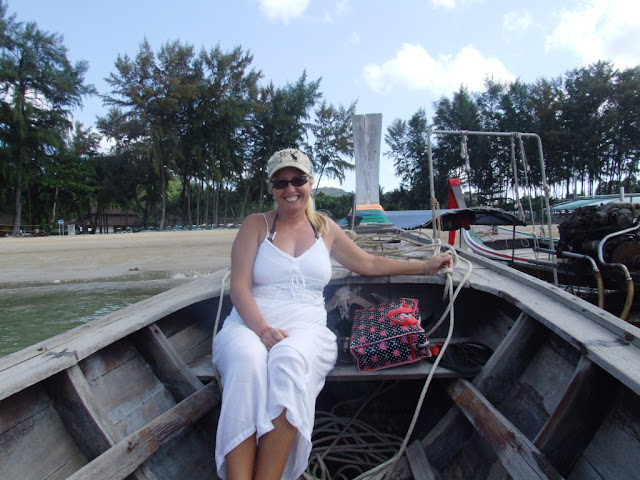 We booked our transport to Krabi in Thailand at a tour agent in Langkawi. Our ticket included being picked up by a taxi from our accommodation and taken to the ferry terminal, where our driver organised our ferry tickets and steered us to immigration to check out of Malaysia. We then had a fifty minute high speed ferry ride to Saturn, in southern Thailand where we were again met by someone to guide us through Thai immigration and customs and then put us on a Tuk Tuk (local taxi) for transfer to the bus terminal and our four hour trip north to Krabi – and all this for a little over Twenty Australian dollars each.  Now that’s value.

﻿We arrived at the bus station in Krabi a little after five and got a car to our accommodation. We were again looking for something a little above hostel level when we searched the web for a place to stay in Krabi and finally settled on the Check Inn Resort at Tub Kaek Beach despite it being a little more expensive than our normal budget at $39 a night including breakfast. It turned out to be worth every cent and a lot more. When we arrived we found ourselves with huge, well appointed rooms in a resort with huge pool, range of restaurants on hand, gym, dive shop, Spa and very friendly, helpful service all located a short stroll through the Sheraton resort to the beach.  (The Sheraton featured as the wedding location in the movie Hangover 2)﻿
Next morning we were joined by Sally, a Brit who had been on Further then Rampisard on the Sail Indonesia Rally and had bussed up from Penang to meet us after travelling on her own through Malaysia. We spent the day exploring, wandering the beach and sampling the excellent food and Singha beer in the local restaurants.

Day two involved lazing around the pool, more good food and then we were off to trek through the jungle on elephants. On the advice of our resort staff we booked for the late afternoon, last session of the day. They take a maximum of 12 people on this trek then when it’s over you can go with the handlers and elephants to the river for bath time a unique opportunity to help wash these beautiful animals. 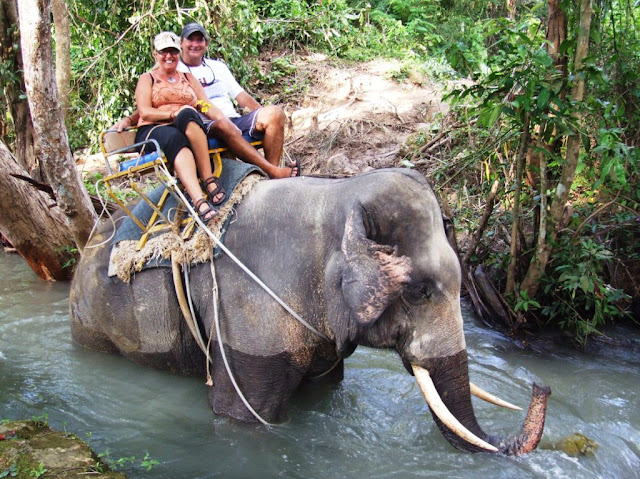 Sitting atop the elephant was pretty cool winding our way through a rubber plantation and  jungle river although our elephant did have an over active tail that managed to flick so much mud up and over us we weren’t sure who was going to need bath time more, us or him. After the trek while the handlers were removing the seats from the elephants and getting them ready to wash we were treated to a performance of tricks by a youngster. This included shooting basketball hoops, kicking a soccer ball, playing a harmonica etc. It’s cutest job was picking up a hat and gently placing it on each person’s head, taking a bow and trumpeting after each successful crowning moment. We rewarded our entertaining friend with a feed of bananas. They work cheap in Thailand.

﻿
﻿ Heading into the water with such huge animals proved a little daunting initially but once we realised how much our elephant was obviously enjoying the hands on attention we quickly relaxed. Splashing water over and massaging an elephant is probably something that not a big percentage of people would get to experience and we loved it. That over active tail did come into play again at one point though, giving Karen an unexpected surprise as it whipped very up close and personal between her legs under the water. Woohoo!

Enjoying another ridiculously cheap but excellent Thai meal at a local resto that night, our elephant experience was all the four of us could talk about as we relived the afternoon over and over. That was until Marc received a text message to say that due to a couple of withdrawals, Rob and Karen now also had berths on Curious to sail in the King’s Cup Regatta. The day just couldn’t get any better.
﻿ ﻿﻿﻿﻿
﻿﻿﻿Rob was keen to get in some diving and practice what he’d learned on Tioman Island so headed out early next morning for a three dive trip explore the areas underwater treats. Meanwhile Karen, Sally and Mark had negotiated with one of the local long tail boat operators to take them over to the incredible Raleigh Beach for the day. This area can only be reached by boat and is world famous for its crystal clear waters, sand beaches and spectacular, undercut limestone outcrops that attract cliff climbers from far and wide. It's said to provide amongst the best rock climbing on the planet.

﻿
﻿On the way to the beach, the trio spotted a familiar sight in the form of Cheetah 2, the 30 foot sloop sailed in the Indo Rally by young Kiwi guys. After getting their boatman to detour by they chatted with Mike, the skipper, who said they’d meet them on the beach shortly for brunch. They then headed in to shore and secured a good table at one of the beach restos and looked forward to catching up with the guys we hadn’t seen since Singapore. Karen, Sally and Mark were enjoying some coffee, engrossed in conversation when looking out to sea suddenly realised that Cheetah 2 had upped anchor and sailed away. Hmmmm! Must be time to change deodorant our something. Anyhow they had a great day casually exploring one of the world’s wondrous spots and marvelling at how the rock climbers didn’t plummet down and splash in the sea.


﻿ Meanwhile Rob was 32 metres below the surface exploring a wreck. The King Cruiser was originally a car and passenger ferry in Kobe, Japan before being purchased by a Thai company to be used as a passenger ferry between Phi Phi Islands and Phuket. In May 1997 the ferry struck Anemone Reef and sank nearby. There were over 500 people on board when she went down but no lives were lost and now the wreck remains as a great underwater attraction surrounded by masses of small fish including the odd barracuda and shark.

The second dive of the day was a little shallower at 22 metres on nearby a Shark Point. It's made up of 3 large rock pinnacles, the largest of which breaks the surface. It derives its name from the leopard sharks that are resident there. These docile creatures grow to approximately 2½ metres, are nocturnal, and sleep on the sandy bottom at the edge of the reef during the day. The sheer density and diversity of coral and fish life makes diving here a wonderful l experience.  Shark Point's most colourful feature is the profusion of the purple and pink soft corals that cling to the rocks, and its huge barrel sponges.

The final dive was on Anemone Reef that had led the King Cruiser to her demise. This is a single pinnacle of coral covered rock that rises from a depth of 20 metres to a hidden peak 6 metres below the surface. Diving here involves heading for the bottom and then slowly circling the pinnacle in an upward spiral until reaching the top for a safety stop before surfacing. Large schools of fish are everywhere on the reef, including various families of snapper, groper and fusiliers. Soldierfish congregate together in the many cracks and crevices which are also a haven for smaller critters such as the yellow tiger-tail seahorses and large numbers of moray eels.

﻿
﻿While the diving was awesome, three in a day was exhausting so by the time Rob joined Karen, Sally and Marc back at the beachfront restaurant near the resort for dinner that night he was a very tired boy. More great food washed down with a couple of G’n’T’s and Singha beers ensued as we all agreed Krabi would go down as one of the real highlights of our trip. Meanwhile heavy rain had moved in from the sea. Trapped in the restaurant by the downpour, there was nothing to do but have another drink and wait for it to pass - except it didn’t pass. It seemed inconceivable that three hours later the rain was still torrential with not the slightest sign of even easing let alone coming to end. Finally about 11.00pm Rob really couldn’t wait any longer and decided to make a run for it which involved negotiating his way through the grounds and lobby of the Sheraton back to our resort.

Now visualise the sight of a soaked to the bone, very bedraggled Rob, suddenly bursting up the stairs from the gardens at full sprint into the huge Sheraton foyer sliding uncontrolled across the marble floor almost into the reception desk manned by a wide eyed Thai girl stunned by this sudden rush of activity shattering her late night solitude. No sooner had this apparition materialised, it disappeared in a traction less, slip sliding motion out the entryway and up the drive leaving only a trail of water across the marble. The next surreal moment happened as the security guard stepped out of his gate house, opened the boom gate and saluted as the mad westerner raced past. Only in Thailand.

﻿
﻿ After also giving up on the idea of being able to wait out the rain, an hour or so later three more mad westerners, one carrying a huge black garbage bag containing handbags, ipads, cameras and associated moisture adverse items,  dripped their way across the marble floor and through the lobby. Be it at a stroll rather than a sprint as, unlike Rob, having realised that speed across the ground would make absolutely no difference to how wet they got, Karen, Sally and Marc enjoyed and far more casual, if equally soaking, trip back to our resort, even taking the time to stop and return salute to the giggling security guard as they passed under the boom gate. No doubt the evening provided the Sheraton staff with the most amount of amusement since the filming of Hangover 2.

The dawn broke to crystal clear skies next morning as we reluctantly said goodbye to Krabi and embarked on our ferry trip over to Phuket and the King’s Cup Regatta.