18 – 28 November  2011
After an enjoyable few days exploring Penang the next and last stop on our Malaysian adventure was the island of Langkawi. Crewmate, Marc, was travelling with us through to Phuket in Thailand. He had a berth organised with Steve and  Trish Brown on their 56 Oyster racing in the King’s Cup Regatta and our plan was to see if we could find a boat to crew on as well or, alternatively, just take in the atmosphere and socialise with the racers.
Thailand has an unusual visa policy in that if you arrive by plane you get an automatic 30 day tourist visa however if you enter the country overland or by boat you only get fifteen days unless you apply for an extension at a consulate beforehand. We weren’t aware of this little trap until we were leaving Penang and it was too late.  With our flights back to Singapore from Phuket already booked for December 12, this meant that we had 11 days to fill in Langkawi before we could enter Thailand to comply with the 15 day limit.


With a choice of 5+ hours on a bus or 90 minutes on a high speed ferry, the transportation choice was fairly simple. It’s much nicer scooting across the water looking at the boats and islands on the way than droning along motorways looking at road signs. We arrived at the ferry terminal in Kuah late morning and grabbed a taxi to our budget accommodation on the other side of the island at Pantai Cenang.
We were pleased to find the Kedawang Beach Inn was pretty much as described on the internet, just metres from the water and beach bar/restaurant , clean, air conned rooms, very friendly staff and free WFI, sort of. When we asked about the WFI we were given a piece of paper with all the wfi passwords of the neighbouring hotels and backpacker hostels and told to just use whichever one we could pick up.  One way to cut costs we guess.
Historically Langkawi was under the rule of the Sultanate of Kedah for a very long time. Eventually, it came under British rule during the colonial century and then, for a brief period during World War II, it was controlled by the Thai monarchy. This has resulted in some Thai influence on Langkawi’s culture, evident by the number of Thai restaurants and Siamese-inspired sights.


After the war, the island became known as a nesting ground for pirates. The many islands and dense, verdant jungle provided much-needed cover for their dubious activities while providing an excellent hide-out. Meanwhile, the island’s inhabitants continued to live a sleepy life in wooden villages, pushing bullock carts and harvesting paddy fields. Life remained simple and easy for many years but when progress came it happened in a rush.
Dr Mahathir Mohammad, the fourth Prime Minister of Malaysia, had practiced on the island as a GP in his younger years. Then in the country’s top job, Dr Mahathir proceeded to work closely with Kedah authorities in 1986 to modernise and develop Langkawi into the tourism he had envisaged all those years ago.

﻿
The huge boost to the transformation of Langkawi occurred when the island was granted duty-free status, attracting tourists and locals alike to cheap goods such as liquor and cigarettes. Soon, Langkawi hotels and restaurants started popping up as the tourism industry began to boom . An international airport and cheap Air Asia flights has seen the  island become Malaysia’s best known tourism destination.
﻿﻿
Rather than a single island, Langkawi  is actually an archipelago of 99 islands 30 kilometres of Malaysia’s north west coast. Surrounded by stunning turquoise waters, the interior of the main island is a mixture of picturesque paddy fields and jungle-clad hills and mountains. The offers excellent diving opportunities and contains scores of other sightseeing and activities.
﻿


The three of us however were more interested in just kicking back and relaxing for a while to fill in time before we headed to Phuket.  As a result, the majority of our days were spent lazing around the beach reading, cooling off with a swim or fourteen and enjoying the duty-free prices at the excellent beachfront bar-restaurant. We did however get active a couple of times. We hired one of the numerous local speed boats to run us over to nearby Reebak Island to visit the marina where we were able to catch up with a few people we’d met on the Indonesian Rally. 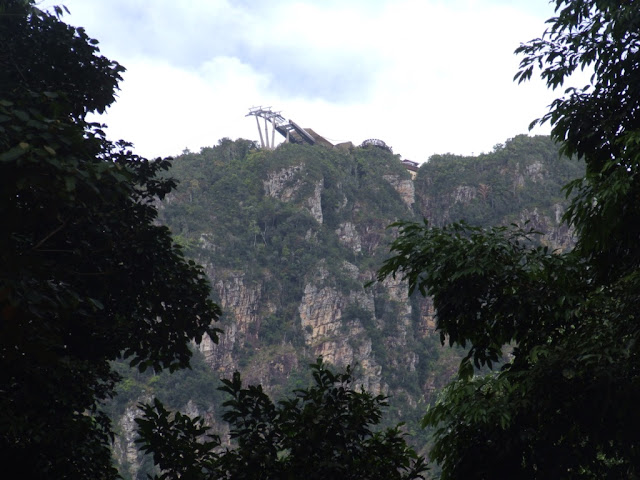 We also became bikies again, back on a throbbing 125cc moped to have a look around. Number one on our to do list was the cable car that runs up to the island’s highest peak offering unparallel views, apparently. We never actually found out how good because every time we tried to go up it was closed due to cloud or high winds. Locals told us on average the cable car only runs one day out of three and unfortunately despite numerous attempts we never struck it on the right day. 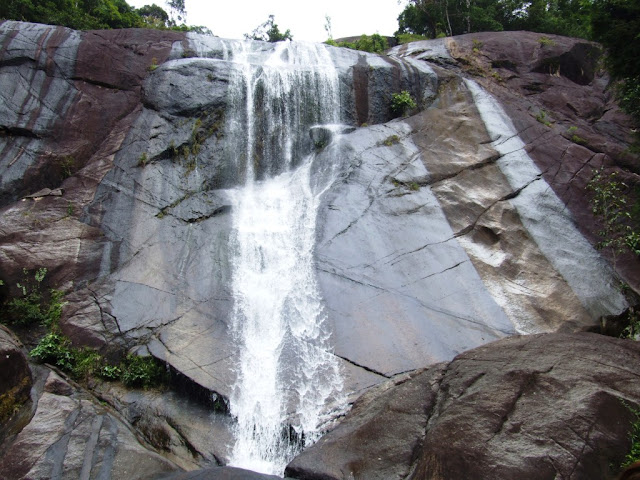 We did enjoy a great walk through the jungle to a very impressive waterfall and swimming hole. The antics of the monkeys along the way never fail to entertain as they go to great lengths to get the tourists to ignore the Don’t feed the wildlife signs everywhere. Very few visitors can resist the beseeching big eyes and outstretched hands hanging from the bushes. Those that do are at serious risk of having any food or drink they are carrying disappearing up a tree at great speed in a snatch and grab raid by the less well behaved primates. We saw one monkey run off with an unopened Coke can and then watched as it used its teeth to tear the aluminium apart to reach the contents, messy but effective.

We also took a taxi ride back over to Kuah to visit the Royal Langkawi Yacht Club. Rob’s cousins, Christine and David have their yacht Eagle Spirit moored in the marina and we were able to check it out and take a few photos of how she’s looking to email back to them in Oz. We were impressed with how clean the water was in the marina which no doubt explained the lack of growth on her hull despite being tied up for an extended period.
One aspect of Langkawi all three of us really enjoyed was the huge range of excellent food of every national origin available from the apparently limitless number of restaurants. Owned by an extremely friendly German woman, the Red Tomato became our favourite breakfast haunt, great service, excellent well priced food and a nice relaxed atmosphere with good WFI for travellers like us.


﻿ By the time we enjoyed a long casual breakfast, checked our emails, facebooked for a while, uploaded a blog chapter or another photobucket album it was usually time to head for the beach out front of our new local, the beachfront bar beside our accommodation.  Great spot for a cold Tiger beer, JD  or G&T and an excellent lunch and dinner menu.
Most nights we tried a different eating place working our way through Thai, traditional Malay, Indian, Italian, BBQ seafood, Cantonese and Western. We never had a bad meal anywhere we went and prices were reasonable by Asian standards which equates to cheap as chips compared to home.
We know there’s so much more we could of done on Langkawi but what we did well was enjoy ourselves. The only downside to our time on Langkawi was being onshore looking at all the fantastic islands and cruising areas around us and not having a boat to sail them on. Next time!