To Bundaberg, a Mayday and helping turtles nest at Mon Repos


If time wasn’t an issue we could have stayed at beautiful Lady Musgrave Island for days if not weeks. However, the calendar was ticking down towards Christmas and we had to get to Brisbane where our special crew member, eight year old Grandson, young Master Kristian, would leave us and fly home to his Mum and Dad in time for the holidays. We were certainly going to miss him. It had been fantastic having him on board with us experiencing life afloat on the Great Barrier Reef. The adventure was still far from over though. Our next stop was to be at the Port of Bundaberg Marina for a side trip to get up close and personal with the nesting turtles at the world famous Mon Repos Beach.


We raised anchor nice and early for our ten hour passage to the mouth of the Burnett River and exited the channel through the coral protecting the lagoon at first light. We had a minor moment when we came across two large turtles mating on the surface of the water right in the centre of the channel.  Captain Poppy squeezed Our Dreamtime over as close to the coral as he dared trying not to interrupt their humpy rumpy and left Admiral Nanny to answer Master Kristian’s eager questions as to why one turtle was riding on the other’s back.


We motored west to clear the island and the fringing reefs before turning south. A modest NNE breeze was blowing  which we anticipated would strengthen a little as the morning progressed. We rigged to run downwind wing on wing with the mainsail to port and the genoa to starboard. This necessitated running a bit to starboard of our desired course which we would have to make up for later but at least we could silence the engine and sail.


Unfortunately there was a fare sized swell running from the nor east which saw the boat wallowing around as they rolled through under us from the stern quarter. We were hopeful that more power in the sails would improve the boat’s motion but unfortunately the wind wasn’t cooperating and remained at around 8-10 knots true which only pushed us along at around three and half  to four knots.  We persisted for a fair while waiting for it to strengthen but when Kristian became seasick for the first time ever on the boat we decided to start the engine and motor sail along the lay line on a port tack.


It did improve the motion of the boat and we were now making six knots and better towards our destination. Thankfully, Kristian also recovered his spirits pretty quickly helped by the steadier action and being distracted by a booby bird that landed on our dinghy and hitched a ride for quite a few hours. He was particularly amused by how much poop Captain Poppy was going to have to clean out of the inflatable when we reached the marina.


Chugging along on auto-pilot we were fairly relaxed while still maintaining a wary eye ahead in case anything untoward should happen to be around in the water but our casual day changed when we heard an all ships call from the Burnett Heads Volunteer Marine Rescue asking if anyone had just heard a Mayday transmission.


It transpired that he’d heard a feint call of ‘Mayday, mayday, mayday. Going down off Burnett Heads,’ but after repeated calls seeking details no further transmissions were received.  He appeared to be starting to doubt his ears when Hervey Bay VMR came on confirming that they had also heard the short mayday call.


An all stations bulletin was then issued to be on the lookout for a vessel or persons in distress in the area and our casual watch became a very active search of the waters surrounding us as we made our way south. The VMR launched their boat to search and rescue helicopter arrived on site soon after and began a grid pattern search starting from the mouth of the river.


Many hours later, it was all still continuing as we arrived at the marina so we contacted the VMR and reported that we had kept a very active watch along our course from Lady Musgrave Island and not sighted anything. We were in two minds about the whole affair. The thought that it could be a hoax made us angry about the wasted resources but we almost hoped it was a prank as thinking an unknown number of persons could be in the water with a very slim chance of rescue was far worse. Next morning we heard a VMR broadcast for vessels to be on the lookout for an overdue six metre powerboat but never found out what the outcome of the whole affair was.


Next day after giving the topsides a nice bath of freshwater we made use of the marina’s cheap hire car service and headed off to top up our provisions and give Kristian a look at Bundaberg. He was very keen to buy his Dad a Christmas present at the Bundaberg Rum Distillery as Daniel is a keen consumer of the product. 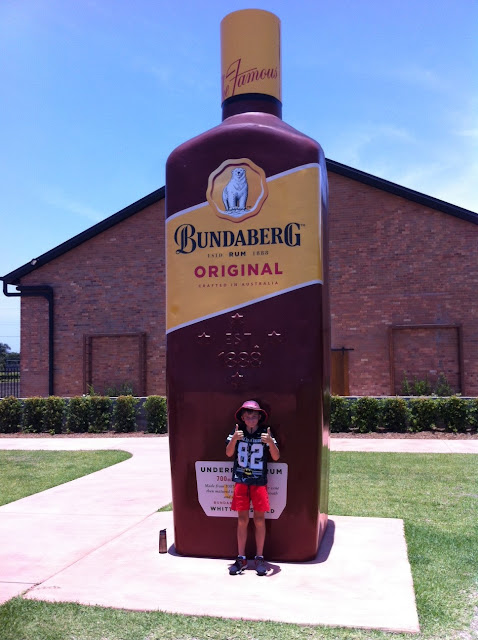 The main reason for our stop here though was for Kristian to experience nearby Mon Repos Beach where you can join Wildlife Rangers at the Turtle Centre on a guided tour to watch marine turtles nesting each evening from November to January and hatching from January to March.


We arrived early for a 7pm start, and were placed in our turtle encounter group for the night. Only  tour participants are allowed on the beach after 6pm so things can be controlled to protect the turtles. The rangers and volunteers patrol the beach looking for turtles coming ashore and once they arrive, call your group and guide you onto the beach. We were able enjoy the displays and videos presented in the amphitheatre while we were waiting.


It wasn’t long until we were called but before being escorted to the beach the group received its instructions. Nesting turtles are easily disturbed by artificial light and movement especially when leaving the water, crossing the beach and digging their nests.


•To protect nesting and hatching turtles, keep all lights off including mobile phone screens, avoid unnecessary movements and remain with your allocated group.


•Rangers let you know when you can take advantage of the limited opportunities to use cameras. All other times it’s a strict no photos policy


As our group made its way along the beach in the darkness towards our allocated turtle we had to wait as another began emerging from the water just in front of us. We were told to stay absolutely still so as not to spook it back into the water. The turtles have no hearing and poor eyesight once out of the water but can detect movement which they regard as a threat. It was odd to be able to carry on a normal conversation as we watched the very heavy creature drag itself up towards the dunes just a few metres in front of us. As long as we didn’t move, it had no idea we were there.


Once the turtle settled on a spot and began digging its nest in the sand we were guided up and formed a semi-circle behind and out of its sight. It was very well organised and everyone was able to see the incredibly dextrous action of the rear flippers removing sand from the hole then the eggs themselves being laid. Once the turtles begin laying they go into a virtual trance and nothing will interrupt them from the task at hand. It’s at that stage that we were invited to move around to the front and take photos.

Kristian was enthralled by the whole process and clicked away taking photos and video on his IPad. Once all the eggs are laid the turtle refills the nest with sand and tries to disguise the surface so as not to attract predators. Then it’s another long drag down across the beach to the water.


In the case of our turtle, she had laid her clutch of eggs slightly below the high water mark so the rangers elected to dig them out and relocate the lot to a new hole higher in the dunes. Members of the group were invited to help carry the eggs and of course Kristian was one of the first in line.

It was quite a late night by the time we returned to the boat and we were all more than ready to hit the sack, particularly with another early start waiting for us in the morning. Witnessing such an amazing piece of the cycle of life had been more than worth any lost sleep though. It was amazing.