Magical Lady Musgrave Island - One more 'must go' ticked off the bucket list.


The next stop on our wanderings southward was to be Lady Musgrave Island. This was a destination we had been wanting to get to for quite some time but previously, whenever we were anywhere nearby, the weather was never right. Now though, things couldn’t have been more perfect.


We were able to raise the anchor reasonably early at Fitzroy Reef and make our way out through the narrow entrance just after low water slack before there was much current running. Even at the lowest tide there is always adequate depth in the channel. You just need to be careful that the strong tidal run doesn’t push your boat into the steep coral sides bordering the entrance. That’s why we always time our entry and exits around slack tide.


The 25 mile run south past a number of reefs and coral cays was uneventful as the modest north easterly breeze comfortably pushed Our Dreamtime along. We were lining up the entrance into the lagoon at Lady Musgrave before long at all. The great thing about Lady Musgrave reef is that you can enter the lagoon via a straight and wide deep water channel. There has been some conjecture whether the channel into the lagoon is a naturally occurring phenomenon, or was cut into the lagoon by Japanese or Taiwanese fisherman, or as legend has it was widened by guano miners many years ago; it is recorded by 1938 surveys. A report from early guano miners of the late 1800s describes the channel thus ‘having a narrow deep-water entrance, enabling small vessels to enter or leave at any time of the tide. Being narrow it is somewhat difficult to locate.’ This would suggest the current broad channel is the result of widening at some stage by persons unknown since then.


Once through the entrance, a keen eye must be maintained from the bow as there is no shortage of coral bommies lurking under the surface of the thankfully very clear water. We anchored in the western end of the lagoon, not too far from the island itself.


First order of business was to lower the dinghy and head ashore for some exploration. What a treat. First we followed a path right through the centre of the island to the western side. The vegetation and bird life on Lady Musgrave is incredible. Lady Musgrave Island is has an amazing enchanted Forrest of Pisonia Trees which White Capped Tern's nest in abundance. The forest however does come under attack from high tides. So beautifully weathered driftwood are a very distinctive feature of the beach. 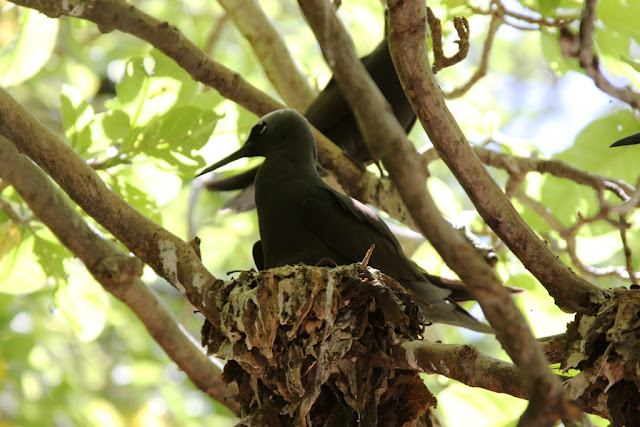 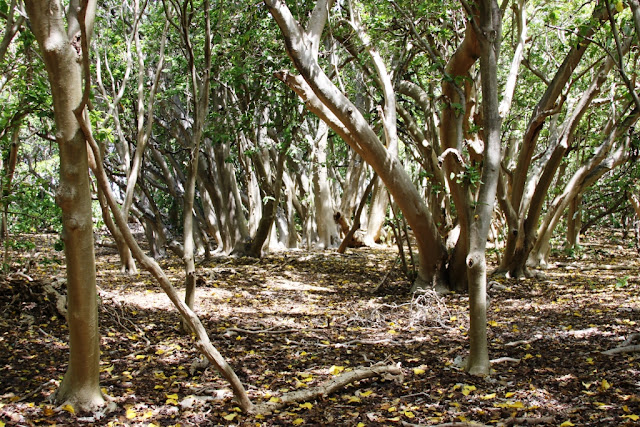 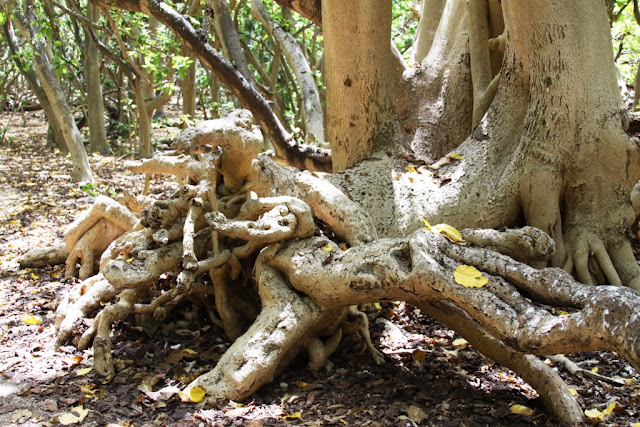 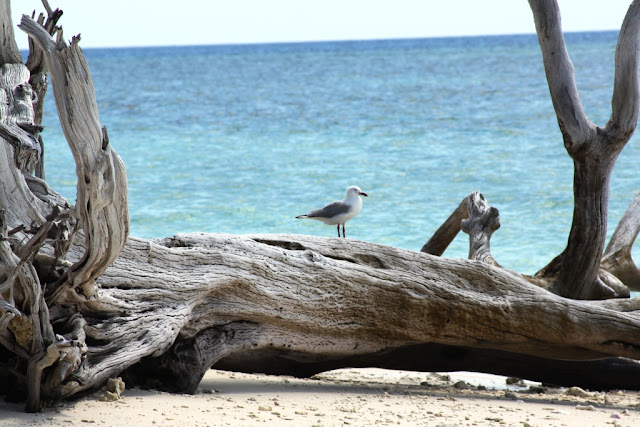 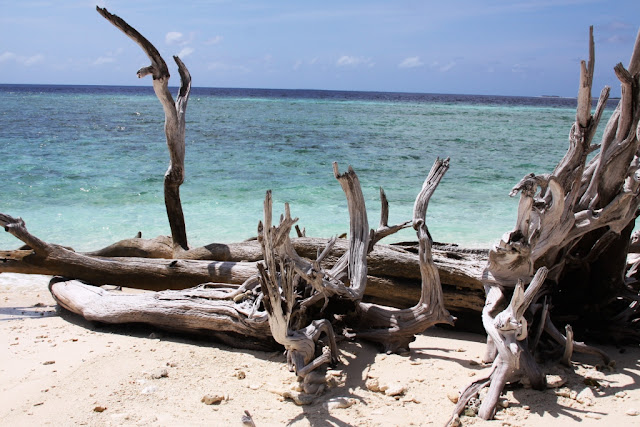 We then followed the shoreline right around the southern end and back to where we began. December is turtle nesting time and an almost endless procession of the graceful creatures swam by very close to shore in the shallow water lapping the sand. The beach was striped with tracks across the sand left by turtles that had made the slow and painful journey up to the dunes to lay their eggs over preceding nights. 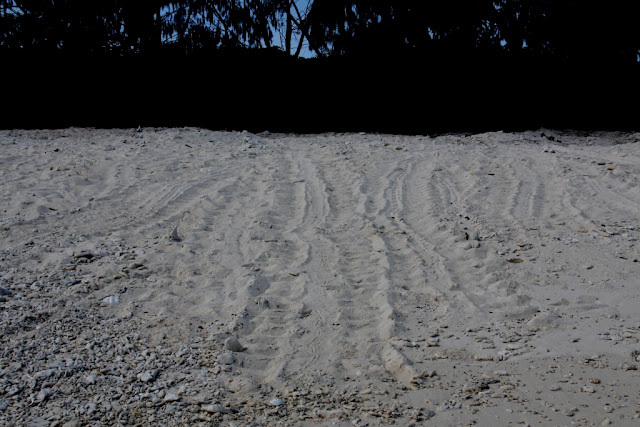 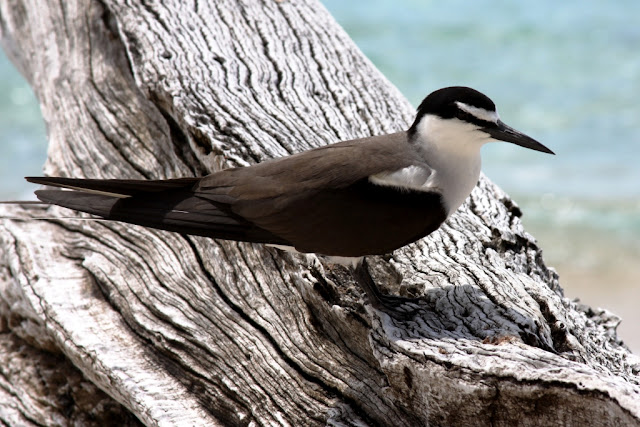 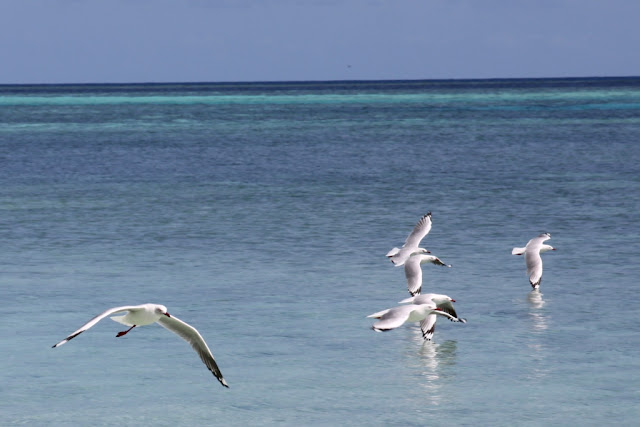 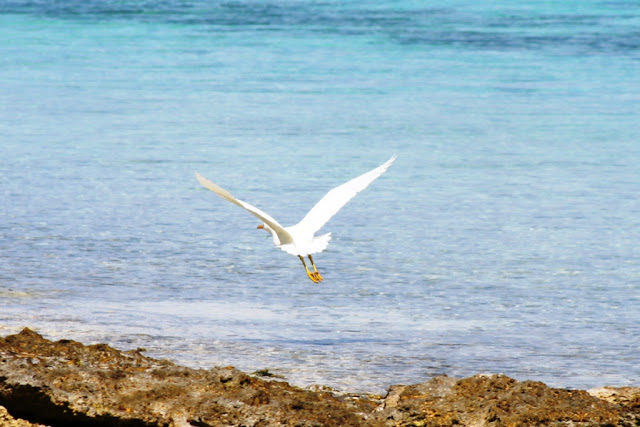 We were also amazed to discover a school of over twenty reef sharks circling continuously in a small area in only about a metre of water very close to shore. 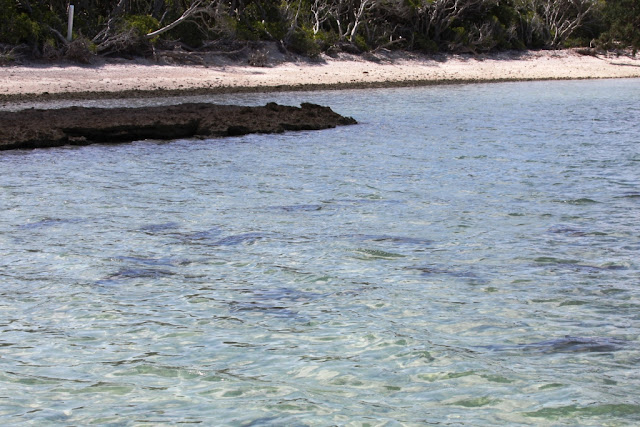 After returning to the boat we donned our snorkelling gear and had a great time checking out an area of reef about forty meters behind our stern. 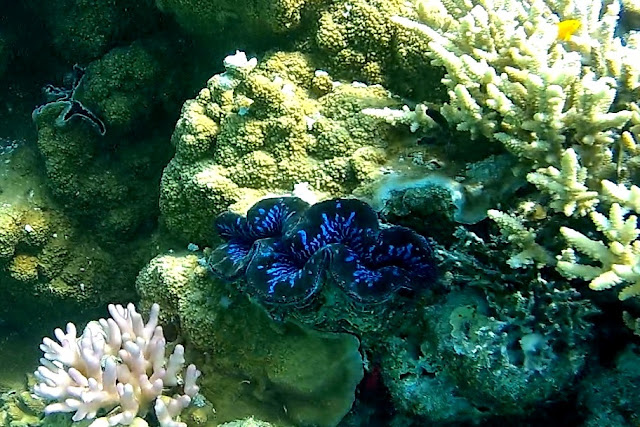 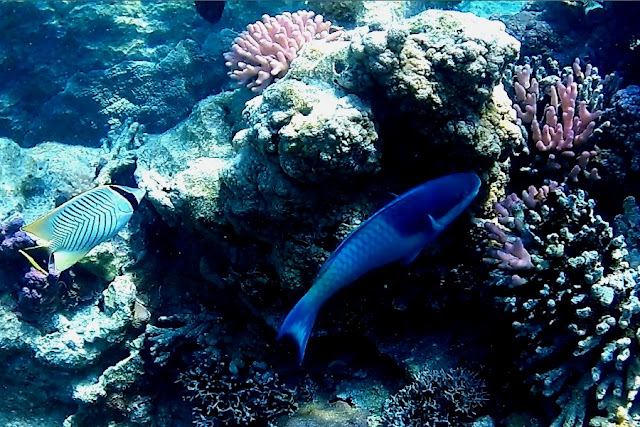 After a very full day we settled in on the aft deck for a light dinner of barbecued reef fish and a couple of white wines as Lady Musgrave turned on a truly stunning sunset. 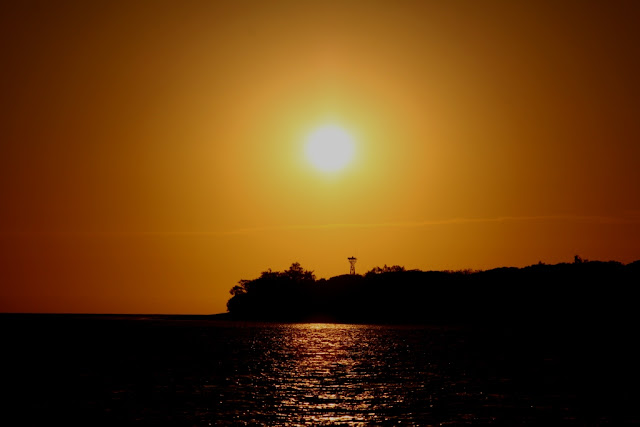 Our second day at Lady Musgrave was very similar to the first. This time however it was just Admiral Nanny and Master Kristian that went ashore as Rob took the opportunity to stay on board for a morning at the key board blogging. Karen had plans of gently drifting in the currents with our action camera where the turtles had been the previous to get some good video footage of them as they swam by. Unfortunately trying to get an eight year old to float quietly was to be an ask. She described Kristian as being like an underwater threshing machine as he darted all over the place chasing anything that moved. Strangely enough no turtles ventures anywhere near.


He may be a relative novice at this snorkelling caper but he certainly does not lack confidence. At one stage a two metre reef shark swam by Karen’s side and when she pointed it out to Kristian, he took off after it like a torpedo. Karen reached out to stop him and was left holding just one of his swim fins in her hand as he disappeared in a boiling wake of water. Clearly the shark was more afraid of him than he of it and wisely made itself scarce at high speed.


We were all back in the water after lunch checking out an area of reef by a large tourist pontoon no longer in use. This part of the lagoon is green zone with no fishing etc permitted. Clearly someone told the fish that this was a safe spot because they were there in droves. We also took some banana for Kristian to hand feed them which proved a hit for all concerned. 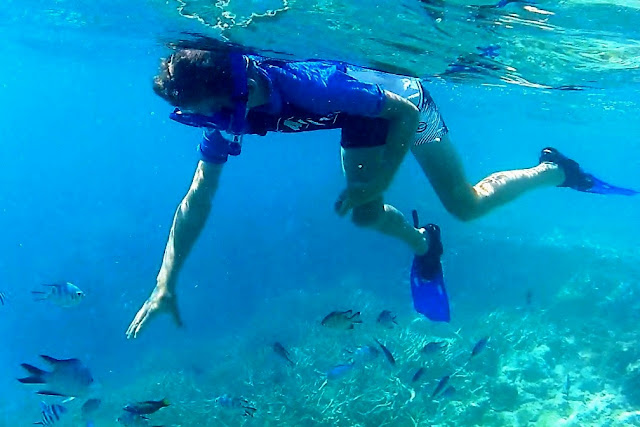 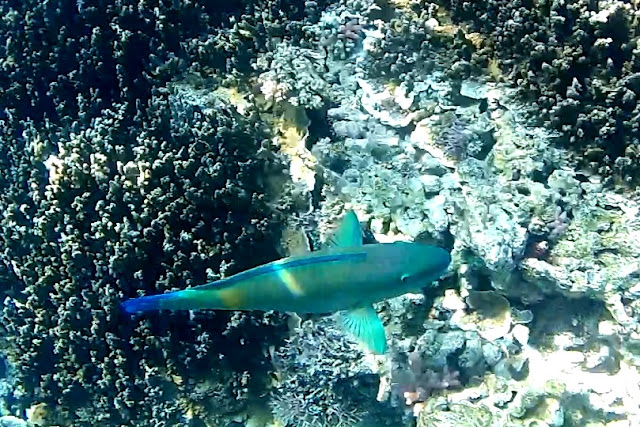 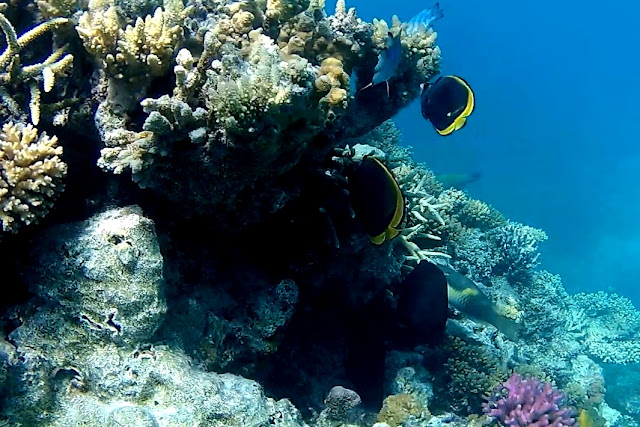 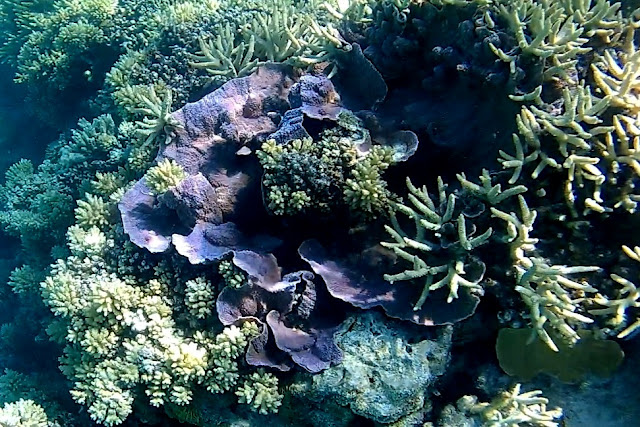 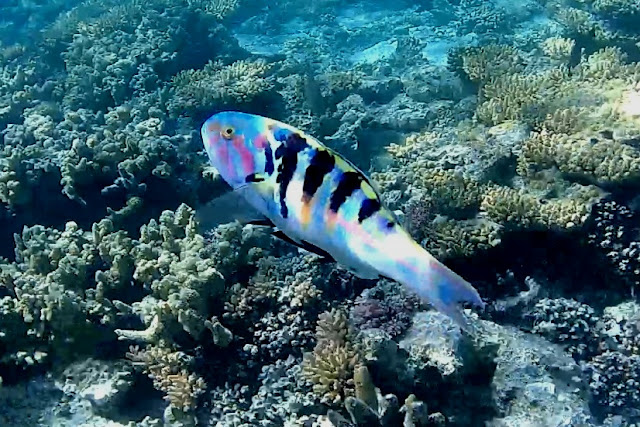 Lady Musgrave Island is truly magical and somewhere we will definitely return. Our day and a half in this tropical paradise was too short by a long, long way but Christmas was approaching. We felt we probably should make sure we reached Brisbane and return a grandson to his mother before then.
We could not have believed that the previous night’s sunset could be surpassed but that’s exactly what happened. 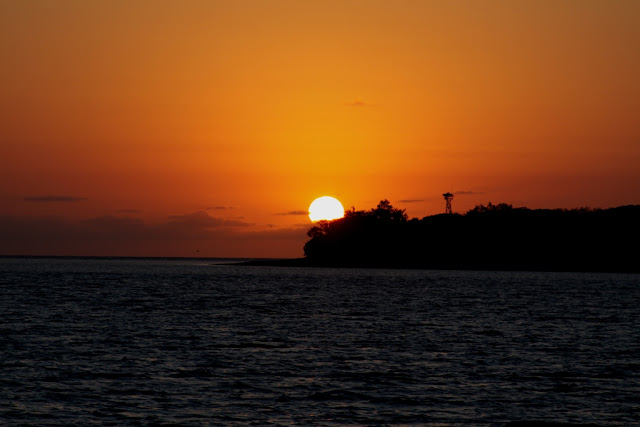 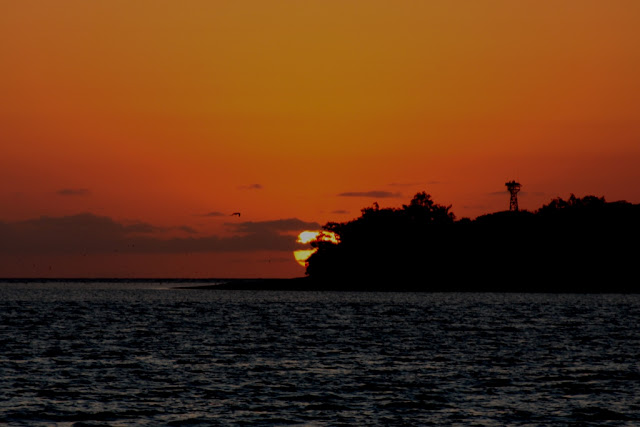