Three meerkats back sailing together again.

November 11-12, 2015
It was now time for our stay in Abbel Point to come to end and after topping up fuel, water, fresh food and wine supplies, we cast off and set sail for Stonehaven on Hook Island. It was fantastic to be sailing with Marc again.


We first met Marc when the three of us crewed aboard the Bennetau 57 Nae Hassle from Cairns around to Darwin then beyond on the Sail Indonesia Rally of 2011. We shared awesome adventures travelling together all the way to Thailand, the full story of which is told in our book, Stuff it. Let's go sailing anyway!

Below is an extract from the book which explains how we crewmates became the three meerkats.


“On the domestic front the crew’s relationship with the owners could have best been described as strained. Not even sourcing a feed of fresh lobster generated as much as a thank you from Milan while at least Colin acknowledged how well Karen had cooked and served our tasty treat.
On Nae Hassle the master cabin is located in the stern, just below the cockpit. Colin and Milin regularly headed to bed early in the evenings rather than engage in conversation with we underlings. We were expected to follow suit rather than make noise in the cockpit and disturb them. As a result we three crew dutifully locked up the companion way and retired to our cabins, sort of.  Karen and I occupied the port side cabin in the bow while Marc had the starboard. Being a big 57 footer, both were very comfortable and much larger than you would usually find on a yacht. Both also had a large hatch in the roof to reach the deck above.
Envisage if you can the sight of a head emerging from a hole in the yacht’s foredeck. It timidly rotates through 360 degrees, nervously scanning the surroundings for any danger in sight before being followed shortly after by another doing the same on the other side of the boat. Said heads then disappear rapidly below. Satisfied no evil owners are waiting to pounce, three bodies then scurry out through the holes and emerge on deck with a bottle of wine or two, plastic cups and, sometimes, even some nibbles.  Envisage this and you will understand why we nicknamed the bow ‘Meerkat Manor’.
By this stage of the trip we three meerkats emerged from our burrows most evenings and spent many very pleasant hours discussing philosophy, bitching about our owners and solving the woes of the world while enjoying a drink and the tropical evenings under a sky full of brilliant stars. If only we could remember next morning all the solutions we came up with the night before and sometimes re-entering the burrow after one too many was not as controlled as the exit. It’s amazing how much noise a person can make when instead of dropping onto the edge of the bunk they miss and land as a tangle of arms and legs on the deck with a loud thud and uncontrolled giggles. What happens at Meerkat Manor stays at Meerkat Manor so no names.
The constant challenge of keeping up Meerkat Manor’s wine supply evolved into a great game. Despite the fact that Karen and I had actually bought and paid for the 180 bottles of wine that we had loaded onboard in Australia, Colin and Milin regarded them to be now ‘Ships stores’ and their property. As such they were tightly rationed with a glass or possibly two with dinner the norm. The bottles were all wrapped in newspaper and secured in hidey holes under the decks all over the boat. With great delight we took every opportunity to relocate bottles from the deepest recesses to our cabins while leaving the front rows in place. Karen was particularly adept at mounting successful raids while below alone on her perpetual galley duties and Marc would of return to his cabin to find the ‘Wine Fairy’ had deposited a bottle under his pillow.”


We reconnected with Marc in London in mid 2012 and embarked on a joint venture which saw us sailing the Jeanneu 43DS Alcheringa around the Mediterranean together for two seasons.


Now another two years on we were reunited under sail again. This time for the trip back down the Queensland coast to Brisbane.
We enjoyed a gentle, light airs sail across to Stonehaven where we again picked up one of the well maintained moorings provided there to protect the coral bottom.


Once the boat was all secured we fired up the BBQ for a fine meal, drinks and hours more catch up chat sitting out on the stern watching the sunset then marvelling at the millions of stars that are only visible when you get well away from big town lights.

The next morning one of Air Whitsunday’s float planes landed nearby and taxied close by us to pick passengers up from the charter yacht moored beside. They were off on an hour flight over the islands and outer reef while the co-pilot was left with dinghy minding duties. We called him over to the boat with the offer of a coffee while he was waiting and had a great old chat. 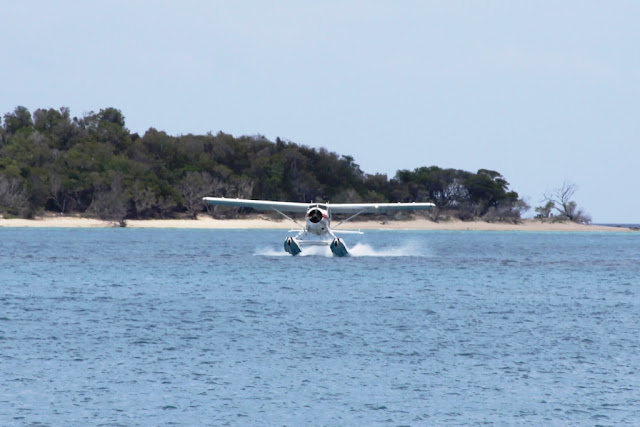 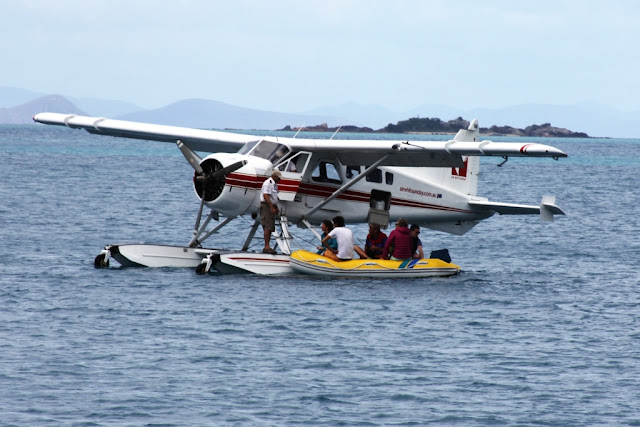 Once our unexpected guest departed, we dropped the mooring and motored the very short distance over to show Marc Langford Reef and it’s sand cay that emerges at low tide. We didn’t stay long but were able to hand feed a school of huge fish that circled the stern competing for the next morsel. 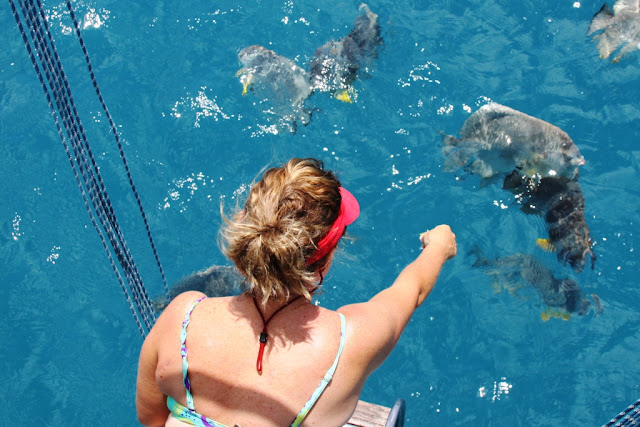 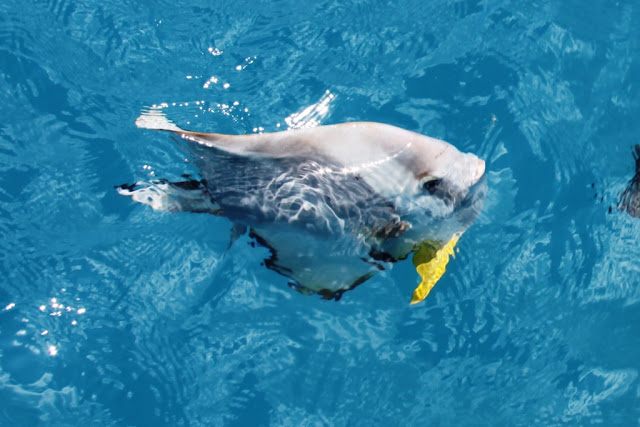 Next it was around to the northern side of Hook Island and into the delightful anchorage at Butterfly Bay where we picked up the mooring ball closest into the shore and fringing coral reef.


We had a fantastic snorkel in the clear waters surrounded by fish of all sizes and colours and masses of beautiful coral. Butterfly Bay really is one of the best snorkelling spots in the whole Whitsunday Islands. It is also extremely well protected from the prevailing south easterly winds. Not that it was much of a concern for us this time as the breeze had not reached double figures all day and dropped out completely ensuring a very peaceful night’s sleep for the three tired meerkats onboard.
We love to receive comments on our blog from readers. If you do leave a comment and you also have a blog, please leave a link as well. We'd like to click over for a visit and leave you a comment too.