The Paradise that is Australia's Great Barrier Reef


When the weather presents an opportunity you take it. The forecast indicated we were going to be in for a some very mild northerly breezes which would be perfect for a trip to the outer Great Barrier reef. We were up early and dropped our mooring in Butterfly Bay on Hook Island’s northern coast and got underway for Bait Reef twenty miles distant.

There was no chance of sailing in the almost non-existent breeze so it was going to be a morning of motoring. Our course took us straight across the main shipping lane which is used by many container ships and bulk carriers full of coal headed for Japan, China, India and beyond but in our case we had a clear run across.


We then settled in for a boring few hours as the 80hp diesel pushed us a long with Ben and Gerry (our B&G autopilot) steering the boat. The monotony was broken momentarily when we passed by a huge sea snake lazing on the surface which unfortunately disappeared into the depths before we could get a photo.


Then Rob spotted a flash of silver as what looked like a good sized fish took the lure on our trailing line. Then it was game on as what revealed itself to be a very large Wahoo vigorously  resisted our attempts to haul it in. Rob did manage to get it to the stern and Karen quickly hooked the gaff through its gill but then found it too heavy to lift up and over the safety rail. Rob couldn’t help as he was keeping tension on the line to keep the hook set in case the fish fell back into the water. Marc was standing on the stern, holding  the landing net  frozen into inaction by the sight before him. The net was patently useless given the size of our catch anyway but Rob’s loud urging finally broke the spell and Marc came to Karen’s aid on the gaff. Together they lifted the struggling monster out of the water up level with the pushpit safety rail where it hung with its tail thrashing the water for what seemed an eternity before a final effort saw the fish hauled over onto the stern deck.


It may have been landed but was still not going to give up without more fight. A good shot of straight rum poured into its gills had a miraculous calming effect on our Wahoo before Karen’s deft work with a sharp knife cutting it through the gills ended the struggle. The fish measured just on 1.5 metres and at 50kg (110 lbs) was the biggest we have ever caught since we began cruising. Clearly our trip to the outer reef was no longer boring.

Karen gutted and carefully bled the wahoo as we approached our destination at Bait Reef then we left it with a wet towel over it to keep it cool. The job of slicing it up and bagging the fillets for the freezer would have to wait until we were secured inside the coral lagoon.


We approached Bait Reef’s western side and carefully picked our way through the entrance between a string of coral pinnacles known as The Stepping Stones.  Each of these 18 or so circular pinnacles rises straight up from between 15 to 25 metres to less than a metre from the surface.  They have absolutely vertical sides covered in coral of all varieties and are surrounded by swarms of colourful fish of all shapes and sizes making this an outstanding dive and snorkelling spot.


Once through the entrance we picked up one of the public mooring that are rated for monohulls to 20 metres or catamarans to 18. Like all the public moorings in the Whitsunday region, they are regularly checked and well maintained. We have no qualms at all about trusting Our Dreamtime to them.  The outer reef is out of bounds to the huge fleet of bareboat charter yachts, catamarans and motorboats that operate in the Whitsundays so things are definitely a lot quieter than back amongst the islands. We were the only boat in the place and while the solitude was fantastic, it was a little surreal to be sitting on a mooring totally out of sight of land with nothing but blue water visible all the way 360 degrees around us. Marc commented it reminded him of the Nicole Kidman movie, Dead Calm and he was hoping a mad Billy Zane wouldn’t suddenly appear in a dinghy.


Once we were settled in, Karen went to work on filleting the Wahoo.  As any piece of offcut went over the side the water around the stern boiled with large fish racing to get their portion of the free lunch we were providing . We soon had some huge turrum and a couple of small reef sharks camped under our hull waiting for the next morsel.


As we’d provisioned the boat only a few days previously, it didn’t take long before we couldn’t fit another ziplock bag of fillets in the freezer and even the fridge was at its limit. Five nice pieces were earmarked to go straight on the BBQ for lunch so that provided a partial solution. In a very timely arrival, a large catamaran entered the lagoon and picked up a mooring not too far from us. It was their lucky day as Rob zoomed over in the dinghy with the last eight or ten fillets we couldn’t fit anywhere. The gratefully accepted our offering of fresh wahoo. Their skipper then asked. ‘Would you like some potatos?’ It seemed like a strange question until he explained they had done an online grocery order before leaving Abell Point and had ticked ‘3’ in the ‘Large Potatoes’ box expecting to receive three large potatoes in their order. When the delivery arrived at the marina it included three large bags of potatoes. Hence Rob returned with five kilos of potatoes to add to our ship’s stores. Then it was time cook. 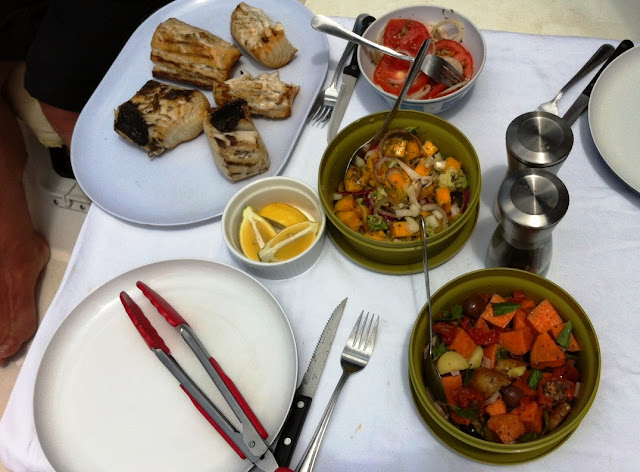 After our outstanding lunch of our fresh wahoo we couldn’t wait to don our snorkelling gear and explore the reef. We quickly discovered Bait Reef is very healthy with an abundant range of soft, hard and plate corals. The teeming schools of every imaginable coral fish bore testament to the fact no fishing is permitted here at all. Unfortunately the back of our el cheapo underwater camera came unfastened so it died a very inglorious death. Rob was extremely frustrated at not being able capture the sights for the blog but will never forget what we saw. It was the best snorkelling we’d experienced for many, many years.

We carry a scuba kit on board and Rob would have loved to have dived the Stepping Stones and half  hoped he might find someone to buddy up with but unfortunately neither of the by now two other boats in the lagoon were into diving. So the tank stayed strapped to the rail as diving solo is too risky and Rob doesn’t entertain the idea unless it’s just a matter of cleaning the hull, clearing a fouled anchor or other similar, short, shallow exercises.


Regardless, other than The Stepping Stones, most of the reef is quite shallow, particularly at low tide and there’s very little missed by snorkelling rather than diving. We spent hours floating along with the current taking as much of it in as we could.

That evening the sunset over the water was stunning and later into the night we were treated to the most magnificent sky full of stars you could ever imagine. So many more become visible once you leave the light pollution of land behind.


We have loved our many stops at various islands of the Great Barrier Reef, but tour stay at Bait Reef topped the lot. It may be the first time we have taken Our Dreamtime to the outer reef but it certainly won’t be the last.