A nice visit by the classic schooner South Passage and an awful job done.


It’s been a quiet time on Our Dreamtime over the last few days as we waited to get our leaking transmission out and away for repair.  After doing our research we opted not to attempt the job ourselves. The transmission is located in an extremely awkward position under the deck and removing it involves disconnecting the drive shaft, unbolting the engine and moving it forward, unbolting the trans from the engine and then trying to wrangle about 65 kilos of cast iron gearbox over the top of the motor, out of the engine room, up into the cockpit then off the boat and away.


Skills needed include extreme flexibility of limb, great strength and a methodical approach executed with calm and patience. In other words it was probably more than our otherwise rock solid 30 year marriage was likely to survive. The other risk was that if we tried to do it ourselves, there was every chance Rob would be arrested for excessive swearing and cursing long before the task was completed. As a result we arranged for Gary from Marine Torque here in the marina to perform the extraction at his earliest availability which was September 1.


In the meantime, books were read, blogs written and odd jobs completed around the boat. We also had a pleasant visit on the dock beside us by the training vessel South Passage making an overnight stop to exchange one crew of high school students for the next bunch of adventure seekers. South Passage is a 30 metre gaff rigged schooner that has provided an old school sailing experience to over 40,000 teenagers during her career. The only winch on board is the windlass. 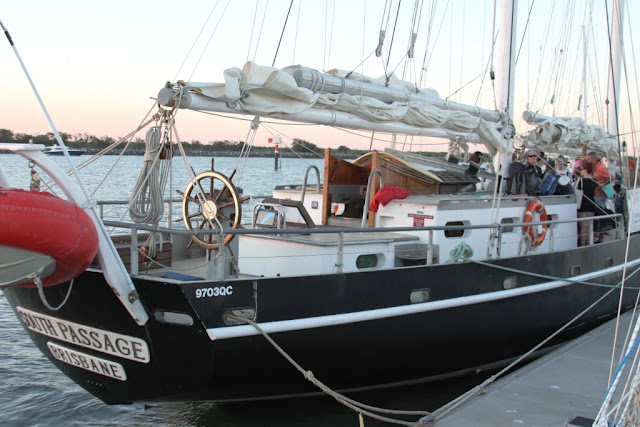 On voyages, the students run the ship under the guidance of watch leaders and qualified crew. They are organised in three watches named Red, White and Blue usually with between 6 and 8 students in a watch. They will be rostered for periods of two to four hours and will be in charge of the ship. Each watch works as a team. They bunk together, eat together and run the ship together when they are on duty. Of course, there are times when it is all hands on deck with all watches involved.

We really enjoyed chatting with her crew about the boat and their experiences with the kids. It was also great to witness the excitement of the twenty or so young guys and girls coming aboard for their four day passage via Fraser and Moreton Island down to Brisbane. It was a pleasure handling their lines and seeing them on their way the following morning. She provided an impressive sight making her way down river towards the sea. 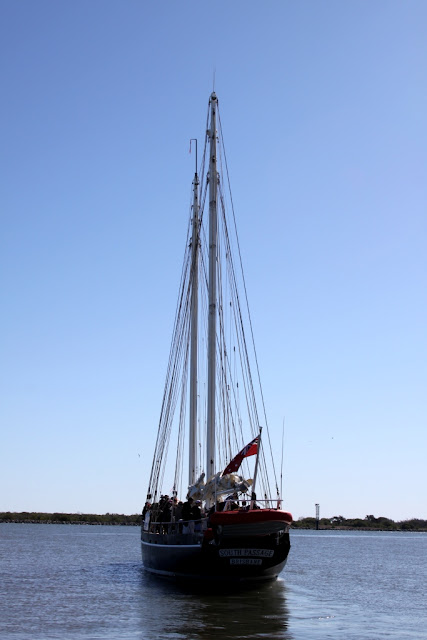 Then it was onto the lovely job of removing the transmission from the boat. With Rob hovering as a trades assistant, Gary got to work unbolting engine mounts and other ancillary items to create an escape route for the trans. It was clearly quite a while since it had last been separated from the engine and fought back all the way but with the judicious use of a power impact wrench Gary had the upper hand in the slow and painstaking  battle.  With the engine slid forward to create  room,  the last of the bolts were ready to remove  after three hours work.

Now the fun began. Supporting the 65kg weight of the transmission, while turning it sideways in a space ill suited to the task was interesting enough, but getting it up and over the engine was the real challenge. After much wriggling, twisting, heaving, huffing and grunting in a number of unsuccessful attempts, Gary’s incredible calm was fractured for a moment as he suggested that “Those #@^&*s who build these boats should have to come and pull these *^%#&@ing things out themselves to see how hard it is. *^%#&@ing bastards.”


Fortunately his stoicism quickly returned and we found we could get the engine an inch or so further forward which made all the difference. A few minutes later the heavy lump was out of the engine room and resting on a thick rag on the salon floor. We were then presented with the next challenge. On a Whitby, it’s over 1.6 metres or almost 5 ½ feet from the deck straight up and out into the cockpit. When you’re talking about 65kg (140lb) that’s a serious lift.


We stood staring at the task ahead in silence for a moment before Rob came up with a solution. We were able to hang a block off the boom, secure a line down onto the transmission which we ran back to the sheet winch. It was then just a matter of Gary guiding it up and through the companion way while Rob winched it up. The last challenge was passing it off the boat to the dock without dropping the damned thing in the water.

The good news is there was no splash and the transmission is now on its way to Brisbane for complete overhaul. It should return in a week to ten days for re-installation then we can resume our odyssey north to the Great Barrier Reef.


In the meantime we’ll just have to kick back and enjoy ourselves here. Sundowners anyone?