After a fantastic stop in Barcelona we were set to finally leave the Spanish mainland and make the 140 nautical mile crossing to the island of Menorca on Tuesday May 7. Well we thought we were set. As we were making final preparation to cast off we discovered a slow leak we’d been suffering from our water heater tank was now more like a small torrent filling our bilge with wet stuff. There was no option but to delay our departure and effect immediate repairs. 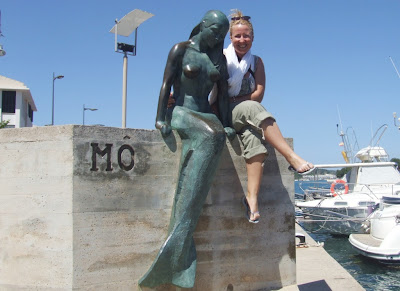 In a piece of ludicrous design, the heating element fits in the side of the tank rather than the top as is usual on domestic hot water systems. The tank is also positioned in a very tight space under one of the salon seats so you need to be a contortionist to reach the element fitting on the tank’s far side and then work on it almost entirely by feel alone.

We’d had a new heater element fitted back in Gibraltar to replace the burnt out one that had begun leaking on our way west along the Spanish coast. We thought paying someone who ‘knew what he was doing’ was wiser than blundering on ourselves but we did watch on closely to see how it was done for future reference. Unfortunately by the time we reached Estepona on the return trip we discovered water was leaking again very, slowly from around the element. Marc had brought a new replacement with him back from the UK and while in Barcelona we had swapped them over but, as it now appeared, not with great success.

﻿
﻿
A fellow Aussie cruiser we’d met in the marina happened to be a plumber and with the leak reappearing in an even more dramatic fashion he recommended that rather than trying to work on it in its very confined space, we take the tank completely out and find the cause of the problem once and for all. Forty-five minutes later the recalcitrant boiler was sitting on the dock. It transpired that the element had been cross threaded back in Gibraltar. The replacement we had put in had simply followed the crossed thread and not seated well enough to seal when under pressure. Now with easy access to the fitting we were able to clean up the thread and properly fit the element.  The tank went back in place and by mid afternoon everything was ready to test. We were disappointed to discover a very slow weep of water still appearing down the tank’s side but fortunately it was not enough to delay our departure any further . A permanent, 100% solution would have to wait.

The following morning we cast off early, made a stop at the fuel dock to top off our tank before clearing the harbour breakwaters just after 9.00am. The weather forecast indicated we’d be right in the middle of a massive high pressure system with no wind at all for our entire crossing and that’s exactly what transpired.

﻿
We motored across glassy seas all day and into the night alternating on three hour watches. Our boredom was broken by an almost constant parade of marine life in strong contrast to most our experience in the Mediterranean. In almost twelve months of trying we’ve caught one fish and now generally consider the Med a marine desert, almost devoid of life as a result of centuries of over fishing.

﻿
However on this day we motored through a school of large tuna chopping their way through bait fish within an hour of leaving Barcelona. Unfortunately they were not interested in our lure though so our fishing drought continued. We were also entertained by scores of sunfish basking on the surface with their fins protruding above the water.

﻿
Next a school of dolphins paid us a visit and played briefly around the bows before disappearing into the distance. A couple of hours later we were surprised to spot a humpback whale crossing our course half a mile or so ahead of us. We’d seen two of pods of whales early last year while crewing on Moksha but this close encounter was still very much unexpected and had us all on a high. No sooner had we got over our humpback surprise than we were stunned to see a large pod of Orca surface off our port beam with their distinctive high dorsal fins arcing through the air. It was amazing to watch them speeding through the water seemingly on a mission and totally disinterested in our presence. It was only midafternoon but we’d seen more sea life in a day than we’d witnessed in the past year and began to wonder what on earth could be next on mother nature’s agenda.
We didn’t have to wait too long as a small bird flew across the cockpit closely past Karen’s ear, down through the companionway and settled on the couch in the salon. We were now around 60 miles (110 kilometres) from shore yet here was a land bird hitch hiking on our boat. Rob put some water in a saucer for our wayward little friend as it was clearly exhausted and not even able to stand. Expecting he/she to take quite a while to recover some strength,  we all stayed on deck so as not to scare it but within fifteen minutes or so it flew up into the cockpit and perched on the table beside us. We thought it had decided to join our crew for a while but soon took off again to resume its journey. We hope it made landfall safely but have our doubts.

After an uneventful night Rob was treated to a spectacular sunrise on his 3.00 to 6.00am watch as we made our way down the east coast of Menorca towards our destination at Mahon.

﻿
﻿
Entering through the heads and passing the fortresses into the harbour at Mahon was spectacular. Lord Nelson described this as the best natural harbour in all of the Mediterranean if not the world. It is pretty good but Nelson never saw Sydney Harbour so he can be forgiven for his mistake.

﻿
﻿﻿
We had emailed ahead from Barcelona to Marina Mahon to book a berth and now ambled slowly around the harbour as we spent twenty minutes trying to raise them on the radio for instructions as to where to go. We finally gave up and rang their phone number and were told their mariners would call us on the radio in five minutes. Ten minutes later with still no radio call we were passing the town wall when we spotted a guy on the dock signalling us to moor stern to right there. We figured we were being high-jacked by an opposition marina but quite frankly didn’t care by this stage. Minutes later we were securely berthed in a fantastic spot right in the centre of things.

﻿
We quickly learned our dockside helper was Alberto of Sunseeker Moorings who not only ably assisted with our lines but proved to be very welcoming and a mine of information. We were very pleased he had spotted us and stolen our business. (Our marina review will be in the next post) Marina Mahon never did radio us back.

The view around the harbour from Alcheringa was breath taking and we were just metres from shops, great cafes and restaurants. We squared everything away, washed the boat down, enjoyed a good hot shower and then headed into Alberto’s recommended establishment for a menu del deia (Menu of the day) for lunch and a well deserved post passage drink.