Just the two of us, Spanish Coast hopping.

April 19 - 21, 2013
Marc threw his duffle bag on the dock and followed it ready for his trip back to the UK. He then slipped the lines for us and waved us off as we motored Alcheringa out of the marina in Alicante’s huge harbour  bound for Barcelona via a number of short hops along the Spanish Coast.


﻿
Our first stop was going to be the delightful bay at Calpe to anchor below the huge rock headland responsible for its name. We’d been here previously, both with Moksha and Alcheringa and very much like the place. You can read about those visits at Calpe with Moksha
On this visit we wouldn’t have time to explore more of Calpe as it would only be an overnight anchorage for us. We were blessed with clear blue sky and warm sunshine as we left Alicante. The wind was very light from astern making conditions on deck glorious but ruling out any chance of sailing so the motor stayed on.
As the morning air lost its chill we began shedding layers of sailing gear. After the long winter we were finally able to enjoy a bit of sunbaking on the very leisurely run along the coast, around the headlands and past the infamous resort town of Benidorm before rounding Punta del Albir under its magnificent lighthouse.
﻿


Looking ahead across the wide bay to the high rock and anchorage at Calpe, we spotted a very distinct line in the water coming our way. The predicted 10 knot northerly wind change was advancing towards us as an invisible wall. It would be cool air off the snowy alps so we pulled on long sailing pants and reached for the jackets thinking we’d done well to be ready for it. Ha!
﻿

Those weather gurus got us again. Rather than the predicted 10 knots we charged headlong into a constant 25+ knot headwind which regularly threw in gusts well over 30 knots just for good measure. And, it wasn’t cool air, it was bloody freezing. What a contrast to our previous five hours of sun loving.
Punching into the short, sharp chop and strong headwind dropped the boat’s speed from just over five knots to under three almost instantly. After droning into it for about thirty minutes we decided to hell with the fuel economy and the revs went up from 1,800 to 2,200 which put us back up over four knots and had us approaching the beach about forty-five minutes later.  While the wind was still blowing, it was directly offshore and the buildings lining the beaches provided good protection dropping the breeze to a steady 15 knots. We were able to anchor quite close inshore in three and half metres of very clam water.  We shared a bottle of nice Spanish Cava (Bubbles) with dinner and turned in for a very nice night’s sleep. 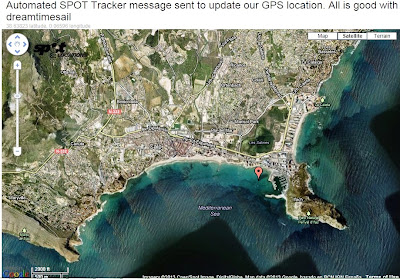 We had hopes of being able to sail the next leg, even if it was going to be upwind. The weather gurus were predicting a 15 knot northerly, but we’re a bit cynical about their abilities by now. We decided to head out from the shelter of our anchorage with a reefed down mainsail in case their 15 knots was like the 10 they predicted the previous day.
﻿

This time they were closer to the mark with the strength but still a bit wayward with direction. Instead of northerly it was more north-easterly, the direction we needed to go before rounding Cabo de la Nao and turning to the north-west. However we did try to sail.

We headed up wind and well offshore before turning on the opposite tack and running back in towards the coast. When it was time to tack out again we looked at our progress and quickly decided that at this rate it would take waaaayyyy too long for us to sail upwind if we actually wanted to reach our Cabo de la Nao before nightfall. We could sail when we turned north-west around the point. It was time for the motor to push us along again but at least we were actually headed for our destination.

We rounded the cape to run north-west along the coast all ready to turn the motor off to go sailing and, unbelievably, the wind turned with us. It was still on the nose. Bugger.  We motored the hour or so to Denia and found breaking waves in the area we’d planned to anchor so that was a no go.
﻿

Fortunately we’d selected it as our stop because it also has a large harbour and what turned out to be an excellent marina so we were fairly quickly inside its walls and tied up nice and snug. As it was Rob’s birthday we thought we might as well make the most of our surroundings. After luxuriating in the private, large ensuite type shower and bathroom facilities provided by the marina, we enjoyed a very nice bottle of Carva at a dock front restaurant while we watched the sunset. We followed that great start  by moving inside for another bottle and an absolutely exquisite meal with exceptional service. The Sharme Restaurant Lounge Bar at Denia has our vote for ‘Local of the year’ so far by a wide margin.

For Sunday, April 21, we’d planned a short, 25 nautical mile hop to what look to e a nice anchorage off a beach, sheltered by a headland at Cullera. We woke to not a breath of wind and departed through the long breakwaters of Denia harbour into a very calm Mediterranean sea.

The wind made a weak appearance mid-morning and slowly built but never reached any real force leaving us to motor into the bay at Cullera in the early afternoon. There was a small swell running but we found the boat sitting reasonably at anchor. With the wind forecast to drop out entirely we thought all would be fine. Wrong! Bloody weather gurus. Instead of fading away, the breeze picked up in the late afternoon building the small swell into something far more uncomfortable.
﻿

There was now not enough daylight to reach Valencia and there were really no other anchorage options in between. The anchor was well dug in and the boat was in no danger so we simply sucked it up and decided to ride it out for the night. It wouldn’t have been too bad but about 9.00pm the wind did finally drop but also swung a little resulting in the boat hanging almost beam on to the swell. We rolled like hell all night making sleep almost impossible.
﻿

Such is life. It makes all the glorious days we have on Alcheringa all that much better.
We love to receive comments on our blog from readers. If you do leave a comment and you also have a blog, please leave a link as well. We'd like to click over for a visit and leave you a comment too.