We are sailing earlier in the year than most people do in the Mediterranean so as we make our way East along the Spanish coast we’re doing short stages in whatever breaks the weather provides. Our goal is to be in Barcelona by the end of the month so we have a reasonable amount of flexibility and can shelter when the wind blows up.

After sitting things out for a while tucked up in a delightful anchorage inside the harbour walls at Fuengirola, we got up before dawn for an early start to make our way across the big, wide bay at Malaga. The good news was the big winds we’d been sheltering from had gone away but the bad news was we now had almost no breeze at all. As a result we kept the sails furled and the engine on making our way over the glassy water.

We were joined by small pods of very large dolphins at different stages which is always a lot of fun. They love to play around the bow and when we go up there for a close look they will roll side on to check us out too. We find ourselves staring into each other’s eyes. It’s an awe inspiring experience for us that we hope they enjoy as much as we do. One show off provided extra entertainment by  repeatedly leaping high out of the water doing some very impressive body slams as he/she splashed back down.

We motored until early afternoon when a stronger than expected 15 to 20 knot breeze from the stern quarter sprang up very quickly. By this stage we were only about two and a half hours from our planned anchorage and  elected to run before the wind with just the genoa rather than bother coming about to raise the mainsail. It proved a very worthwhile experiment as we were soon getting along very nicely at near seven knots with the boat riding the building swells very comfortably.


﻿
The wind turned out to be more from the south-west than the predicted westerly so the bay at La Hurradura that we planned to spend the night in wouldn’t provide enough shelter. We sailed on by to our Plan B at a smaller but more protected bay at de Berengueles. We’d selected it because it also provided an inbuilt Plan C in that a small but extremely well protected marina was located behind its Western point. If the conditions proved too rough to anchor out we would be able to duck in there and take a berth for the night.

We arrived in the bay around 3.30pm and anchored in 9 metres of water close to the beach under high cliffs dotted with some very impressive houses. The headland blocked most of the wind reasonably effectively so our intention was to sit for a while and see how much swell was finding its way into the bay. If we decided things were too uncomfortable we’d move over to the marina. While we like to avoid marina fees where possible, we actually prefer being at anchor anyway. It’s much nicer sitting in the cockpit looking at the sea and coastline than being jammed in between other boats tied to a pontoon. 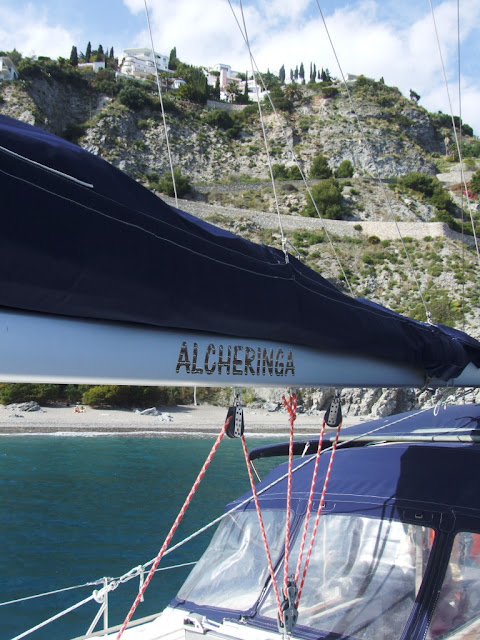 When Alcheringa had her bows facing the small swells we were more than comfortable but as the wind dropped the boat tended to swing beam on and roll enough to be a problem. We dug our spare anchor and chain out of the lazerette and into the dingy. We then paddled in towards the beach at the appropriate angle and deployed it as a stern anchor to keep the boat pointing in the right direction. Problem solved. We were now held into the swells nicely and settled in to reward ourselves with a post passage beer and enjoy our surroundings.

The beach we anchored off is well away from the developed area of the bay and only accessible by foot or boat. In Spain that naturally means it is a beach for naturists. Although we’re not so sure what’s so natural about laying on a beach naked at this time of year with a chilly breeze blowing and water temperature that’s breathtakingly frigid. Karen was particularly bemused by the rather confused gent spread eagled on the sand wearing a long sleeved sweater but naked from the waist down. She was more than a little amazed at the dedication of some people to having a well tanned Willy.

Despite the odd nature of some of our neighbours, with high cliffs behind us, a castle and medieval fortifications  on the point to our East, it was a very pleasant spot to spend the afternoon and night. In stable weather we may have stayed another day and explored a little but we had another front moving in from the Atlantic so we did need to hot foot it into shelter. We spent a week in Almerimar Marina in October on our way to Gibraltar and knew we’d be nice and cosy tucked in between its apartment buildings so it was the perfect bolt hole for the coming blow. 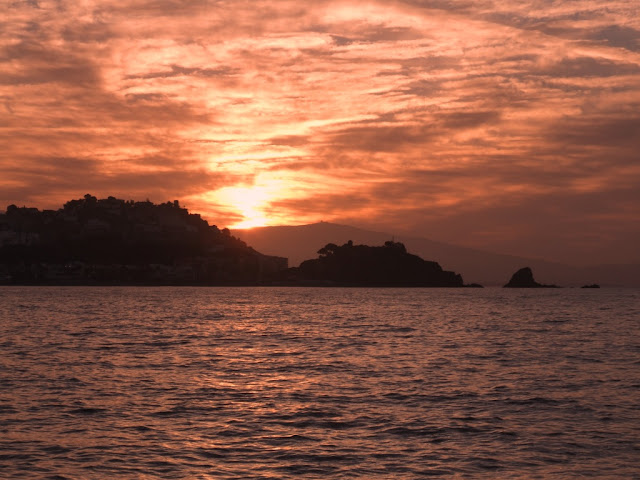 ﻿
The bonus of another early start was getting to witness a very impressive sunrise as we headed out of the bay next morning. We were in the calm before the storm and never looked like getting a sail out all day as we motored our way towards safe haven at Almerimar Marina. If it wasn’t for dodging local fishing boats who appear to take great delight in changing course just to cut in front of yachts, the trip would have been totally boring.  However it was pretty cool looking up at the snow covered mountains of the Sierra Nevada mountains as we cruised by. 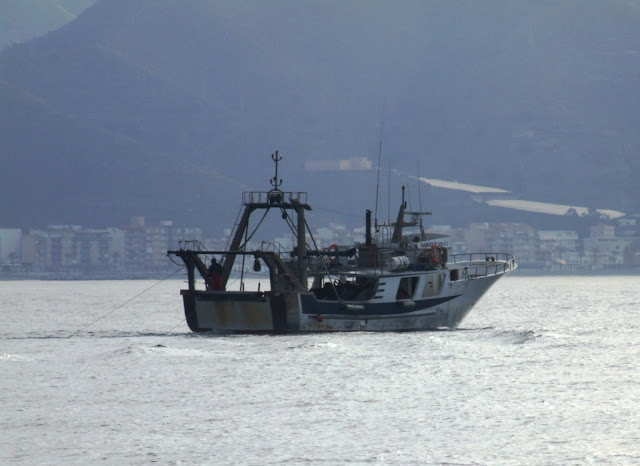 ﻿
With a very strong easterly current helping us along we arrived at Almerimar around 3.00pm, a little earlier than expected, and of course the marina was closed for siesta until four. We tied up at the reception dock, sat, waited and watched the weather come our way. By the time we finally got checked in and headed to our very skinny, stern to berth between two other yachts, the leading edge of the front had arrived and the wind was strong enough to make things interesting to say the least. The cross wind carried the bow away on our first, ‘slow is pro’ attempt so we aborted and got set up for another go.

This time Rob reversed quickly down the marina and flicked hard on the wheel to spin the boat into the skinny gap with plenty of way on to overcome the force of the wind. We went straight in but it is a bit hard on the nerves watching our fibreglass stern speeding at 90 degrees towards a solid stone wall while our fenders squeeze the boats each side apart to make room for us. A timely blast of full ahead prevented catastrophe and, once all lines were on and secured, we all agreed it was time to head straight to Mario’s, our favourite Almerimar haunt, for tapas and a calming ale – or four. Everything else could wait until tomorrow.