Our next stop was Kelibia, another fishing port which was described by the pilot book as having an attractive setting at the base of a tall hill dominated by a medieval fortress with a small harbour offering good protection from most winds but having few amenities for visiting yachts. Arriving late afternoon following a nice sail from Hammermet, Kelibia proved exactly as described. 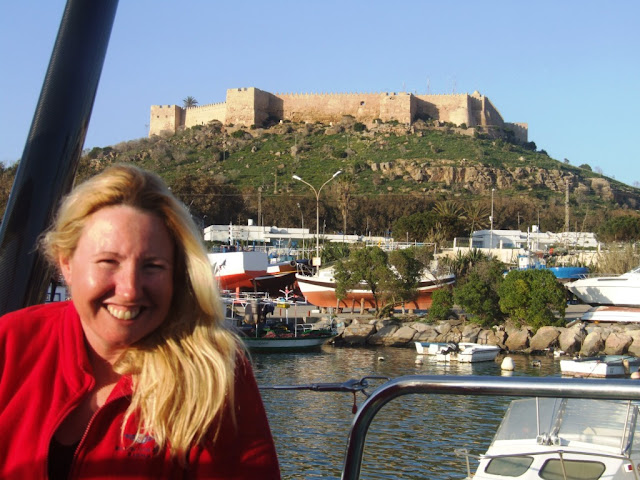 Our first challenge was actually getting a berth. Before leaving Port Yasmine, Tim had contacted the harbour master and been assured there would be no problem but here we were, idling around the tight confines of the harbour with not an unoccupied spot in sight. Eventually the local official appeared signalling that he wanted us to raft three out from the jetty with a largish motorboat and a forty foot yacht inside us. The problem was that with fairly stiff breeze we would have been blown hard up against the smaller yacht almost half our size with most likely some very unhappy results for it and possibly Moksha

Shouting across the water with his best French, Tim was finally able to convince our man that his first suggestion was not possible. He shrugged his shoulders and pointed to what looked a very short space on the other side of the jetty between the two coast guard vessels and a row of small motorboats. We’d still be rafted outside a fishing boat but on this side we’d be blown away from it and the jetty rather than bashing and bumping all night. All we had to do was fit. The chart showed the depth as being marginal for our draft and there was very little wriggle room to manoeuvre.

Due to the strength and on shore direction of the wind, anchoring out off the coast was certainly not an attractive proposition and neither was sailing on overnight and through the next day to the next port unless we absolutely had to. So after spinning the boat around, in we went stern first. With Jayatma keeping a close eye on the depth gauge along with some precise helming and deft use of the bow thruster by Richard all worked perfectly and we soon had lines running all over the place to the fishing boat and jetty to make sure Moksha was nice and secure. All done in time to sit back for a few minutes and enjoy a beautiful sunset before cooking up the evening meal.

One of Tim’s first jobs when we get into a port or marina is to get the boat connected to the world. Richard in particular is totally lost without internet connection. Moksha has a wfi antennae mounted at the top of its very tall mast and in every harbour or marina the strongest wfi signal around the area is found. Usually it’s the service provided by the marina but it can also be a free wfi service offered by a local café or bar. If no wfi signal is available, the alternative is to connect through a local 3G sim card which is bought in each country we visit for the boat’s PC. Once connected everyone on board can log in through the boat's own wfi server. Between all on board we collectively have three i-pads, five lap tops, six smart phones and the boat’s desktop PC that can all log on together. 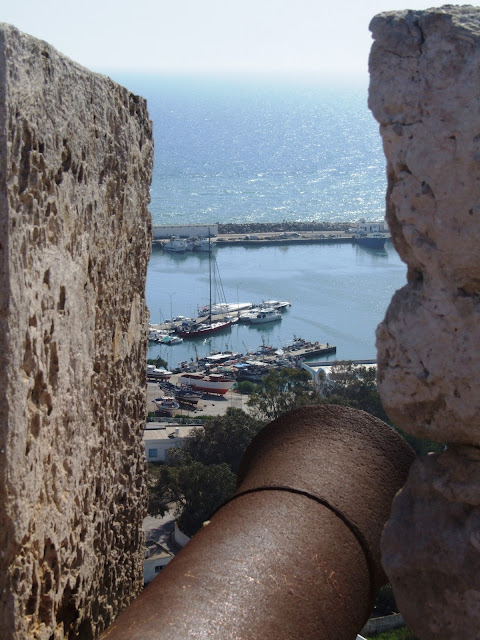 The atmosphere in the harbour with fishermen going about their business and locals coming and going was so much nicer than the big, soulless marina we’d spent the previous night in at Hammermet. Like Mahdia it provided a taste of the real Tunisia far away from the artificially created tourist attractions and westernised menus aimed directly at Europeans we found in so many restaurants. Having said that, after dinner we were assigned the job of visiting a cafe within view of the boat to obtain their wfi password so that Tim could do his thing. The usual deal is you order a coffee, wave your i-phone around ask for the wfi password, drink up and then head back to the boat to get everyone back in touch with the cyberworld. We were a little taken aback to find this , in this quiet little out of the way fishing port, full to overflowing of young locals all in trendy western clothing and all rocking along to the latest music. Apparently it was THE place to go on a Friday night. On receiving the menu we found it consisted almost entirely of a range of gourmet style pizzas and alcohol free mocktails. The younguns were obviously really enjoying themselves despite the complete absence of alcohol. Kelibia is a long way off the regular tourist trails so we started to wonder just how far the western influence has spread through Tunisia.
﻿
﻿
﻿Next morning Moksha got another wash down of all her decks and Richard came up with a number of new items to add to the jobs list that kept us all busy well into the afternoon. He is very keen for us to become intimately knowledgeable about the boat’s systems. Moksha is a four plus million dollar boat and everything about her is at the very cutting edge of technology. For now Rob has been set to learning all the boat’s navigation programs and systems while Karen has been assigned communications. That’s not just the VHS radio but includes the VHF and its pactor modem for weather faxes and sailmail emails, the satellite phones and the internet server and its 3G and wfi systems. The size and complexity of some of the manuals is enough to scramble anyone’s brain very quickly and we’re trying to learn our way in measured stages.

We did finish up in time to head off the boat to enjoy a bit of us time and a superb late lunch and coffee at a local café before climbing up the hill to explore yet another fortress. While the interior was not as well preserved as some others we’d visited, the defensive walls were very impressive as were the spectacular views north along the coast and down onto the harbour. Then it was back to do the dinner and get the boat ready for departure again next morning. 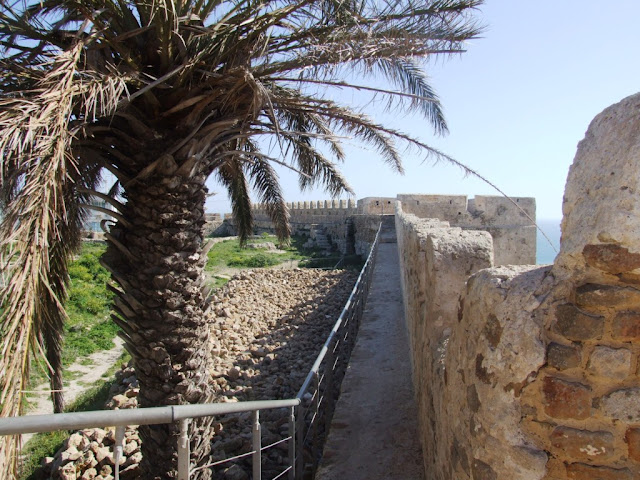