The trip up the Tunisian coast to Hammermet was another day hop. A delay waiting for someone to man the fuel dock and then absolutely no wind, dictating that we motored the whole way, it was late afternoon when we arrived at Port Yasmin on the southern outskirts of the city of Hammermet. The marina was described as being very modern with good facilities in the pilot book and we were looking forward to another pleasant stop.

We passed by two huge motor vessels from very different eras moored against the quay as we entered through the breakwaters. One a very modern, floating gin palace and the other being the very elegant, 19th century luxury motor yacht SS Delphine. No prizes for guessing which one was our favourite. The marina was very large and again mostly filled with boats that had been left unattended for the winter. Surrounding the marina area and stretching south down the coast were masses of holiday units, hotels, cafes and shopping areas. From what we could see from on deck however, what appeared to be lacking were people.

﻿
﻿We started to worry that a theme was developing as we were directed to moor next to the harbour’s resident pirate fleet. These Johnny Depp inspired tourist boats seemed to be haunting us everywhere we went. Once tied up our job was to head off to find a supermarket for some supplies while, Tim and Phil attended to the boat and Richard and Jayatma went exploring on their bikes.

It appears the marina and surrounding holiday accommodation, with over fifty thousand beds, complete with theme parks and anything else gaudy you can think of, was built in expectation of a huge influx of European tourists. Our extensive wanderings looking for the elusive supermarket our cruising guide told us was to be found ‘close by’ confirmed that the streets, apartments, cafes and shops were almost completely devoid of people. The majority of the seemingly endless retail premises were vacant and appeared to have never been occupied since construction. Most of those in use were filled with similar trashy tourist souvenirs and all had a tout at the front door almost begging you to come in and look. When we finally found what passed as the supermarket we were only able to obtain a couple of items on our list as it had very little on offer.
The lack of range in the supermarket scuttled Karen’s plans for dinner. In theory cooking duties on the boat were to be rotated around with everyone taking their turn but Karen’s abilities in the galley had proved a bit too popular and before long responsibility for evening meals was largely hers with Rob becoming kitchen hand helping with food prep etc. On Moksha this proved a little challenging at times. Before joining the boat we were aware that Jayatma’s diet was exclusively vegan while Richard described himself as mainly vegetarian. The owners dietary choices are the boat’s dietary choices. Red meat is a definite NO! There’s no junkfood snacks permitted and it’s also an alcohol free boat, so no drinking on board.

In preparation for the trip Karen had obtained a large collection of vegan recipes and even tried out a number on Rob before leaving Australia. The first curve ball hit when we joined Tim in Italy and he informed us that Jayatma was in fact raw vegan and didn’t eat any cooked food. Despite the initial shock and apart from Karen’s collection of vegan recipes going out the window, this didn’t prove too much of a problem as Jayatma prepares most of her own food and other than some peeling and chopping, Karen had little to worry about there. We also get to sample and enjoy some very interesting combinations of blended smoothies Jayatma produces. It may be hard to believe but a vile green looking concoction containing vitamised spinach and lettuce is actually very tasty when it also features pineapple, strawberries and bananas. You do have to get over appearances first however.

The challenge was discovering just where the limits of Richard’s ‘mainly vegetarian’ lay and coming up with a variety of meals that fitted within the boundaries and still satisfied the appetites of all on board. Vegetarian stir fries, pastas and risottos along with salads, salads, salads, some more salads and the occasional chicken or fish dish became the normal fare. Gluten free bread baked on board each day meant that, despite supplementing all the ‘rabbit food’ with a constant flow of peanut butter sandwiches, Rob lost weight.

After getting back to the boat from the supermarket and comparing notes with Richard and Jayatma we agreed the best way to describe the Port Yasmine was tacky and soul less. It may have been more interesting in the summer with some tourists and cruisers about and we hadn’t headed into the actual city of Hammermet but it didn’t take long to decide this would only be an overnight stay and we’d get out of the place next morning.

With Karen’s dinner plans in disarray, Richard decided it was his turn in the galley again and decided we were going to eat out at a floating restaurant in the marina that was described as the very best eatery in the area by Lonely Planet. Richard’s galley nights were always very popular with all the crew as it was our chance to order something from outside the ‘Moksha Menu’ and the odd steak and the like was much anticipated.

On approaching the, you guessed it, pirate ship themed restaurant, we wondered whether being the only patrons in the place should be a worry. Then we were entertained by a loud and very animated scuffle outside between what appeared to be a staff member from the establishment and perhaps a former employee or possibly disgruntled patron. Despite the shouting, pushing and shoving and fist waving, other than knowing someone was definitely not happy we had no idea what was going on as our Tunisian language skills equal zero. 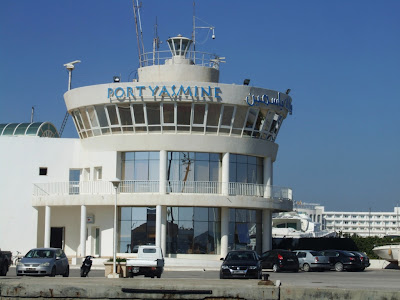 Richard was undeterred though and led our merry throng upstairs to the top floor where we could look out over the boats in the marina. Unfortunately, here the smell of cat urine in the room proved so overwhelming we were struggling for breath. Still with apparent absolute faith in Lonely Planet’s recommendation the boss decided maybe it would be best if we took a table down on the outside deck in the fresh air.

Outside the air was certainly ‘fresh’, about 4C fresh. We were glad we decided to be wimps and wear our heavy Musto wet weather jackets but, expecting to be dining warm and snug inside a classy restaurant, macho Tim had come out in shirtsleeves. The cold quickly overcame his sense of style as he borrowed a table cloth from the confused waiter and proceeded to wrap himself up in it. After a lengthy wait we were finally served quite a reasonable meal but we thought Tim might need oxygen when he went up to organise the account. The rest of us were making our way back towards the boat as he emptied his wallet and pockets to settle the outrageous bill but still came up one dingbat short. Shrugging his shoulders he said he’d bring it back later but was then chased up the dock and roundly abused by the unconvinced waiter so we may have found the explanation to the earlier scuffle. The Lonely Planet guide hadn’t mentioned that Piracy is alive and well in Hammermet.

We were up early next morning and quite happy to say adios Port Yasmine as we continued our odyssey northwards along the Tunisian coast.