The sun had not yet made an appearance when the alarm roused us from our bunk for the 57 nautical mile (105 kilometres) trip from our anchorage inside the Burnett River downstream from Bundaberg across to Lady Musgrave Island and its amazing coral lagoon. We’d prepared the boat for sea the previous afternoon so after our wake up coffee all that was left to do was wait for the predawn light to start illuminating the scene. We began raising the anchor as soon as a glow began to appear on the horizon and soon fell in behind our sailing buddies Richard and Michelle on La Nina as they headed down the channel towards open sea. 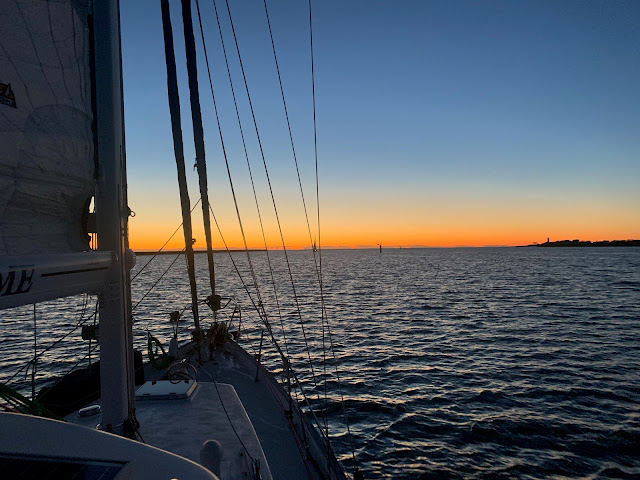 Heading out of the Burnett River in the pre-dawn light.

We had timed our passage to arrive at Lady Musgrave near the afternoon’s low tide scheduled for around 3.30pm so we could enter the channel when the current should be slack and the coral bombies inside the lagoon easier to see. Ideally, we like to navigate through reefs with the sun higher in the sky but were comfortable with our timing as we had the track to follow in from our previous visit and felt there would still be good enough sunlight for our arrival.

We raised the mainsail as we motored out of the river and unfurled the headsail once we exited the channel and turned onto our course. There was predicted to be a 15 knot south easterly breeze with a moderate accompanying swell. We soon discovered the wind was in fact blowing from the south west while a reasonably lumpy swell was rolling in from the south east pushing the stern around. In those conditions we have found Our Dreamtime handles better with the mizzen sail either reefed down or left in the sail bag entirely which is what we elected to do. 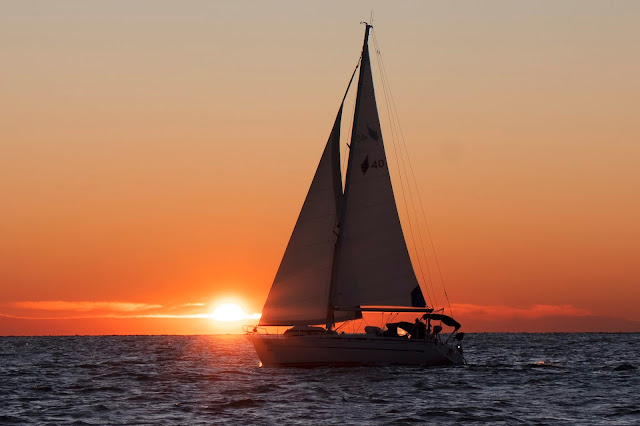 The sun made its welcome appearance to warm us up a little and provided a great backdrop to get some nice photos of La Nina sailing beside us. From there things settled down to a reasonably uneventful but bumpy sail through the morning. Around lunch time the wind swung around more from the south and unfortunately eased in strength. This saw us being pushed around more by the swell as the sails weren’t providing enough power to push the boat through the water and overcome their force so we reluctantly started the engine and motor-sailed the remainder of the way.

As we were rounding Lady Musgrave Island towards the lagoon entrance on the reef’s northern side we were joined by a huge pod of very friendly dolphins who played on our bow for quite a while. It was a great welcome that’s for sure and provided some awesome video footage. 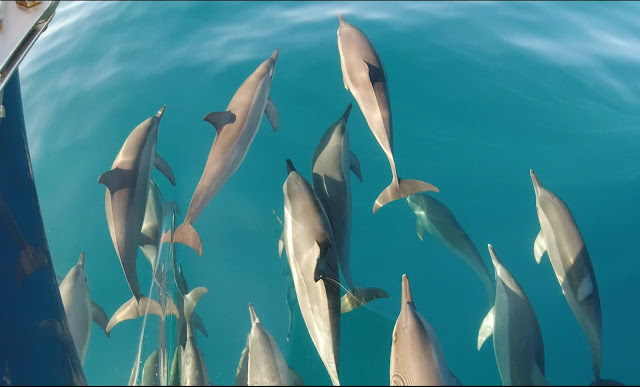 The great thing about Lady Musgrave reef is that you enter the lagoon via a straight, reasonably wide, deep water channel. There has been some conjecture whether the channel into the lagoon is a naturally occurring phenomenon or, as legend has it, was widened by guano miners many years ago. The current wide channel was recorded by surveys as early as 1938 whereas a report from early guano miners of the late 1800s describes the channel as ‘having a narrow deep-water entrance, enabling small vessels to enter or leave at any time of the tide. Being narrow it is somewhat difficult to locate.’ This would suggest the current broad channel is the result of widening at some stage since then by persons unknown.

As we approached the channel, Karen took the helm and Rob went to the bow as lookout. We find using small radios during anchoring and at times like this fantastic to assist communication back and forwards. Despite arriving almost right on the scheduled low tide we were surprised to find a very strong current still running with a huge amount of water pouring out of the lagoon. As we entered the channel a swirling back eddy swung the bow straight towards the wall of coral lining the starboard side of the entrance. We had a few anxious moments as Karen quickly swung the helm hard over with full engine revs. Despite this Our Dreamtime continued heading for what seemed an inevitable and likely devastating crunch against the coral. Fortunately she finally broke the current’s grip and skirted along the edge of the channel just a boat’s width off the reef. Following us on La Nina, Richard witnessed our fun and games and steered well clear of that side of the channel for an uneventful entry. There are distinct advantages to going second. 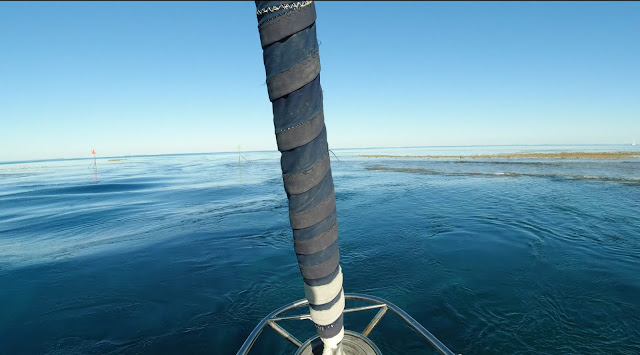 Once through the channel we easily picked our way through the coral bombies and found a good spot to anchor in sand amongst a surprising number of boats already ensconced in the lagoon. Our heart rates were still up a bit by the time the boat was all secured and engine off. Our post passage G&Ts were served up very quickly and went down just as fast while we debriefed our close call. 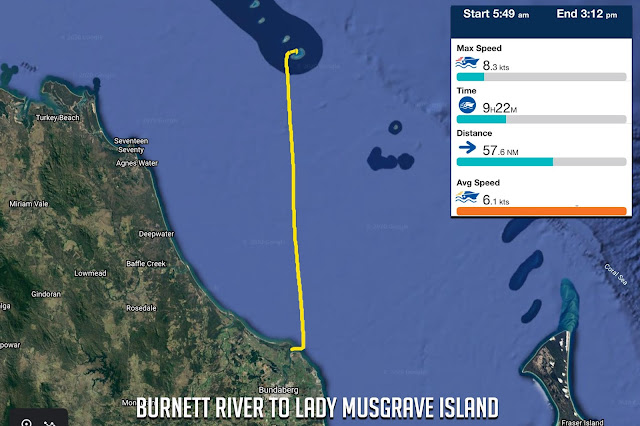 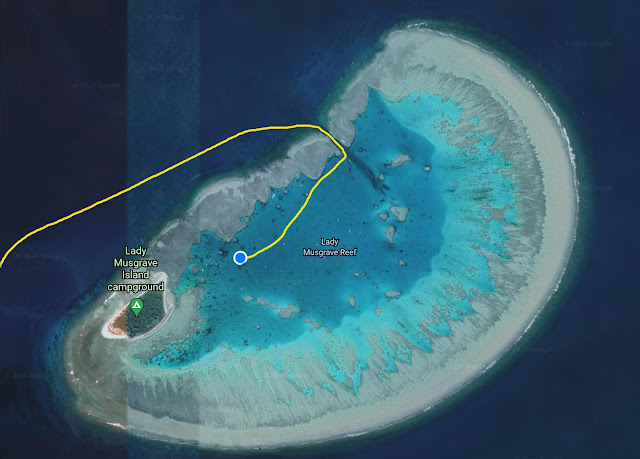 Karen had done a fantastic job on the helm to avoid disaster but the effort had aggravated her left shoulder which is still not 100% following her surgery in March. While we entered the channel only just before the scheduled low tide, clearly the lagoon had not yet emptied and instead of a slack current we pushed into a torrent of swirling water. If we were to strike the same circumstances again, we will definitely stand off and wait for the current to settle before making our entrance rather than risk a repeat. We had two video cameras recording during the entry to the lagoon and, when we reviewed the footage later, the serious concern in our voices was very evident. It should make an interesting segment when we edit up the Lady Musgrave episode for our YouTube Channel. 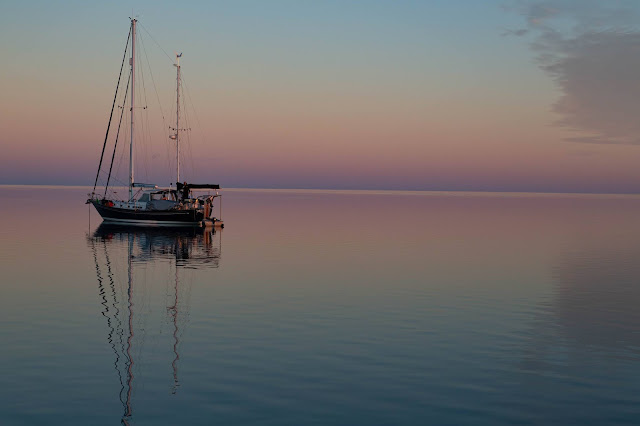 However, what followed were two wonderful days exploring the island and its lagoon in glorious weather. We witnessed more of its amazing wildlife as we walked the beaches and dinghied over its coral. Unfortunately we found the water still too cold for comfort. We really enjoyed our time under the water on our last visit here with our Grandson, Kristian, onboard back in 2016 but that was early November and this was May. So snorkelling will have to wait until we get further north away from winter’s grip. 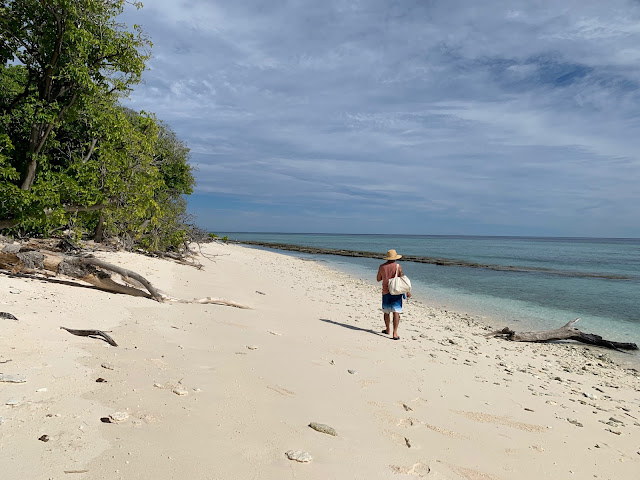 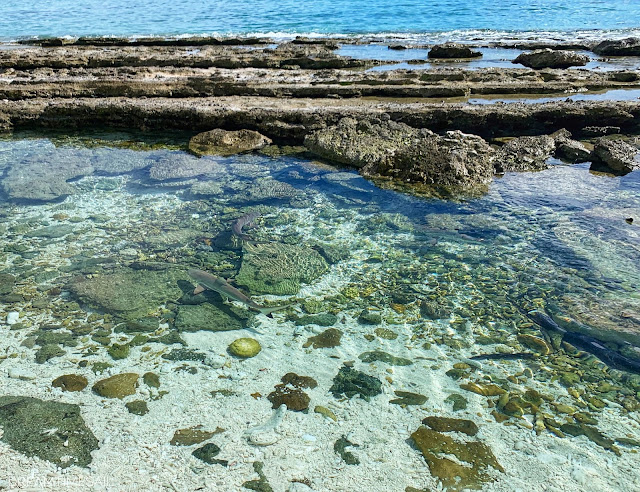 Small reef sharks in the shallows 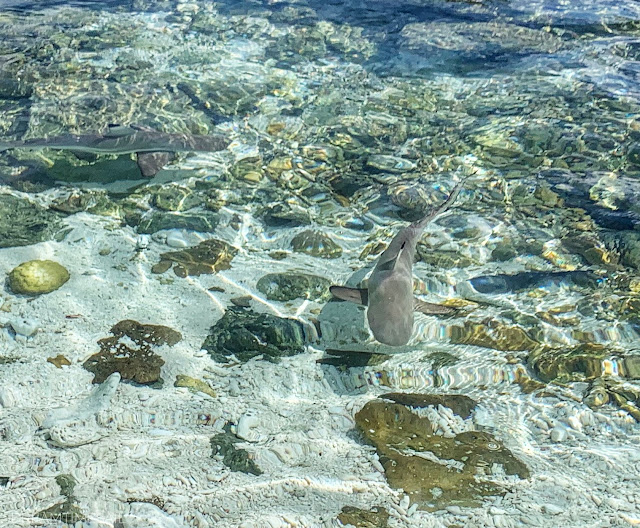 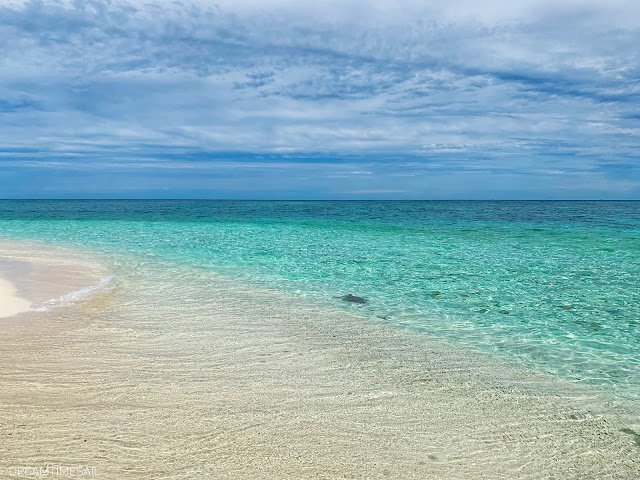 A turtle gliding by the beach in the clear waters 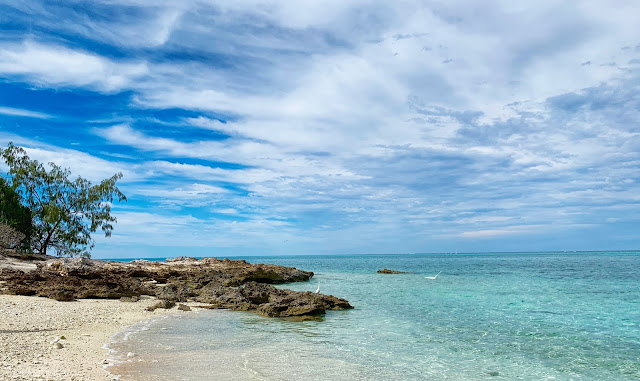 If this isn't paradise we don't know what is. 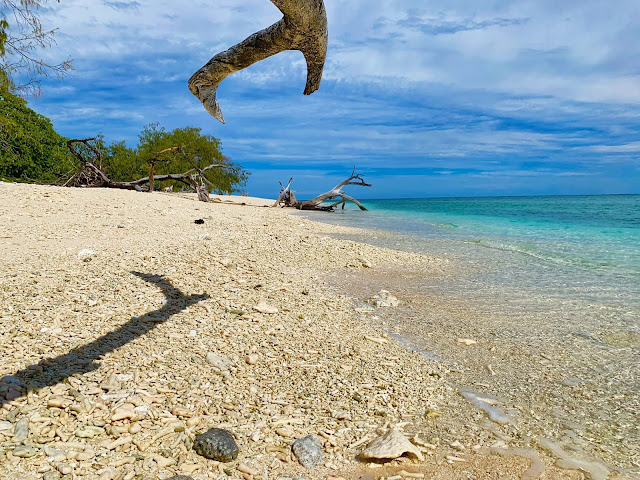 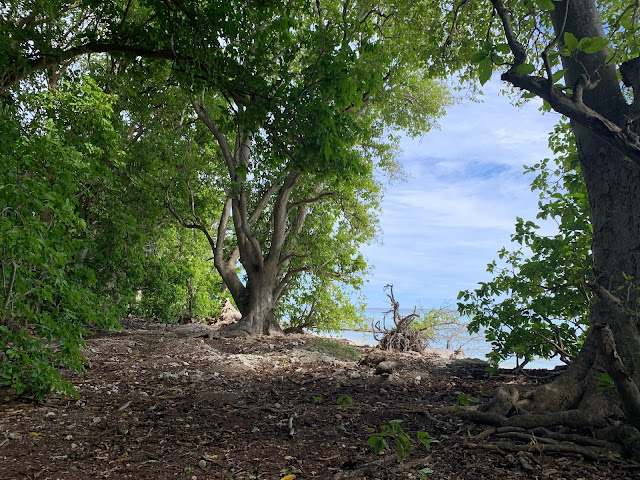 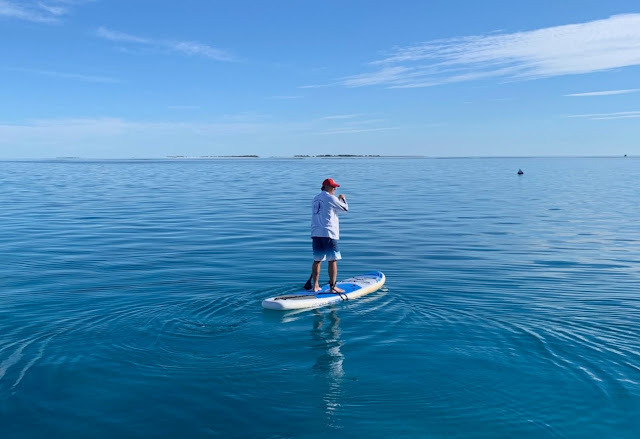 Rob went paddling over the coral for a closer view.

We experienced incredible sunrise and sunsets each day in the lagoon with literally hundreds of photos taken. Picking which to use here in the blog was no easy task that’s for sure. 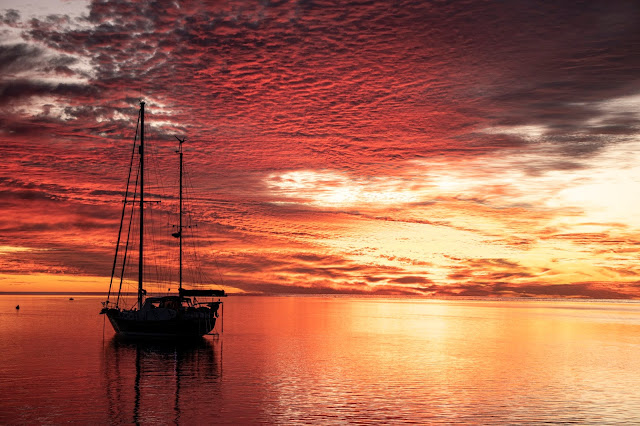 Our Dreamtime at sunset 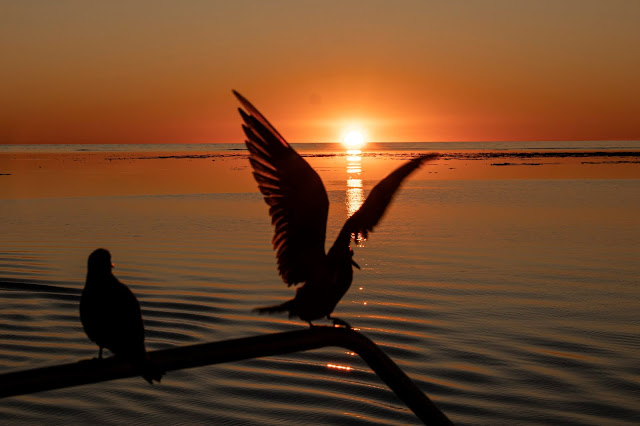 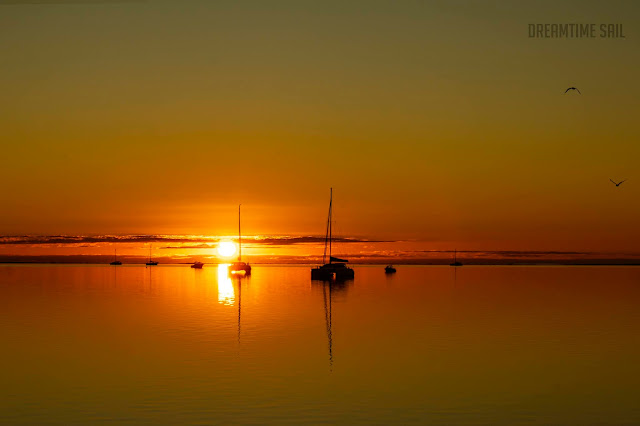 By the time we reached Lady Musgrave, we had already spent three weeks far away from Covid 19 in ‘Isolation Afloat’ onboard Our Dreamtime since leaving Manly. So one of the best things about our time here was finally feeling safe to socialise with some of the other sailors. We found we now had a ‘Cruisers Bubble’ with people in a similar situation who had also been away from land for varying periods long in excess of the publicised 14 day quarantine period associated with Covid. We had a loose set of questions we used when a fellow sailor approached in their dinghy or we came across someone on the beach. It went along the lines of “Hi how are you? Which boat are you on? Oh Lovely. Where have you come from? How long have you been underway?” While being friendly to all, with anyone that has recently been back to civilisation we apply sensible social distancing rules until a ‘safe’ period of time has elapsed.

It was great to actually step onboard La Nina, physically meet Richard and Michelle and enjoy sundowners. We had been sailing together on and off since Moreton Bay but had never been on each other’s boat until Lady Musgrave where we quickly cemented what’s become a great friendship. We also caught up with Georgie and Ross off Starship who we had met years ago along with meeting a number of new friends. 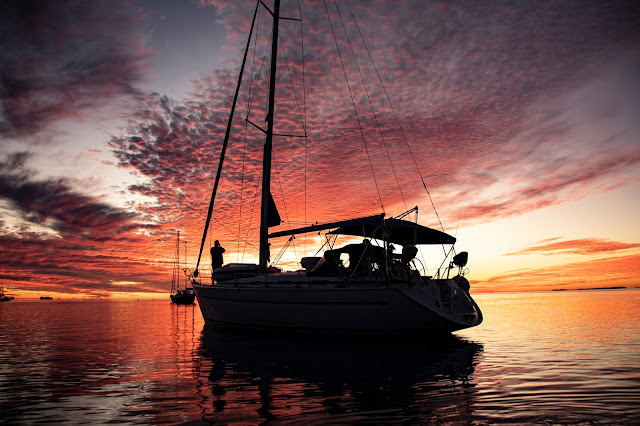 By now there were also encouraging signs in the news that Australia may get things under control regarding Covid, particularly in our State, Queensland. While we were confident that we were doing everything possible to stay safe ourselves, we couldn’t help be very concerned about family and friends not as fortunate as we were so it was a relief to see case numbers dropping and hopefully some light at the end of the tunnel.

In a lot of ways, Lady Musgrave was the beginning of this trip’s true cruising as we were finally relaxing and doing it the way it’s supposed to be. We may not be able to sail off overseas as we had expected to, but Australia’s Great Barrier Reef Islands are an amazing Plan B.

If you have only recently discovered our blog and would like to read how it all started, or work through our previous adventures, click the link to go back to our first blog entry. Stuff it. Let's just go sailing anyway.
You can also find a full list of all our past blogs by clicking on the Contents tab above.