After a few days enjoying the delights of Mooloolaba we had to face the fast approaching end of our five month shakedown cruise through many of Australia’s fantastic Great Barrier Reef Islands. It was time for the final leg from Mooloolaba via Moreton Island back to homeport at East Coast Marina in Manly boat harbour.


We eased out between the breakwaters of Mooloolaba shortly after dawn, rounded point Cartwright and headed south. We had expected a nice north-easterly but in the early morning it wasn’t strong enough to fill the canvas so we motor sailed towards Caloundra.


As it turned out, the wind never filled in all day and our 80 HP Ford Lehman was required for duty the whole 35.1 nautical mile trip as we skirted the main shipping channel into the Port of Brisbane dodging massive container vessels. 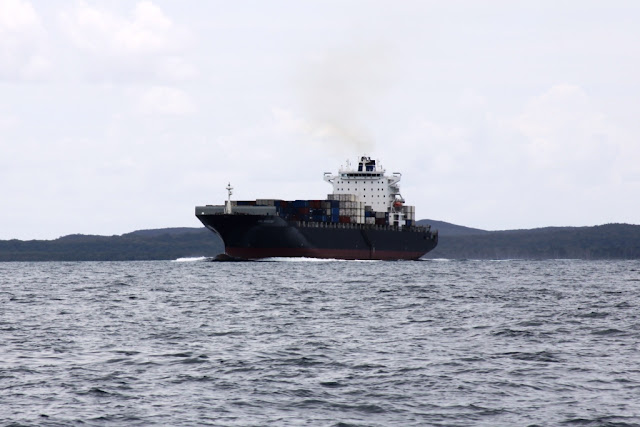 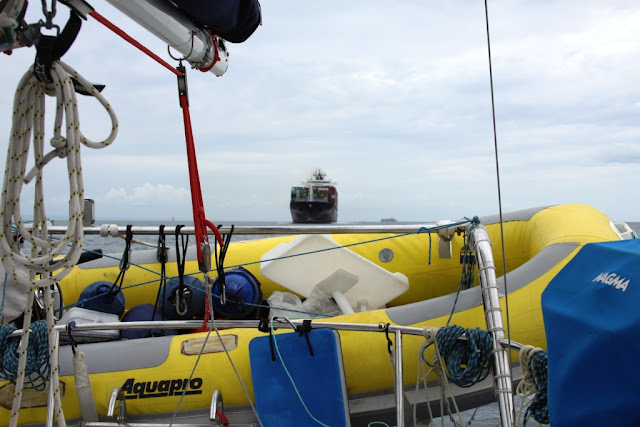 We anchored in behind the wrecks just north of Tangalooma Resort on Moreton Island in time for lunch and a relaxing afternoon, for us anyway. Marc went ashore for a walk on the beach and set out to climb the sandhills to take in the view. The  most strenuous activity we got up to was trolling a lure behind the dinghy for a few circuits of the wrecks unsuccessfully trying to catch some dinner.


Later we did enjoy a typically awesome Tangalooma sunset dutifully accompanied with some of our fast dwindling wine supplies and another great meal from Karen.

Next day we moved down the shore to the southern side of the resort to get away from the crowd of day boats all intent on cramming in behind the wrecks. We went ashore to the resort for a wander around mid morning. We retired to one of the pools for a long, lazy soak while Marc headed off for a long walk to an area of the island called “The Desert”. He was quite enjoying the opportunity to get some exercise and this reasonably long walk through sandy, undulating  tracks certainly gave him a workout. 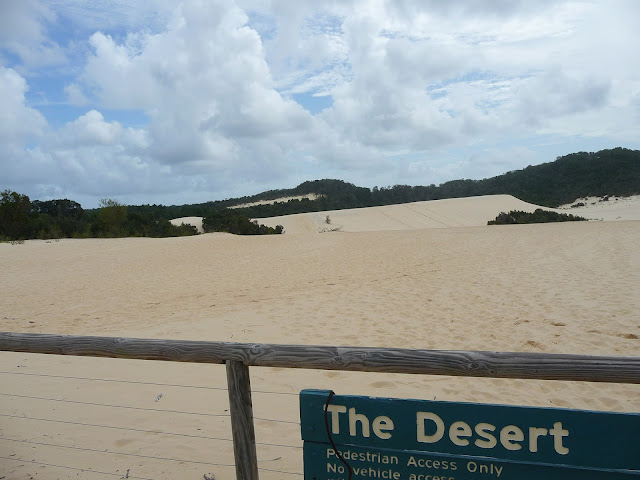 We returned to the boat mid afternoon and settled back doing a whole lot of nothing much. Marc appeared on the beach a couple of hours later ready for pickup in the dinghy. He was very impressed with the walk and found the desert experience in the middle of a heavily vegetated island quite surreal.


The following day we planned to move further south along the Moreton Island coast to one of our favourite anchorages at  a spot appropriately named “The Sand Hills”. Here we were going to be joined by our neighbours from East Coast Marina, Bob and Lyn on their ketch, Whoosh. Over drinks that night, Rob jokingly said to Marc that as he was enjoying his hiking so much he might like to walk down the beach to our next stop, after all it was only seven and a half miles.
To our surprise, Marc appeared at breakfast next morning with the plan to do just that. So with a good supply of water, a few muesli bars for sustenance and Brit resolve he was dropped to the beach and off he headed. Meanwhile we settled back for another cup of coffee and a read of the online newspapers.


Seven and a half nautical miles is almost 14 kilometres so we gave Marc two hours head start before we raised the anchor and slowly cruised along the coast keeping a lookout for our mad mate ashore. It surprised us how far along he’d gone by the time we passed him by. We were able to anchor up and settle in well before he reappeared on the beach waving to be picked up.


The anchorage at the Sand  Hills shoals very gradually out from the beach making it necessary to anchor a few hundred metres offshore. The shallows dry at low tide leaving you with a long walk back to reach even enough depth for a dinghy. As it was approaching low tide Marc elected to wade out off the beach into thigh deep water to make it easier for Rob to reach him in the dinghy. It was about now he remembered what we had told him about the large number of stingrays that frequent these shoals and was feeling relieved he hadn’t come across wading through the shallows.


As Rob approached Marc in the dinghy, it spooked a group of six or eight large rays boasting spans of over a meter that had been resting in the sand. They all began fleeing the approaching dinghy – straight towards Marc whose face immediately took on a  look of ‘deep concern’. Recounting later seeing a swarm of huge Australian marine life charging his way through the clear water, Marc refused to class his facial expression as near panic.


Whether it was a logically sensible decision made to keep very still or he was frozen to the spot we are not sure but it proved to be the right strategy as all the rays made last second diversions around him and fled on their way . Stingrays are not aggressive but instinctively strike with their venomous tail if threatened. Sudden movement can do it.


After surviving yet another encounter with Australia’s deadly fauna Marc was well ready for a glass or four of red as told us of his trek along the beach and some of the sights he come across.


We spent the next couple of days at the sand hills with Marc going ashore for more hikes while we did some exploring of the shallows in our kayak getting very up close and personal with a number of huge rays, turtles and scores of shovelnose sharks. 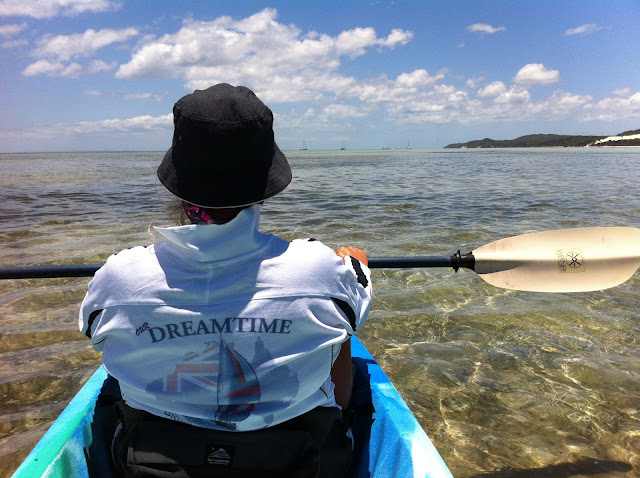 We also fitted in a little fishing, crabbing and a lot of socialising with the crew of Whoosh including enjoying sundowners from high on the sand hills one evening. 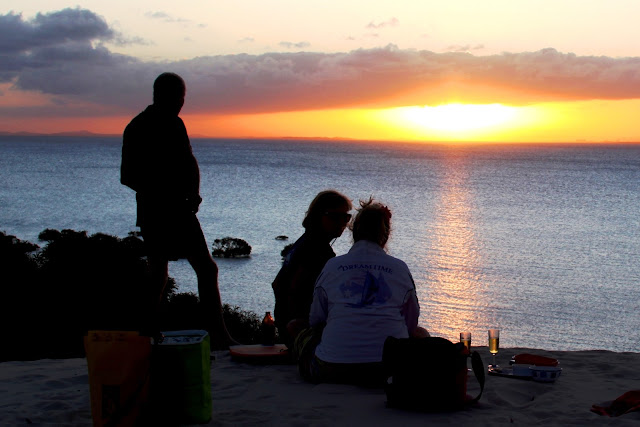 Time was now almost up and finally we waved good bye to Whoosh, upped anchor and enjoyed a very pleasant sail back across Moreton Bay towards home port. We weren’t quite done yet though as we dropped anchor at Green Island for one final night out of the marina.


As Karen cooked up a superb last supper aboard for the three of us, Marc emerged from rummaging around under the sole where we store the wine with the sad proclamation, “Chaps, I’m extremely sorry to report that we are now officially out of red wine. Your calculations of our requirements was almost perfect. If I hadn’t spilled so much we would have made it.”


After a good laugh from us, the good news was the bubbles and white stocks were still OK but did get knocked around through the evening.


At 8.35am on December 22nd Our Dreamtime slipped quietly into her berth at East Coast Marina in Manly Boat Harbour officially ending our five month sojourn to the tropics.
We had planned it as a shakedown cruise and it had been all of that. The most serious issues being a transmission failure in Bundaberg that cost us a month in port and more dollars than we like to think about and the refrigeration stopped working at Brampton Island on our way home. They are mechanical issues that can happen on any boat but we are pleased they happened here on our shakedown and not in some remote part of the Pacific.


We were super impressed with how well the boat sailed and learned a huge amount about how to get the best out of her. She proved to be a fantastic live aboard boat easily accommodating us and our guests, Anthony and Linda in the Whitsundays and, of course, our crewmate Marc for the whole trip south. We are delighted with our Whitby 42.


All that was left was a huge day of cleaning the boat from top to bottom. Our son, Rod, came to pick us up in the afternoon and we were very happy he has a truck as the amount of washing alone we unloaded off the boat near filled it. Then it was off to Ipswich to catch up with family and friends.


Marc stayed with us a few days longer to experience a typical, relaxed Aussie Christmas with our daughter, Yasmin, son-in-law, Rob, and our youngest grandies, Lyla and Harry. Christmas temperatures near 30C and lunch of juicy leg ham carved off the bone, kilos of fresh prawns accompanied by salads was far removed from anything he had experienced in jolly old England and a real eye opener for him. 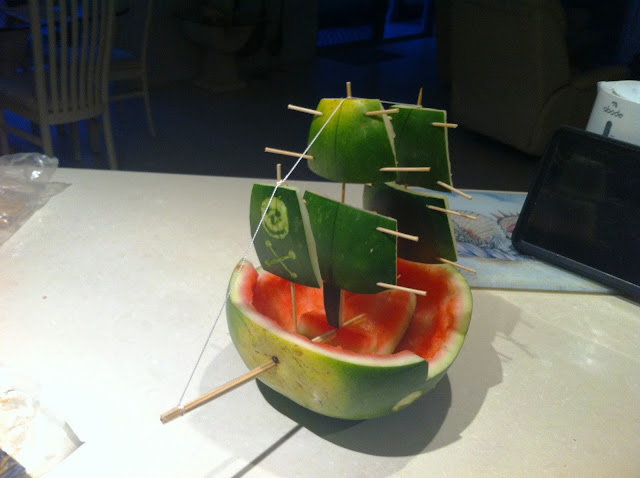 It wasn’t until we saw him off at the airport for his flight back to London on Boxing Day that this leg of our adventures really felt totally over. We have sailed with Marc in South East Asia, the Mediterranean and now Australia and each time we have parted at an airport there has been no goodbye, but rather a “See you later.”