When we bought the boat we plan to cruise the western Pacific and Asia in for the next decade and beyond, a Whitby 42 cutter rigged ketch, she came with a 3.1m rib that showed clear signs of her 12 years of service since manufacture but seemed solid enough for the time being. Our plan was we would get a new rib before heading off into the deep blue.

Fast forward 12 months in which we have had the masts off, rewired and renewed all associated lights in both, replaced all standing rigging, much of the running rigging, repainted the hull, fitted new pumps, instruments, refrigeration motor and compressor, life raft, along with a myriad of smaller jobs that all eat dollars and our refit budget had taken on a distinctly sickly, pale colour. With a new dinghy, solar panels, AIS and auto-pilot as major items still on the to-do list, some economizing was no longer desirable but compulsory.

By now our poor rib hung from the davits sagging like last birthday’s party balloons. It needed a serious injection of air immediately before every use and we’d dare not go anywhere without taking the pump with us for the return trip.  Nonetheless, we started to think twice about the expense of a replacement. To handle our 15hp outboard, we were being quoted $3,500 to $5,500 depending on the make and model so we began researching ways to extend the life of what we had. Let’s hear it for Google and cruiser forums.


We came across a discussion by people in the U.S.A. who had faced the same dilemma before managing a very successful, DYO rejuvenation of their tired rib. They strongly recommended a range of sealer and paints produced by ‘Inland Marine.’ Armed with the full details off we went to our local chandlery only to be told they had never heard of it and had nothing similar. The story was repeated at two more large and generally well-stocked chandlers so it was back to Google for us.

Despite a lot of looking, we found no Australian stockists at all but thankfully a New Zealand listing did appear. When we read that a business had been set up by two Kiwi boaters to solely sell this product and nothing else we were a little surprised but even more determined to give it a go. We placed an online order and received a confirmation email within the hour stating it would be delivered to us in Brisbane within the week. The products are water based and as such can be sent by air and arrived as promised. Comprehensive instructions were included. Now we could get on with it.

Update: As of 2017, Inland Marine Products are now sold in NZ, Australia and the Pacific Islands by Sailors Corner Ltd. We found their website difficult to find info on but they responded quickly to an email inquiry. They can be contacted on sailors@sailors.co.nz

Step One.
We fully inflated the dinghy and did the soapy water test all over to identify where the leaks were. We soon discovered the worst was in an area of heavy wear near one of the seams.
Step Two.
After half deflating the pontoons, we squirted about 230mls of the ‘Inland Marine Sealant’ past the valve and into each chamber. We were then careful to rinse each valve with a small amount of fresh water to prevent them getting stuck up by the sealant.

Step Three.
We re-inflated the pontoons just enough to make them rigid then slowly rolled the boat over side to side and end for end a number of times to make sure the entire insides of the chambers were coated. After that it was a case of just turning once each half-hour for three hours to prevent any pooling. We then left the boat overnight.

Step Four.
After inflating everything back to full pressure, we went back over every centimeter with the soapy water test again looking for any leaks but found no sign of escaping air at all. Given the state of our dinghy we had really expected it to need at least two applications of the sealer but, now weeks later, she’s still tight as a drum. Happy days!

Step Five.
We had decided if we were going to breath new life into old saggy bottom we also wanted to make her look good and provide the exterior of her hypalon pontoons some added protection from the elements. The aluminum hull was sanded and then received two coats of primer before another couple of coats of shiny bright ‘Marker Yellow’ marine enamel. (We desperately hope our dingy is never upturned in the ocean in need of spotting from the air but, if that should ever arise, we’d rather she is highly visible.)

Step Six.
The underneath of the pontoons was then hand sanded with 100 grit to rough up the surface before being washed off with water and then thoroughly wiped over with acetone. We masked up the hull and rub strake before putting on two coats of the ‘Inland Marine Topside Paint’ in grey. You do need to allow three hours between coats but the product was very easy to apply and using a good quality brush minimised stroke marks in the paint.

Step Five.
It was now time for the top. Grab handles that had fallen off were re-bonded back on using two-part inflatable boat adhesive from ‘Polymarine Ltd’ following the simple instructions provided. We then repeated the prep discussed above but in our theme of making the dinghy easy to see, the tops and insides of the pontoons were painted in yellow with just the reinforced seating pads in the grey for contrast.

Step Six.
After the inside of the hull was spruced up with two coats of white we were done. Our twelve-year-old dinghy was now ready for many more happy years as a teenager, although most people think we have a new baby until we tell them the story of her makeover. None of the work was difficult, and all the products used came with easy to follow instructions. However, the process does take a number of days due to the curing time between coats etc. 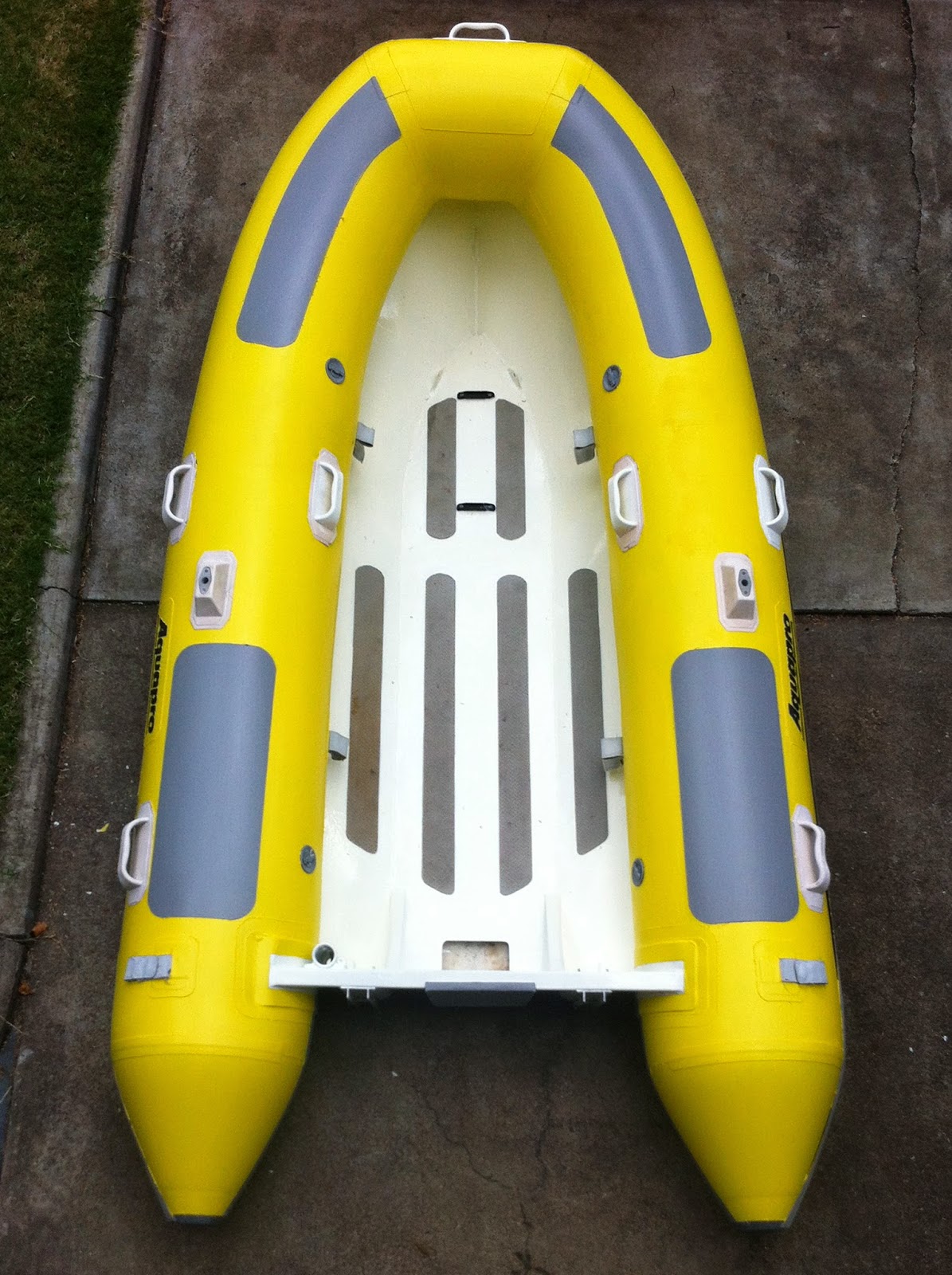 - For a larger dinghy or a leak requiring multiple applications a quart bottle of the sealant may be required.

- The job could be done about $135 cheaper with the pontoons and hull done in one colour rather than our use of grey and yellow topside paint for the pontoons with white and yellow enamel for the aluminium hull.

- For our American readers, a quick check on the internet shows the products are naturally a bit cheaper in the USA than over here, particularly when viewed in $USD.

- In Australia, New Zealand and the Pacific Islands the Inland Marine products are now available online from Sailors Corner Ltd . 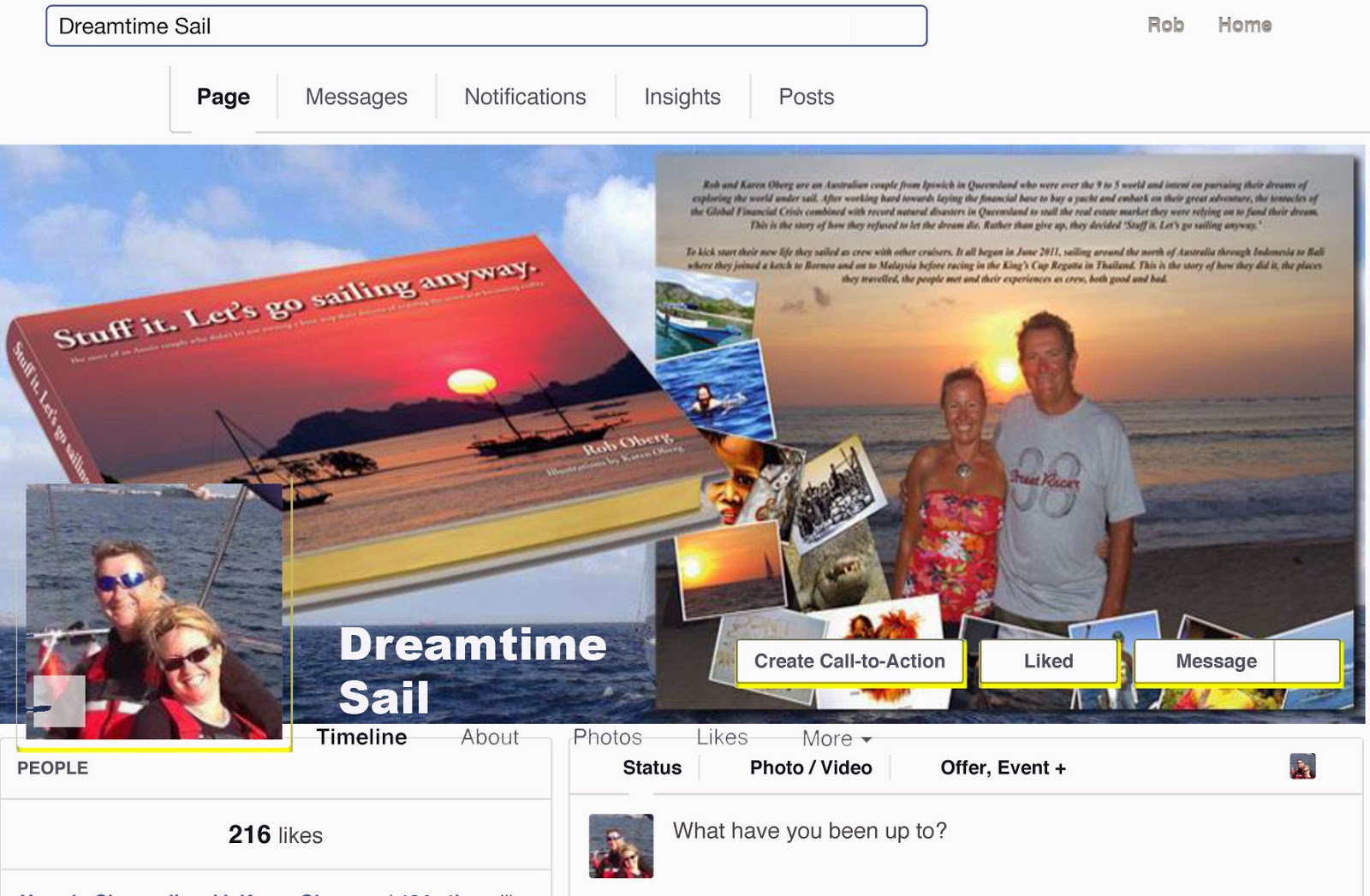