The nights are certainly cooling down here on the Rock but thankfully many of the days have been sun filled with quite pleasant temperatures in the mid to high teens zone. We’ve been making the most of the good days doing plenty of walking to explore our winter home. Not only have we found some great little spots on our wanderings, but we’re also enjoying the chance to get some regular exercise which can be difficult at times when you live within the confines of a boat. 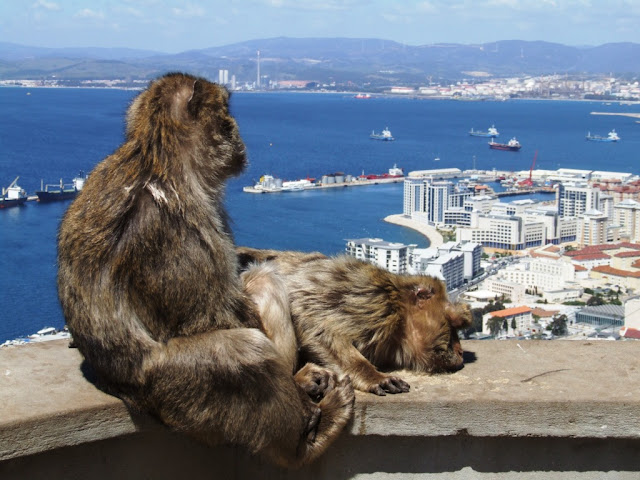 Our weekly shopping trip to the supermarket across the border in Spain provides a good ten kilometre workout. We’ve added to this the good walk through the streets and tunnels along the western side of the Gibraltar to Europa Point with its great views across the water to Morocco and another route around to Catalan Bay on the eastern side of the rock.


Catalan Bay has quickly become our favourite. It has a completely different look and feel to the rest of Gibraltar. The cafes offer a great range of food with no sign of the ubiquitous ‘British Pub Grub’ which is the staple offering of almost every establishment in the main town. Even the prices are much more like Spain instead of London. The beach itself is wide and well protected and we can well imagine it would be extremely popular in summer. Unfortunately the walk to reach Catalan Bay takes us through some of the least attractive parts of Gibraltar including the city dump. It does encourage us to set a cracking pace though which is good for the exercise plan at least.


We’ve settled into our winter base at Queensway Quay Marina pretty well. There is quite a serious surge here in the Marina on occasions. We’ve got Alcheringa trussed up with eight mooring lines in all but we still dart about a bit at times. The boat will be pushed quickly in one direction or another all of a sudden then stop sharply when the lines pull tight. It’s like being in a bus with the driver constantly jumping hard on the brakes and not a bad recipe for motion sickness if you’re cooped up below. Fortunately our big salon windows make the boat feel a lot more light and airy than most which really helps a lot in that regard.


We have got to know a few of the other live aboard cruisers hosting guests aboard Alcheringa and socialising on other boats which has been great. Sunday night is Quiz Night at ‘The Lounge’, our local here in Queensway, and we’ve put together a team the last couple of weeks which has distinguished itself by not coming last. We’ve struggled a little when all the famous faces and news questions are UK-centric. How are Aussies supposed to name ten British Cabinet Ministers just from their photos for cripes sake? Good fun over a couple of reds though.
Now the Formula One and Australian V8 Supercar seasons are over we’ve kept ourselves from getting too bored by following the progress of the Vendee Globe, an amazing solo race around the world on high performance 60 foot yachts. We were lucky enough to get up close and have a good look at many of the boats when we stopped over in Cascais, Portugal on our way to the UK on Curious in May. The fleet completed one of their lead up races while we were there and stayed in the same marina. They are amazing boats and even more amazing athletes that sail them.

The race started from France on November 10 with over 100,000 spectators lining the canal and breakwaters from the marina to watch the twenty boats leave. The course for the Vendée Globe is very simple. You sail around the world from west to east via the three major capes of Good Hope, Leeuwin and the Horn. There is a long slide down the Atlantic, the perilous voyage across the Southern Ocean with firstly the Indian Ocean and its massive waves, then the Pacific Ocean, the world’s biggest body of water. Finally, there is the climb back up the Atlantic to head back to Les Sables d’Olonne, which marks the start and finish of the Everest of the seas.
Modern technology makes it possible for us to follow the progress of the race with constant updated news including live video reports by the skippers direct from the boats along with fantastic satellite tracking where you can see the progress of the whole fleet. Their speed is unbelievable with a new 24 hour single handed record of 502.53 nautical miles (914.6 kilometres) set last week. That’s an average of 20.9 knots (38.1 kph)

﻿﻿
﻿
We’re barracking for a Brit, Alex Thomsen, who’s sailing Hugo Boss. It’s a survivor of the last Vendee Globe and not quite as light and modern as the newer generation boats yet he’s been able to stick with the leading pack and has been as high as second position on the run down the southern Atlantic. He constantly has to play the game of looking for alternative strategies as if he just follows the leaders they’re superior boat speed will leave him behind. After only 24 days the leaders have just passed the Cape of Good Hope and Alex has headed further south than the four other leaders looking for more wind. It must have worked. He hit a top speed of 31.2 knots (56.8 kph) today. That is flying. It’s also absolutely frightening.


The fleet is now headed across the Indian Ocean towards Australia. Take a look at the Vendee Globe's excellent website http://www.vendeeglobe.org/en/ to see what’s got us excited or check out the fleet tracking at http://tracking2012.vendeeglobe.org/en/ . It’s well worth a look.


For more about our travels and lots more photos check out and 'like' our Dreamtime Sail facebook page at http://www.facebook.com/DreamtimeSail?ref=hl