When we decided to embark on a road trip through southern Spain we weren’t exactly sure where we should go and what we should be trying to see.  Sitting in our hotel room in Cartagena with a map of Spain presented way too many possibilities. Looking for inspiration, Rob threw a general request up on facebook asking for suggestions from any of our friends who’d travelled the area. We were surprised by how many immediate responses the post generated. Almost without fail everyone included the city of Grenada as a ‘must see’ .

So after a fantastic few days in Seville, we loaded up the mighty micro rent-a-wreck with our worldly possessions of a duffle bag and back pack each, fired up the navigation program on the Ipad and plotted a course to find out just what had led so many friends to rate Grenada so highly.

After extricating ourselves from the impossibly narrow streets that form the maze of Seville’s old city we were soon heading towards the east through the countryside. Spain’s highway system is actually pretty good and with the speed limit a very civilised 120kph. We were also very impressed by the roadside signs warning motorcyclists to be careful of idiot car drivers going slow on the motorway. We wish the Australian authorities were as enlightened. Rob subscribes to the theory that you’ll always get away with 10K over so our poor little buzz box’s engine was gasping for breath trying to maintain 130kph up some of the climbs. He further justified lead footing by saying he didn’t want any of those speeding bikes imbedded in our duffle bags in the boot.

The upshot was that we made pretty good time and reached Grenada in time to do some exploring  that afternoon. After turning left out the hotel door we soon found ourselves surrounded by fairly ugly apartment blocks, in suburbia and wondering what the hell we were doing in this hole. Surely this can’t be the Grenada everyone raved about. There must be better just around the corner. An hour later, hopelessly lost, we spied through a gap in the concrete jungle an amazing medieval fortress stretching far along a ridge top in the distance. Bugger! We should of turned right leaving the hotel. Note to self – look at a map before wandering off in a strange city.

Half an hour later, newly acquired map in hand, we were winding our way through fantastic narrow laneways lined with stores offering all sorts of bargains as we climbed ever upwards.

For some reason Grenada seems to be a hot bed for bucks and hens parties. We passed over ten different groups celebrating upcoming nuptials in different wacky outfits and generally high levels of inebriation. 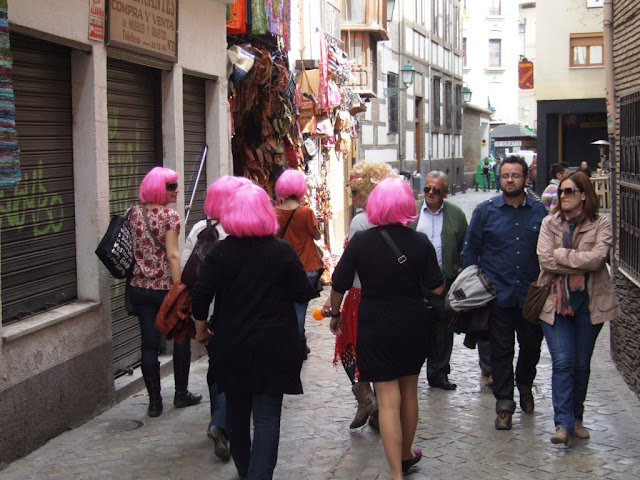 Finally we reached the Mirador de San Nicolás, a square on top of a high hill, and were rewarded with a great view across a narrow valley to one of Spain’s most incredible man made features, the Alhambra. Literally hundreds of people were sitting all around the square simply taking in the sight of this huge piece of history and the snow covered Siera Nevada mountains that formed its backdrop. OK Grenada, we were now impressed. 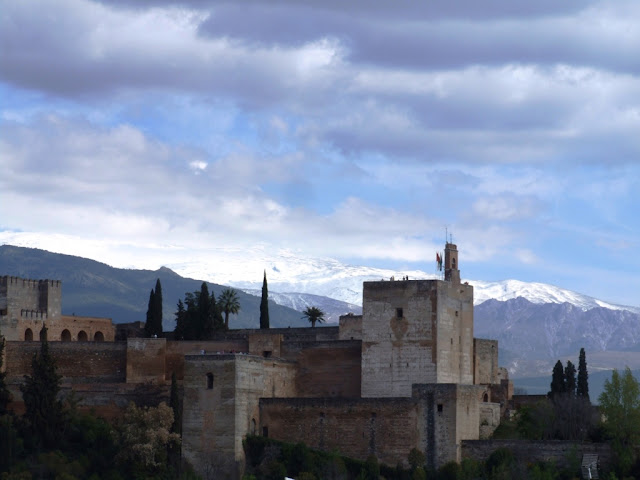 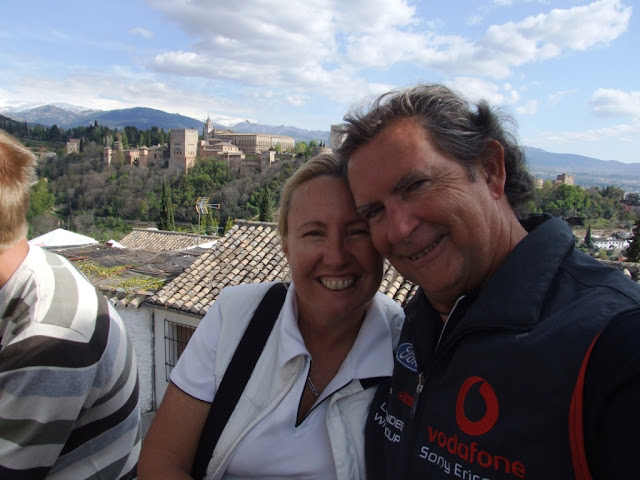 Back in our hotel we belatedly launched into some online research about the place to plan our visit the next day.


The Alhambra's Moorish palaces were built for the last Muslim Emirs in Spain and its court. Completed towards the end of Muslim rule of Spain by Yusuf I (1333–1353) and Muhammed V, Sultan of Granada (1353–1391), the Alhambra is a reflection of the culture of the last centuries of the Moorish rule, by then reduced to just the Nasrid Emirate of Granada. It is a place where artists and intellectuals had taken refuge as the Spanish Christians won victories over Al Andalus.

The Alhambra integrates natural site qualities and is a testament to Moorish culture in Spain and the skills of Muslim, Jewish, and Christian artisans, craftsmen, and builders of their era. The literal translation of Alhambra, " the red (female)," reflects the colour of the red clay of the surroundings of which the fort is made. After the reconquest by the Catholic Monarchs in 1492, some portions were used by the Christian rulers. The Palace of Charles V, built by Charles V, Holy Roman Emperor in 1527, was inserted in the Alhambra within the Nasrid fortifications.

After being allowed to fall into disrepair for centuries, the Alhambra was "discovered" in the 19th century by European scholars and travellers, with restorations commencing. It is now one of Spain's major tourist attractions, exhibiting the country's most significant and well known Islamic architecture, together with 16th-century and later Christian building and garden interventions. The Alhambra is a UNESCO World Heritage Site, and the inspiration one of the most popular tourist attractions in all of Spain.

The bad news was that although admission to the general areas of the Alhambra was inexpensive, tickets to go through the palaces and military section were limited and normally booked out days in advance. You can line up early in the morning in the hope of scoring one of the very limited number they make available on the day but we were able to obtain some from one of the local companies that offer guided tours.

Our plan was to spend the morning there and then have a look at some more of the old part of the town in the afternoon. It didn’t work out that way. We can honestly say that the Alhambra was the most remarkable place we have visited on this trip. We spent all day exploring the palaces and different areas and still did not see it all. It was very late in the afternoon before we made our way down the hill and even then we found a café with a good view of the fortifications and enjoyed a bottle of wine still staring up at its walls.
Here is just a small sample of the hundreds of photographs Rob took. There were thousands of people in the place and he spent ages trying to get shots without them in as much as possible. If you’ve got some time on your hands google Alhambra Grenada and see more about this amazing place. Thankyou everyone that recommended we go there. We are in your debt. 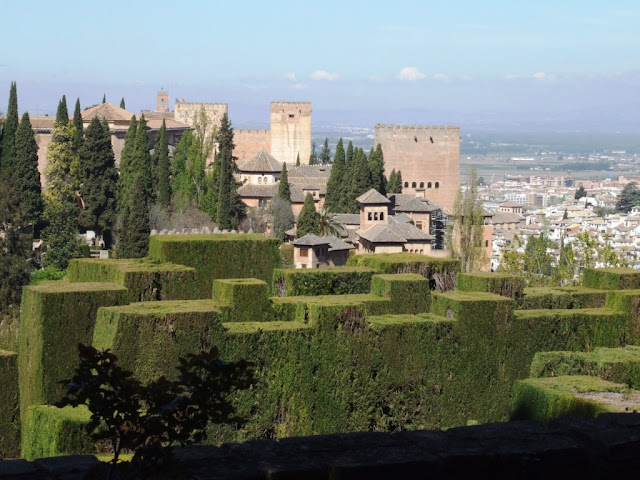 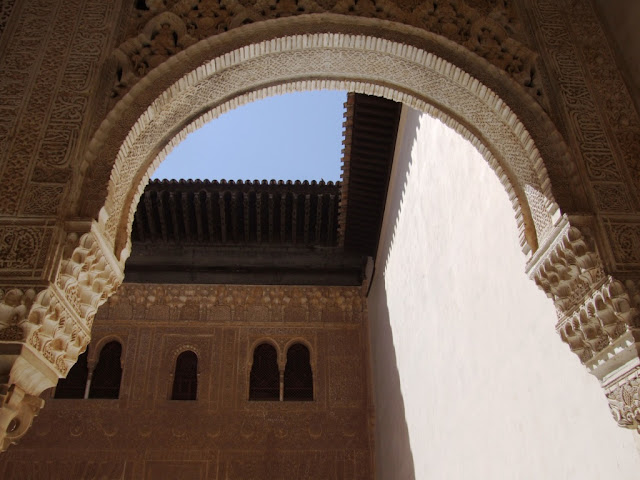 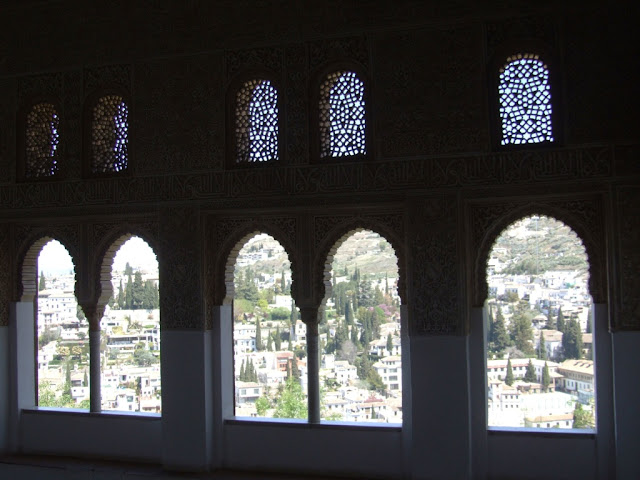 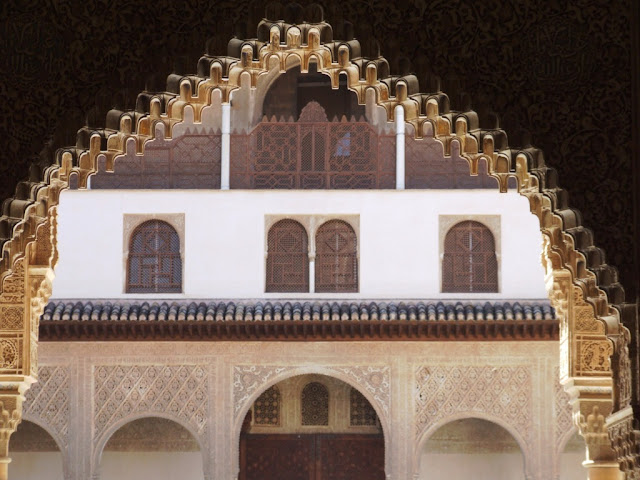 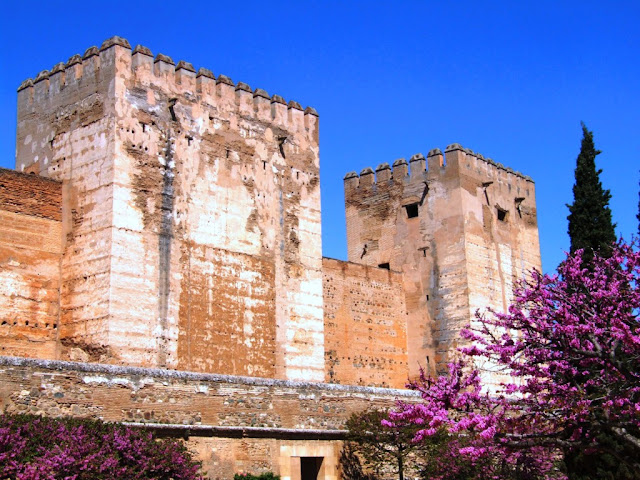 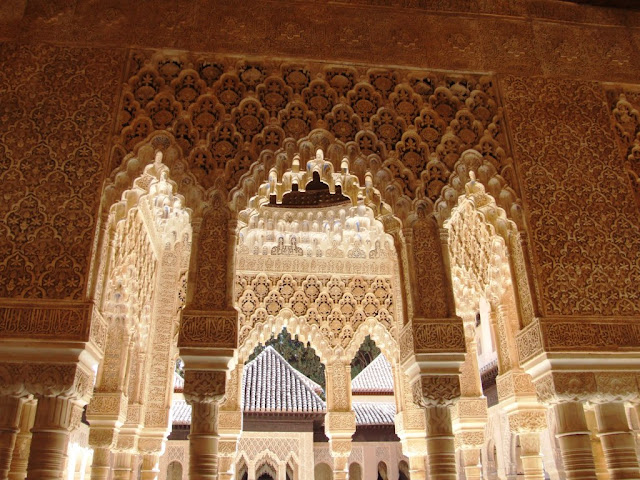 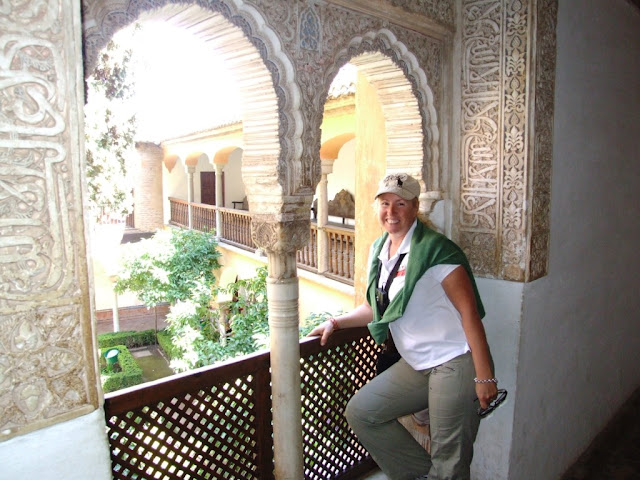 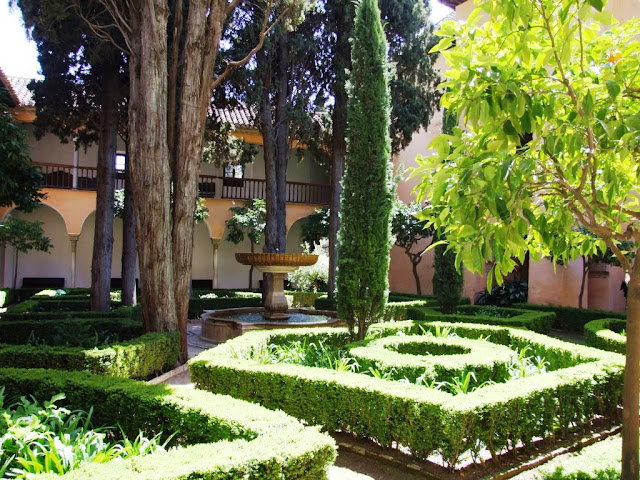 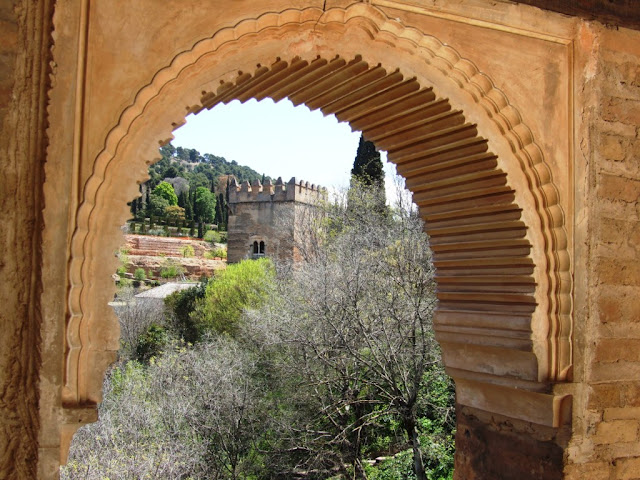 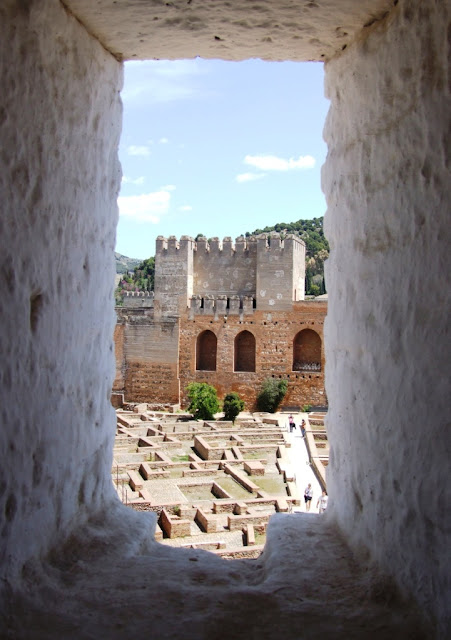 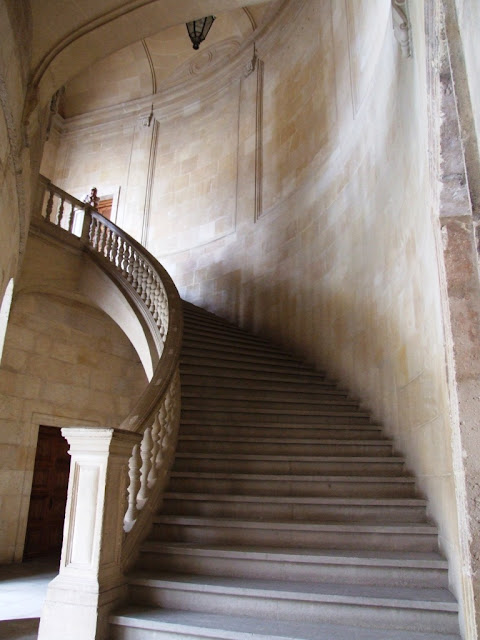 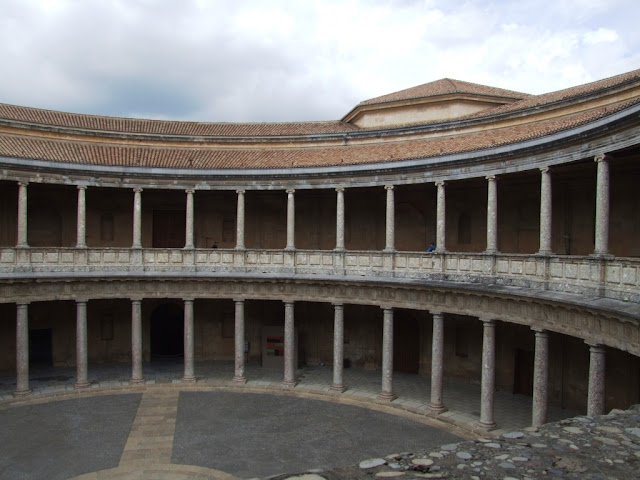 Next morning we were once more on the road east. This time heading to spend a relaxing week or so in a friends unit near Alicante. We met Sally on the Sail Indonesia Rally and spent some time travelling with her in Thailand before we all crewed on Curious in the Kings Cup Regatta in Phuket. Even though Sal was still tripping around Asia when she heard we were in Spain she very generously offered us the use of her apartment for a while. It was exactly what we needed. Somewhere to just stop moving for a bit while we worked on a new plan for the rest of the summer now that our crew spots on the yacht Astor had fallen through.

We were able to spend some time with Sally’s mum, Joan who lives across the street, enjoy the coastline and get down to some serious work on www.findacrew.net to find ourselves another boat to sail on. Thanks Sally. It was pure gold. 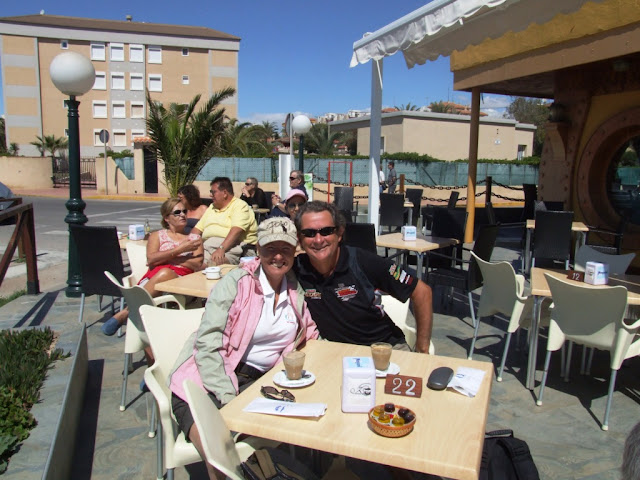