It was a tired Moksha crew that sailed off into the night from Sidi Bou Said leaving the North African coast behind on our way to Sardinia. We’d already put in a big day of work on the boat as we hadn’t been counting on having to do a night passage that evening. The good news however was that we had good winds forecast for the whole 157 nautical mile trip to the port of Cagliari and could expect to a fast ride.
The value of the Moksha’s A.I.S. (Automatic Identification System) was brought home again during Rob and Jayatma’s watch when approaching midnight our course crossed a traffic separation zone where commercial ships are funnelled into a lane each way. Virtually everywhere we looked there were ships lights. With the AIS we were able to plot their exact position, direction, speed and closest point of approach to us.  It also provides each ship’s name, size, port of departure and destination. One large container ship was shown as heading pretty close to us if we both maintained course and speed so Jayatma hailed them on the radio and asked if they could alter direction slightly to provide more of a safety margin. It’s amazing how much more courteous a response the big ships give to a female voice on the radio than a man. Nothing’s a problem, course altered with pleasure, have a nice sail. Depending on your point of view, it’s either chivalry or sexism alive and well at sea.
Later on Richard and Phil’s watch during the early hours of the morning we were called up by a patrolling NATO Naval Force hovering on the horizon and quizzed as to the boat’s registration, nationalities of those on board along with port of departure and destination etc. We assume they were on the lookout for illegal immigrants but luckily they saw no need to board us.
By next morning the strong winds had also blown up a fairly sizable following sea and Moksha was absolutely racing along consistently logging around fifteen knots. Ears certainly pricked up all over the boat as she started to pick up yet more speed. With Rob standing at the wheel calling of new highs from the speed log we eventually hit a peaking of 19.2 knots. It certainly qualified as exhilarating sailing  and not something we will quickly forget.

﻿﻿
Not surprisingly we made extremely good time and after dodging a couple of big tankers we entered the harbour at Cagliari mid morning after what ended up a 170 mile passage with our zigging and zagging.  Our marina berth was right in front of the main commercial centre of the city overlooked by Cagliari’s historic walled citadel area.  As usual there was a bit of work to do when we reach port which kept us busy for most of what was left of the day. We then headed to the Marina office to find out where the amenities block was to have a nice hot shower and hopefully get some laundry done. When we’re in a marina we look forward to a good long shower as opposed to the very quick, water conserving splash and dash we have when on the boat.
﻿
It turned out that such facilities were still ‘under development’ which translated means they hadn’t got around to building any yet. The building which housed the office itself was undergoing renovations with tradesman working everywhere but the marina staff suggested we could use their shower. Being seriously in need of tub after a day working on the boat in Tunisia, an overnight passage and another day of boat work including crawling around bilges we decided to take them up on the offer.
Directed to a small bathroom adjacent to the office we realised that A: It was the building’s only toilet, B: with a door each side it was actually the most direct route from the office area to the carpark where all the tradesman had their cars and tools, and C: the locks on those doors seemed very suspect. So Rob jumped in the shower first while Karen was kept busy blocking the entry at one door or the other of a constant stream of painters, carpenters, tilers, electricians and who knows who else. After a very quick shower Rob took over the guard duties while Karen set about taking the opportunity to wash her hair. No sooner was the shampoo in than the water went from toasty to glacier cold. Looking for the problem we discovered a hot water system mounted on the wall so small it resembled a thermos flask. Karen was a very chilled and an unhappy girl on the walk back to our berth. We enjoyed another meal off the boat that evening in a great restaurant tunnelled into the limestone hill. 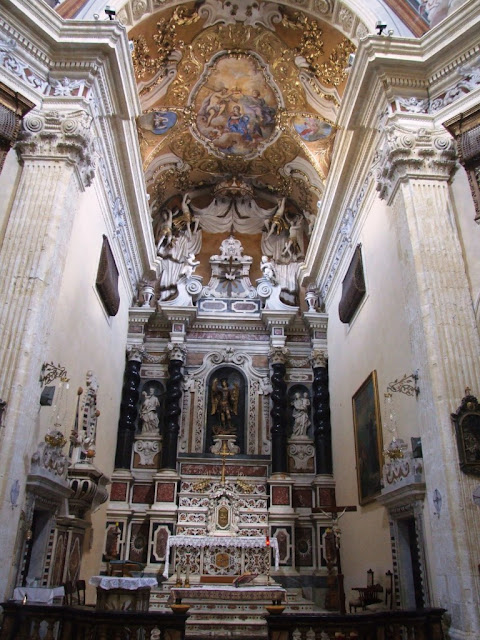 After missing out on our day to go tripping off to the Carthagean ruins in Tunisia we had expected to have the following day off but Richard had different ideas and came up with a lengthy jobs list the next morning. One of the items on the list saw us headed off in search of a Laundromat. A visit to the tourist information office and a twenty five Euro taxi fare chasing all over Cagliari led to the discovery that there’s no such thing. There are laundry services but with prices that of one euro per item we decided hand washing essentials was a better option and the rest could wait.
﻿
That afternoon Phil joined us as we escaped into town for a while and went exploring. The botanic gardens proved a little underwhelming but thanks to unlocked gate we enjoyed wandering into an underground tunnel system dating back to Roman times. It went back a long way into the limestone hill and still had channels which caried water to an aquaduct. If the gardens were underwhelming the Roman amphitheatre turned out to be outright disappointing with most of the ancient terracing now covered with tacky plastic seating.

Fortunately everything looked up once  we headed up the hill towards the old fortified city area. Passing a very old looking church we decided to poke our heads in for a look and discovered a very impressive baroque interior. One of the parishioners took a shine to Karen and was soon providing a comprehensive history of the church . She then actually took Karen backstage so to speak into the sacristy behind the altar where an incredible collection of renaissance art was housed. Needless to say Karen was in her element.

We then had a great time wandering around the narrow, ancient streets and through the watchtower gates of the old fortifications. When we got near the top we found another fantastic  underground café carved into the hillside and enjoyed a very nice bottle of wine before heading back down to the marina.

Next morning we were up early, picked up a hire car and hit the road to finally enjoy a full day off. We had considered hiring motor bikes but Karen was concerned the temperatures would be too cool to be comfortable so we settled for four wheels instead of two.  With a basic tourist map and Karen’s trusty I-pad in hand we drove along the coast with no firm plans other than to see more than just the area around the marina. We were rewarded with a series of spectacular headlands, bays lined with beautiful beaches, marinas for us to check out the yachts, old castles and a range of constantly changing scenery. The first wildflowers of spring were making in an appearance adding  an array of bright colours everywhere. 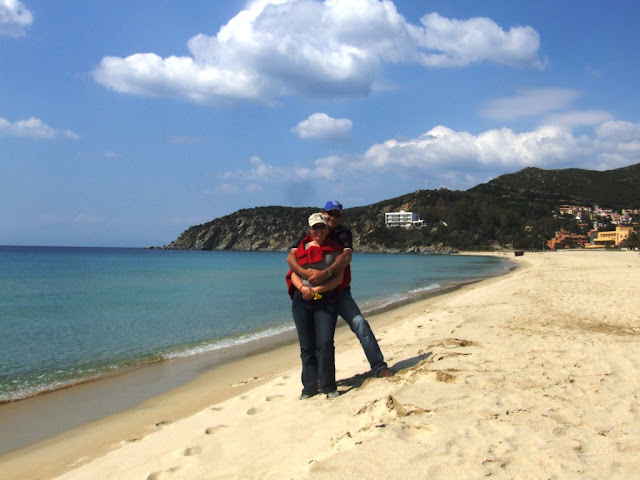 We could imagine the deserted roads, beaches and holiday complexes would be very different in the summer tourist season but we enjoyed having most places to ourselves. After a great meal in one of the small towns we headed for the hills, literally. We had decided to make our way back to Cagliari by climbing up and over the high mountain range in the centre of the island. The roads around the coast had been fantastic, wide and smooth with not a single pothole encountered. If we were regretting not hiring bikes on the coast, we were really cheesed off being confined to a car when we hit the mountain roads, absolute bikers heaven.  Much to her chagrin, seemingly every five minutes Phil and Rob pointed out to Karen how nice it would have been to be on bikes instead of the car.
﻿ Using the GPS and maps on Karen’s I-Pad we detoured off the highway onto some secondary roads and got a real taste of the Sardinian countryside driving through small mountain villages, giving way to shepherds moving their flocks and dodging cows grazing by the roadside. Having collected a nice bouquet of wild flowers throughout the day Karen suddenly realised that her chest was just starting to tighten up a little with asthma so suspecting the flowers she decided to get rid of them. Unfortunately, opening her window and throwing them out into the breeze when we were doing 80 kph was probably not a good idea. As the flowers went out, a haze of pollen was blown off them and straight back in her face. A mild asthmatic twinge suddenly became a bit more intense requiring a hefty dose of ventalin inhaler. (Note to self: Don’t do that again) 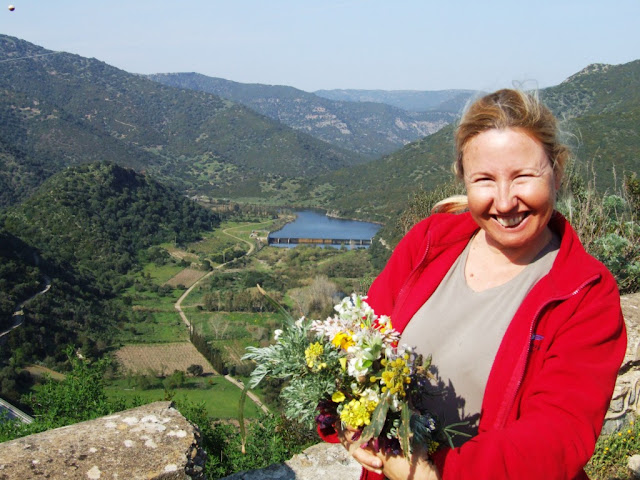 Apart from that one small faux pas, our Sardinian big day out was a fantastic break from the boat that we all really enjoyed – although it would have been better on bikes.

Well that was the plan, but when the wind refused to blow we actually settled for a very relaxing motor passage to the port of Carloforte on the small island of Isola di San Pietro just off the west coast of Sardinia itself. Here we tied up on the town wall and are surveying every forecast imaginable it was decided we would wait here the next day and set off again the following morning by which time the wind would hopefully start to pick up.

﻿
Another morning in port, another jobs list with cleaning, washing, research and studying systems manuals. Heads down, bums up, get into it and tick off all the boxes in time to take a walk around the very quaint town before being back on board to get dinner done. Then it was early to bed in preparation for a 5.00am departure in the morning. Mallorca here we come. 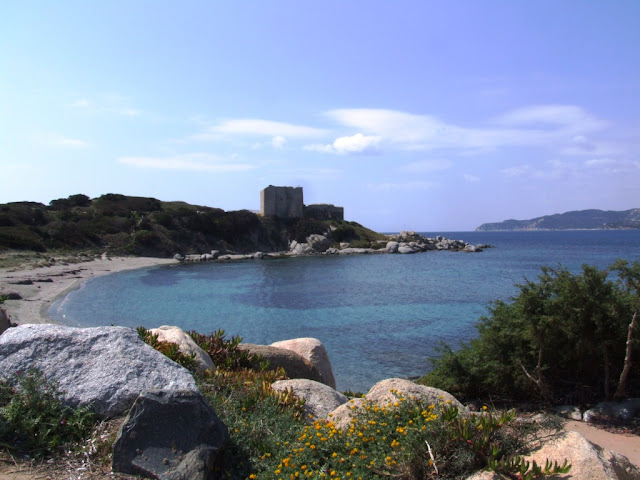