February 21-5  2012
The Bora wind eased overnight and by mid-morning had dropped enough that we were able to cast off the lines and leave the marina without the risk of being blown onto the dock, surrounding piles or nearby boats. Tim is very experienced at helming Moksha in confined areas and we were certainly impressed again at how skilfully he extricated the boat from a reasonably tight mooring in breezy conditions.

At last we were underway leaving Duino Castle and the snow capped Alps in our wake. A  month after arriving in Monfalcone we were headed south through the Adriatic Sea along the coast of Croatia towards the heel of Italy for a right hand turn towards Malta. We would then cross the Gulf of Taranto before skirting the Italy’s toe, crossing south of the Straight of Messina and then sailing off the Sicilian coast and on to the Grand Harbour at Valetta on Malta.  All in all we would be covering roughly 800 nautical miles and had our fingers crossed the usually nasty winter Mediterranean weather would be a bit kind to us.
Joining us for the trip was a Slovenian friend of Tim’s, Marko who is also a former employee of the Seaway company which produces the Shipman yachts. With five on board the crew was initially split into two watches with Marko guiding Karen and Rob and Tim providing the instruction for Phil. For the first couple of days we would be alternating the two watches every three hours which means sleep was going to be at a premium.

﻿
﻿With the risk of unexpected strong gusts from the lingering Bora, once clear of the channel we hoisted the mainsail with the first reef in place along with the full jib. Once well clear of the shore,  the prevailing 14 to 18 knots of North Easterly breeze saw us  getting along at consistently over 10 knots which gave us a little taste of Moksha’s speed.
Our first day at sea was largely taken up with getting a feel for the boat and becoming more familiar with her sail handling systems and our roles in the process. At 72 foot she is clearly the largest boat we’ve crewed on and, with her large sails, by far the most powerful. The forces at work demand your utmost respect and any mistake on a line, winch etc could have very serious consequences for boat and or crew. We were feeling nervous and a little daunted but both Tim and Marko were extremely helpful and patient with us. 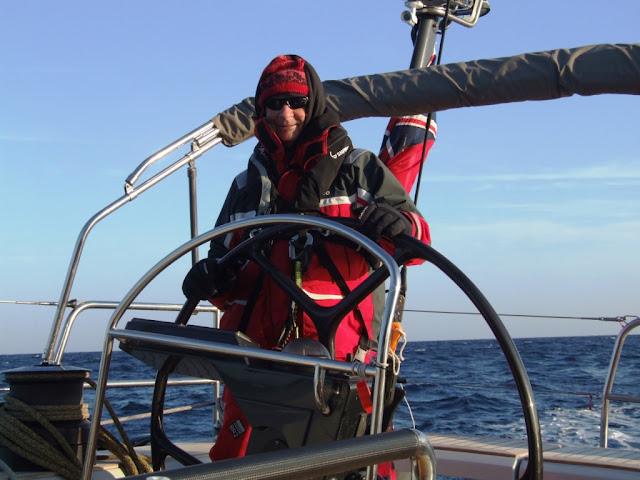 In a pattern that was to repeat itself almost endlessly over the next four days, the wind proved extremely variable. At times it blew strongly in the 20 to 25 knot range with gusts over thirty and at others dropped to almost nothing forcing us to fire up the engine. Most of the time we relied on the auto-pilot to steer the ship but we all got the opportunity to hand steer to become familiar with how Moksha behaved. Marko and Rob in particular spent many hours at the helm purely for the enjoyment of it. Despite topping 14 knots of boat speed on the gauge at one point, Rob had to concede the top speed award to Marko who hit 15 on one of his watches.
Most of our course had us staying well clear of the coasts with just glimpses of land in the distance so to speak but from Brindisi to Castrignano del Capo around the heel of Italy and then again passing Porta Palo di Capo Passero, we sailed quite close in and soaked up the sights as we cruised on by. In between we’d sailed just south of the Straight of Messina, the narrow water between Italy and Sicily. Here the wind is squeezed between the land masses and picks up pace big time giving us a fairly exhilarating downwind ride surfing the good sized swells. We had a good view of Sicily’s Mt Etna just on sunset and hoped Europe’s most active volcano might give us a show during the night but unfortunately she was feeling sleepy on this particular evening.

With a three hours on, three off regimen we started to feel a bit sleep deprived after the first couple of days and with the rough sea state Rob battled a bit of seasickness that he sometimes suffers at the start of a passage after being ashore for extended periods. It was also cold, very cold. Even during the day, we were well rugged up but at night both of us resembled red versions of the Michelin man.
﻿
﻿

We could of safely taken on anyone in a game of strip jack poker and won purely through having so much to lose. One night Rob counted up that he was wearing 22 items of clothing, 2 shoes, 4 socks, underpants, long johns, jeans, wet weather pants, t-shirt, thermal top, 2 woollen sweaters,  hoodie, beanie, wet weather jacket,  2 inner gloves, 2 motorbikes gloves and a life jacket.  Despite having more layers than a millionaire’s wedding cake we were still chilled to the bone after three hours on deck at night. We all wore life jackets on deck, not because the sea was so rough but because with the amount of clothing we were wearing we’d sink like a stone if we did happen to end up in the icy water somehow.  It also took so long to get dressed for a watch you had to set your alarm 20 minutes before handover just to get on deck on time meaning that much less sleep.
When day three dawned with clear skies and sunshine it lifted everybody plus with Tim now feeling confident enough to let us take watches on our own, we also all benefitted from getting some extended sleep breaks. Pure heaven.
Moksha had been setting a cracking pace most of the way from Monfalcone but the wind dropped out almost entirely on the final evening and we spent much of the last night motoring towards Valetta. After completing our midnight to three am watch we had the opportunity to sleep in but were out of our bunks early not wanting to miss seeing our approach and entry to Malta’s famed Grand Harbour.

Guarded by massive sandstone fortifications dating back to the early fifteen hundred’s when the Knights of St John made Malta their home for 278 years, Grand Harbour is a magnificent sight from the sea. Sailing towards the safety of the twin stone breakwaters we couldn’t help but think of those vessels that had passed before us, everything from the ancient trading galleys and square riggers to the brave merchantmen who survived the Nazi onslaught as Allied convoys fought their way through to relive the island in WW2 that had followed our exact route. Sailing under the forts towering over us on all sides entering  Grand Harbor we were very aware that we were surrounded by living history.  With a ten days or so planned for this stop we were really looking forward to exploring beyond those huge walls as soon as possible. 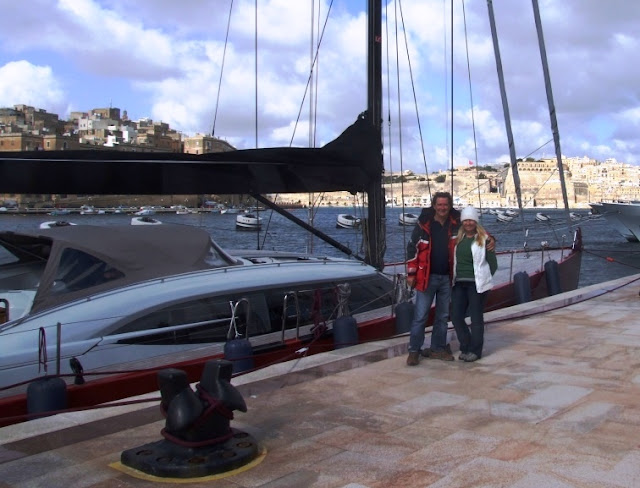 We had a berth booked at the Grand Harbor Marina and were guided into our mooring by the mariners to end our first passage on Moksha. She was placed right in the highest profile spot in the marina. Tieing up right alongside the stone wall by the promenade and straight over the narrow street from the Casino and string of Cafes we quickly drew a small crowd of onlookers.  We then spent the next few hours cleaning  and squaring things away because if Moksha was going to be in pride of place we were all determined she was going to look her best.
At last five tired bodies  headed off the boat for a much anticipated English breakfast. For us it was still hard to believe that we were really living our Mediterranean dream and actually sitting in a 500 year old square in Malta with a plate full of bacon, sausages, eggs and hash browns.
Life is good!